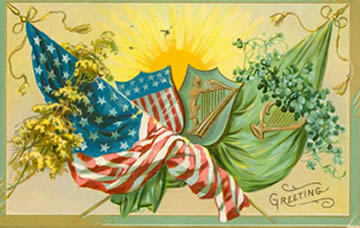 Each year on March 17 people across the United States celebrate St. Patrick’s Day and their Irishness or faux Irishness, as the case may be. It may come as a surprise, however, that at Notre Dame, the home of the Fighting Irish, the University’s founder, Father Edward Sorin, CSC, actually banned observance of the holiday.

Although St. Patrick’s Day is a traditional feast day in Ireland, the holiday as we know it is a uniquely Irish-American phenomenon. In the 19th century, however, March 17 raised some interesting tensions for Irish immigrants. Native-born U.S. residents were already suspicious of Irish Catholics, who were viewed as having allegiance to a foreign power — the pope. Celebrations of Irishness were viewed as further evidence that the Irish were not American and were a potential threat. It was to combat this perception that Father Sorin, who famously sponsored Fourth of July celebrations for the South Bend community to prove American loyalty, forbade the observance of St. Patrick’s Day.

Of course, Irish immigrants have been coming to America since long before there even was a United States. An estimated one-quarter to one-half million people emigrated from Ireland between 1700 and 1820, many of whom were Presbyterians from the Ulster Province of Northern Ireland. Immigration continued to increase in the 19th century, particularly during the famine and post-famine periods. In the decades before the Civil War, an estimated additional 2 million Irish, mainly Catholics from the provinces of Munster and Connacht, came to the United States.

According to the 2008 census, more than 36 million U.S. residents claim Irish ancestry today. Although individuals and families within particular waves of migration held some commonalities, Irish immigration to America has always been remarkably diverse, including varied religious traditions (such as Anglican, Baptist and Quaker), social classes from all along the economic spectrum, and different occupational backgrounds, both skilled and unskilled.

Historically, an acute bias existed against the Irish, particularly for Catholics arriving in the late 19th and early 20th centuries. The sheer volume of these immigrants, along with their frequent state of destitution in the post-famine era, caused them to be held in low regard by native Americans. There were tensions that the Irish would replace Yankee workers in mills, a justifiable concern as increasingly cheap foreign labor displaced native-born help. The fear of losing jobs was particularly acute in Indiana. The Know-Nothing Party was a nativist political movement with a strong presence in the state. When Irish as well as German workers came to the Midwest during the building of canals, many citizens joined the Know-Nothing organization and denounced these immigrant laborers

Irish-American identity has ebbed and flowed throughout history, often in tandem with political and social events in Ireland. Traditionally a feast day in Ireland, St. Patrick’s Day in America with its attendant parades and pageantry became symbols of Irish power and pride, ritual reaffirmations of Irish community solidarity, and vigorous protests against prejudice and the rising tide of nativism in the United States. Frequently hosted by local chapters of the Ancient Order of Hibernians, Clan na Gael or the Knights of Columbus, St. Patrick’s Day events were often tinged with controversy as the leadership of these organizations sought to negotiate the dual loyalties of Irish immigrants to both Ireland and America.

Second-generation immigrants experienced their mixed allegiances especially acutely as nativists charged that American-born Irish could have only one loyalty, to America. It is important not to oversimplify the complexities of Irish immigrant experiences in the United States. Nevertheless, St. Patrick’s Day has often served an important role in asserting Irish identity.

Over time, St. Patrick’s Day has become an American holiday. As an amalgam of old world customs and uniquely American traditions, the day continues to be about community — a transatlantic community in which both Ireland and America are celebrated.

At the time we first published this essay in March 2010, Deborah Rotman was the director of undergraduate studies in Notre Dame’s Department of Anthropology. She is now the Stefanick Faculty Director of the Flatley Center for Undergraduate Scholarly Engagement. Since 2006, she had been studying an Irish immigrant neighborhood south of campus known as “Sorinsville.” The neighborhood was developed by Father Sorin in the 1850s as housing for Notre Dame employees. In an effort to better understand the Irish diaspora, for several summers Rotman has taken ND students to Ireland to help her conduct archival research and collect oral histories.