I remember watching an episode of Scrubs one time where the young doctors were racing against the clock on a Friday afternoon to find answers for a patient before the inevitable slowdown of the weekend struck. Before I worked in a hospital, I assumed this was an exaggeration. When I graduated from residency this past summer, though, I could attest: It’s definitely not an exaggeration. You should do your very best to have medical emergencies on Monday mornings, whenever possible. 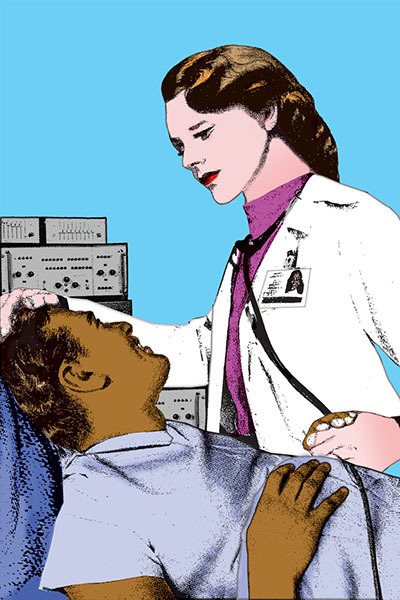 On one Friday afternoon during my time as a family medicine resident on the west side of Chicago, I was myself trying to find answers for a patient before the inevitable slowdown of the weekend struck. My patient was a homeless, older, African-American man with prostate cancer and HIV and — now — a broken hip. His X-rays required no medical training to read and lament. He needed surgery, a difficult operation that would require equipment our community hospital would need to beg and borrow from other places.

I spoke to one of the few orthopedic surgeons on staff at our hospital — a fellow Notre Dame graduate — about the case. We agreed that if the surgery were to be done on the timeline the patient required, transferring him to one of the surrounding tertiary care centers was the best option.

The Friday afternoon wore on as I sat on hold with various nearby care centers. Polite transfer nurses listened to my plight. “Oh, dear. Cancer? HIV? And he’s homeless?” There was no lack of sympathy for the patient. No lack of understanding regarding the need to fix his broken hip sooner rather than later to prevent blood clots, complications, total debility. There were just no beds. Or so I was told.

Finally, I reached a nurse at a large university center who threw up a Hail Mary and let me talk to the senior orthopedic surgery resident. By this time, I was bracing for failure. I recalled the more common surgeon stereotypes — the not-so-flattering ones — and prepared to be told “not my problem” by a frat boy named Brice who was headed to the gym before his big weekend of watching sports and crushing beer cans against his head. (Not my proudest moment.)

When the orthopedic surgery resident got on the line, I quickly realized he would debunk my Brice stereotype in a big way. Hearing his thick Jersey accent on the other end, I also realized I was talking to a fellow transplant. He listened to the patient’s history and hospital course. He sympathized. He acknowledged the reality that if this patient did not get his surgery in a timely way, serious complications and compromises to the quality of his remaining life would result.

“Trish,” he said, “just get me those X-rays, and I’ll get him here somehow.” He gave me his cell phone number. The same first three digits as mine, which I took as a reassuring sign.

Later that day, the transfer nurse from my New Jersey compatriot’s hospital called me back. There would be hurdles and condescension from various gatekeepers. I discovered that my patient had the wrong insurance, the wrong combination of diseases, and the wrong timing for a prompt and efficient transfer of care. I was called “sweetheart” with alarming frequency.

Sleep deprived, I cried into the warm Diet Coke by my computer and told my intern buddy, “I’m just going to pull really hard and then duct tape this hip by myself.”

Eventually I dried my tears. I downed my warm Diet Coke, 16 hours still ahead of me. My cell phone rang. There was a Jersey accent on the other end.

“Hey, Trish! What happened?” the orthopedic surgery resident asked. I summarized the gatekeeping, the politics. I left out the tears, the duct tape.

“That’s garbage. Don’t worry. I’ll get him here. Give me a few minutes.” We hung up. There was an understanding in the Jersey voice on the other end that I did not expect.

For me, caring for underserved populations was the main reason to become a physician, and my Catholic faith is part of what drives me to care for patients like the one I was so monomaniacally trying to aid on that recent Friday afternoon. In my training program, I was surrounded by like-minded family physicians, brought to the west side with similar vocations.

Admittedly, I was surprised to sense the same drive in a surgeon. Like-minded people, I learned that afternoon, are not limited to family medicine. They crop up in every medical specialty and in every line of work. The next morning, I Google-stalked the orthopedic surgery resident and found a listing of his undergraduate institution.

The University of Notre Dame.

I smiled when I saw it. I thought about the good fortune of talking to two Notre Dame orthopedic surgeons in one day, neither of whom I could fathom saying, “Not my problem.”

And my Jersey compatriot had prevailed. The transfer team arrived later that night. Our patient was promptly transferred to one of the best hospitals for orthopedics in the world. He had his hip replacement surgery that weekend.