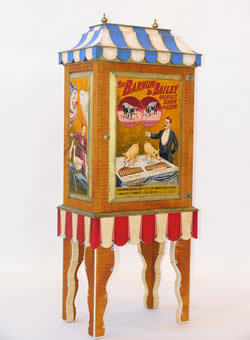 Say “research,” and most people think experiments, books and papers. But in Robert Brandt’s case it may be a cabinet that looks like a circus popcorn machine or a massive, magnificently detailed mahogany and ebony cabinet housing rare books. Trained as a wood sculptor, the director of the School of Architecture’s furniture design concentration has constructed nearly 100 pieces of fine furniture since joining the faculty in 1992.

Brandt’s “research” ranges from mahogany cabinets and poplar tables to ornate maple beds and walnut chairs. With nearly every piece, he says, he learns something new to pass on to his students: a seamless method to apply mahogany veneer to a column, for instance, or a “lost” traditional process of ebonizing wood with vinegar and steel wool.

Most of Brandt’s creations are functional, working furniture, but some pieces, such as his “Tall Chair Series,” are purely aesthetic sculptural forms in the guise of furniture. The first in this ongoing series, which now numbers around a dozen, was a visual pun on the concept of a “tall tale.” To render the theme, Brandt elongated the chair’s legs and incorporated carved wooden books in the design of the chair’s crest rail and seat.

The Notre Dame furniture maker says he especially enjoys incorporating whimsy in his art pieces. The circus cabinet pictured here, for instance, features stylized elephant legs and panels painted to resemble circus posters. The top of the cabinet resembles a big-top tent. It was done last year as a speculative piece for an art show at Louisville’s Chapman Friedman Gallery. Brandt had just completed an intricately carved curly maple bed with ebonized scroll work, moldings and buttons that had required more than 1,500 hours of intense labor. Afterward he felt the need to change gears. “I wanted to take a break and have some fun,” he says. “And I thought about taking kids to the circus and what fun that is. So I thought I’d ‘go’ to the circus with this piece.”

The artisan’s most ambitious project has been the mahogany and ebony cabinet that houses the Hitchcock Collection of architecture books published before 1895 and the Park List, a collection of rare, pre-Revolutionary War books on American architecture. Begun nine years ago, the intricately carved cabinet, which is in the Bond Hall Rare Book Room, was finished this fall.