I am writing this thanks to the electricity generated by Notre Dame’s power plant. Notre Dame, it turns out, was the first university in the United States to generate electricity, thanks to a tiny generator that powered eight lights in the Main Building beginning in 1881. Power needs grew and grew so much that the university built its own power plant, whose familiar smokestack rises amidst the skyline on the north side of campus. 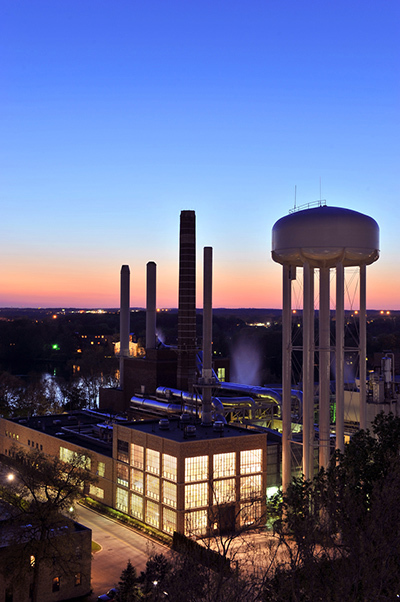 That is about to change. In September, Notre Dame President Father John Jenkins announced that the University’s power plant will be phasing out the use of coal by 2020. Coal will still help power the university to the extent that half of our power is generated by off-site utilities that rely on coal (albeit in shrinking amounts). At the same time, the University will be investing over $100 million in projects that will reduce CO2 emissions by 47,500 tons.

Other universities have taken similar steps without generating national publicity. Notre Dame is different, because its announcement coincided with the visit of Pope Francis and his message of a religious obligation to care for the natural environment.

Notre Dame’s action has three advantages that reflect, and even transcend, the remarks of Pope Francis. First, it explicitly relies on a moral understanding of our relationship to the natural environment. As Father Jenkins explained, the recent papal encyclical articulates “a comprehensive moral vision about the environment, technology, the character of our communal lives, our responsibility to the poor and marginalized, the dangers of compulsive consumerism and the need for global solidarity.”

The no-coal announcement prompted Gina McCarthy, the administrator of the U.S. Environmental Protection Agency, to make an impromptu visit to campus. (Coincidentally or not, McCarthy arrived at Notre Dame the day before her alma mater, the University of Massachusetts, played the Fighting Irish.) McCarthy praised the University’s decision as an example of an institution “putting its investments where its values are.”

Not everyone shares those values or that moral vision. More tellingly, not everyone likes the idea of relying on any moral vision. One political consultant labeled the moral approach as “toxic” when applied to the rough-and-tumble politics of the United States. And the Supreme Court recently implied that moral visions have no place in public policy, even as Pope Francis called on Congress and President Obama to act pursuant to such a vision during his visit. The praise that Notre Dame earned from EPA administrator McCarthy and other government officials offers hope that the moral questions that are so frequently discussed on campus will once again find a home in our national discourse.

Another virtue of Notre Dame’s plan is that it is incremental. The University is not quitting coal cold turkey. It will burn its existing supply of coal as it transitions to other sources of energy.

This incremental approach recognizes that burning coal is not necessarily evil. Coal has produced countless benefits to generations of people around the world. It has fueled economic development that has lifted millions of people out of poverty. Now we are cultivating alternative sources of energy, but at this stage even so-called green technologies can have not-so-green results. Wind turbines kill birds and solar facilities displace wildlife habitat. A careful transition allows us to improve on alternative, renewable sources of energy while cushioning the blow for communities that have relied on coal for so long.

Notre Dame’s plan is also humble. It recognizes that there is no perfect way to produce energy. So while the University burns more natural gas as it reduces its use of coal, it is also building geothermal systems, constructing a nearby hydroelectric dam and exploring solar energy sites.

Pope Francis has rightly been praised for his humility. The American way to exercise power would accept an opportunity to dine with congressional leaders rather than lunching with the homeless, as the pope chose to do during his time in Washington. But in his remarks to Congress, Francis exhorted courage, not humility.

There is a certain appeal to the call for courage when confronted with global environmental challenges. Yet humility, not courage, offers the better approach. The Catholic tradition has celebrated humility at least since St. Thomas Aquinas characterized humility as the greatest of virtues nearly 800 years ago. Humility reminds us that our limited knowledge of the world often leads to harmful environmental impacts. At the same time, humility reminds us that lawmakers and even expert administrators have a limited knowledge of the effects of our efforts to regulate those harms.

Therein is the tension: The same humility that reminds us not to harm the environment must also be exercised in our efforts to avoid that harm. Notre Dame’s decision to phase out the use of coal illustrates one way of resolving that challenge by relying on voluntary decisions inspired by its moral commitment. The task is far more difficult for the EPA’s McCarthy, who must seek to solve today’s environmental problems within the bounds of laws that were written decades ago with different problems in mind.

President Obama thanked Pope Francis for reminding us of our “sacred obligation to protect our planet, God’s magnificent gift to us.” We need such reminders. Then we can imitate the humility that Pope Francis demonstrates as we seek the answers to our interrelated environmental and social challenges.

John Copeland Nagle is the John N. Matthews Professor of Law at the University of Notre Dame.