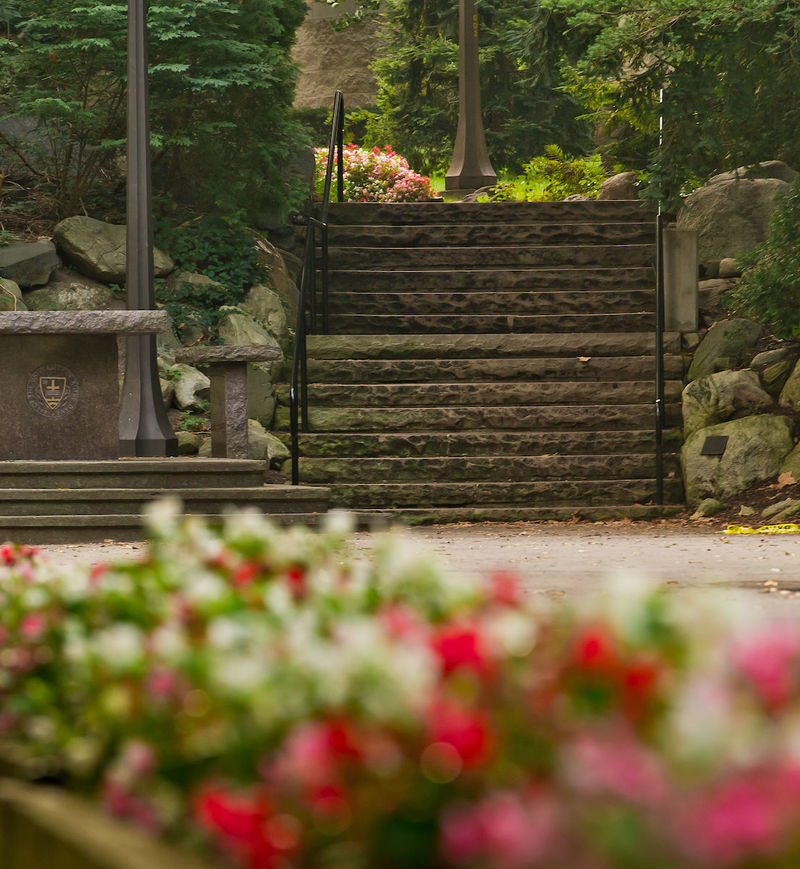 Does the pattern of the Grotto steps (above) or the Sacred Heart basilica door (below) reflect a “golden proportion” by coincidence or design? Photo by Matt Cashore ’94

Editor’s Note: Our latest Magazine Classic comes from 2009 but reaches back to ancient times to calculate the “divine geometry” that Father Bob Austgen believes underlies the layout of the Notre Dame campus.

So here you are, sitting on a bench by Notre Dame’s Main Building, trying to figure it out. You are looking — ring-binder across your lap — at campus maps and diagrams, photographs and mathematical formulae, trying to understand what it all means. You are sitting with Bob Austgen, the Holy Cross priest who has apparently deciphered the code, who now sees the hidden meanings.

It’s quite an elaborate scheme, suggesting that campus was originally mapped using a “divine geometry,” that buildings and statues were placed according to solar movements, that ley-lines — those invisible seams linking ancient ceremonial sites and believed by some to resonate with electrical or magnetic forces — intersect in front of the Main Building.

So the two of you are poring over the evidence Father Austgen has gathered, measured and charted to overlay a whole new dimension to what you have known all along: The Notre Dame campus is a very special place.

Austgen’s explanation begins with ancient Greeks who saw mathematical symmetry in the universe and devised a mathematical system, called “gematria,” they and ancient Hebrew priests of the Kabbalah practiced. This system assigned numbers to characters of the alphabet, giving words a numeric value.

“It was a double-read,” says Austgen. “It prompted a remarkable, fascinating, magical-mystical, alpha-numeric language that escapes most of us today.” But to practitioners (including Christians in later centuries), a correspondence between the word and its numerical equivalent was meaningful, and that meaning would be found in nature and expressed architecturally.

For example, the biblical phrase Lord (800) Jesus (888) Christ (1480), adds up to 3,168, a number consistent with other biblical appellations and a measure found throughout European church architecture and at the Acropolis in Athens.

Leonardo da Vinci, Austgen explains, incorporated such dimensions into his art and architecture. He thought it “godlike” to “square the circle,” or to design a circle in a box. The Earth, whose diameter is 7,920 miles, would be enclosed in four-sided box with 7,920-mile sides — a box whose perimeter is 31,680.

Medieval artists and architects, says Austgen, were fascinated by the elegance of such measures and often designed sacred structures accordingly. So, too, the original visionaries of Notre Dame. “The major buildings during the Sorin era,” he explains, “all emulate these medieval sensibilities. The basilica is a study in lunar numbers, while the Main Building reflects Earth dimensions. . . . The design of sacred buildings and the grids upon which they were built always involved a relationship to the author of the cosmos, the prime geometer.”

Austgen goes on, digging deeper into Notre Dame’s past, into the transactions of Catholic priests carving out plots in the Potawatomi frontier. He talks about the missionary priests, Badin, De Seille and Petit, and what they knew of “magic squares” and “The Brittany Measure,” the “Hermetic code” and the “Sacred Canon of Proportions” and the deliberately calculated locations of property lines, buildings and cemeteries at Ste. Marie des Lacs.

One of those priests, Benjamin-Marie Petit, grew up near the famous megalithic sites on the Brittany coast. Researchers suggest that these stone alignments, the most famous being Carnac, had astronomical orientations and exhibited “earth energies,” according to Austgen. Petit studied theology in Paris at Saint-Sulpice (of recent DaVinci Code fame) where he was a classmate of Alphonse Louis Constant (aka Eliphas Levi of Kabbalah notoriety). The seminary taught the Hermetic arts, says Austgen, which dealt with magic squares and other sacred codes evident at holy sites as diverse as the Temple of Solomon, the Temple of Zeus at Olympia, the pyramids of Egypt, the Colossus of Rhodes and . . . . well, Notre Dame.

Stephen Badin, Austgen says, followed Petit’s lead as he mapped the place that would become Notre Dame according to a kind of Badin Code, reminiscent of the “Brittany Measure,” whose integral number — its “golden proportion” — is 618. Is it coincidence, he asks, that the stairs descending from Sacred Heart to the Grotto reflect a 618 pattern? Or that, if you take a GPS measure outside the memorial doorway of Sacred Heart, then divide the latitude by the longitude, you get 618? Or that so many distances of the core campus and its cemeteries measure 3,090 — or 5 times 618 feet? Or that Petit’s original scheme also locates the energy line, or ley-line, we know today as Notre Dame Avenue?

Austgen will tell you that — by dowsing and swinging a pendulum — he has identified echoes of the Carnac magnetic phenomenon right down Notre Dame Avenue to Cedar Grove Cemetery. “The Notre Dame campus,” he maintains, “is found at the intersection of two powerful ley-lines, extending across the American continent and running through cemeteries, Indian mounds, pyramids and the sacred sites of cultures existing thousands of years ago.”

On June 21, 1999, Austgen discovered something else. At 5:25 a.m., the day of the summer solstice, sunrise cast a shadow from the side minaret onto the exact center of the capstone of the basilica’s central bell tower. Further investigations revealed that other campus landmarks matched other significant solar and lunar paths.

And this, too: The original campus blueprint, says Austgen, reflects “the divine proportion,” or “the golden mean,” a mathematical ratio found in the spirals of galaxies and Nautilus shells, in the behavior of light and atoms, in the patterns of plants and skeletons of animals, in the architecture of Teotihuacan in Mexico and the Great Mosque of Kairouan, in the music of Beethoven, Bach, Mozart and Chopin, and in the designs of Michelangelo, Raphael, da Vinci and Salvador Dali. It intrigued Pythagoras, Euclid and Kepler, is inscribed in pentagrams and, according to Austgen, it is etched into the Notre Dame campus.

Wow, what fun, you think, still taking all this in — and how much more fun to think it could all be true.