Actor Dan O’Brien ’99 was tailgating before the Notre Dame at Stanford game last Thanksgiving weekend when a fellow tailgater began gesturing wildly in his direction and approached him.

As one of the co-stars of Whitney, NBC’s hit ensemble comedy (think Friends) O’Brien has had to adjust to being recognized — and sometimes accosted — by fans.

But this fan did not recognize O’Brien from the show. He was absolutely certain he had come upon the Fighting Irish leprechaun mascot — traveling incognito — and was determined to unmask him. “Yes you are! Don’t lie! I know you are!” the man insisted.

“I suggested the man might be thinking of the Xerox commercial that plays during Notre Dame games,” O’Brien recalls, chuckling. In it, O’Brien’s character discusses photocopying with a cardboard cutout of the leprechaun. “See! I knew it!” the man announced triumphantly before asking O’Brien to pose for a photo with him.

When O’Brien traveled to his native Alexandria, Virginia, for Christmas — he is part of a large, close-knit Irish-Italian family — his cousins stopped by to have photos taken with him, “so they could prove to their friends we were related.”

Such attention, though flattering, seems to have little effect on O’Brien, who recently moved his family from New York City to Los Angeles, where Whitney is filmed. Despite being a seasoned pro — his resume boasts an impressive array of stage and screen credits — the 34-year-old actor displays none of the self-absorption one might expect from a guy on the fast track to Hollywood stardom.

He’s just jazzed to have the gig. 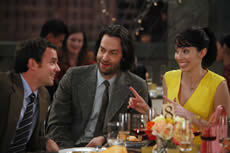 Working on a sitcom filmed before a studio audience, “is the best of both worlds,” O’Brien enthuses, “It’s like live theater — but with do-overs.” In addition, he says, “It’s the best schedule in Hollywood. You go to work every morning and come home every afternoon.” Whitney allows him to spend “more time than ever before” with his wife and three children.

His acting life wasn’t always so cushy. Before he landed the role on Whitney, O’Brien spent 10 years in New York — primarily on the stage. He worked “every odd job under the sun.” Some part-time jobs were what one might consider typical for an aspiring actor — waiter, bartender, theater manager, extra on Law and Order — others were more unusual, such as supernumerary (nonspeaking actor) in productions at the Metropolitan Opera.

“As an actor you are always having to quit jobs when you get a play,” O’Brien says, “so I was always on the make.” One of the “craziest” jobs was “working as an undercover spy for a private eye firm.” O’Brien’s job was to track down and tally the number of knock-offs (counterfeit products) in Chinatown. “They hired a lot of out-of-work actors,” he explains. To avoid being recognized, “we had to wear really silly costumes.”

Despite the odd jobs, “I was always sort of ‘making it’ as an actor in my mind because I was always working on a play,” O’Brien says. His break came when he was doing a play with friend Michael Hannon, who “took me under his wing and introduced me to his agent,” O’Brien says. “I owe my career to him.”

That agent helped O’Brien get commercial auditions and finally “break into the business” (defined as getting paying work) when he was hired to do a commercial for America Online in 2004. “I thought I’d be on easy street,” he recalls, “but in fact they hardly played it. I just barely covered my union entry fees.”

As his reputation grew, more work followed. “About five years ago I started making really good money doing commercials — conveniently around the time I started a family,” he says. But easy street wasn’t always easy for the stage actor who had labored long and hard for the purity of his craft. O’Brien struggled with nagging doubts: Had he “sold out” by doing advertisements?

“I had a moment when I walked into my commercial agency and told them I couldn’t do it. I told my wife we needed to give back the money I’d made. She was pregnant with our first child at the time. She was nearly in tears. I prayed about it and asked God to give me a simple answer. I talked to my parents’ priest. Finally, one guy, Father David, said, ‘Get a grip. Keep doing the commercials — you can use your money to do good things.’”

He met his wife, Julie Shavers, a playwright and fellow actor, in 2002 when he answered a casting call in Back Stage magazine for a play she had written. At the audition, he recalls, “Julie told the director she had to cast me, because she was going to marry me.” O’Brien says he “knew” too, by the play’s second rehearsal. The couple has produced four plays together, including Silver Bullet Trailer, written by Shavers. They were married in 2005 and have three boys, Ammon, 5; Ivie James, 3; and Austin, 1.

O’Brien says the couple’s decision to move to Los Angeles was “a leap of faith. I prayed a lot about it. My sister-in-law is fond of saying ‘the Lord takes care of babies and fools,’ so I figured I was covered on all fronts.” Former classmate Andrea Kavoosi ’99 covered one front, introducing him to Vikram Dhawer of Authentic Talent and Literary Management, who became his agent in L.A. Dhawer worked to get O’Brien many film and television auditions — including the one that earned him the role of Mark on Whitney.

“As soon as I watched his commercial reel,” Dhawer recalls, “I knew I wanted to work with him because he was ‘that guy’— the guy I had seen in multiple commercials who was always funny and interesting enough to actually make me pay attention to the commercial.”

O’Brien credits Dhawer with also steering him toward more creative ways to get work — such as video auditioning for roles. With the advent of YouTube, if an actor wants a part nowadays, O’Brien says, it’s not uncommon for him to videotape himself reading the part and send a video link to a director or casting agent. One online audition caught the attention of actor/director Clint Eastwood — and nearly landed O’Brien a part in the film Gran Torino.

Even live auditions that don’t pan out are not a waste of time, O’Brien says. “If you do a good job and maybe aren’t exactly right for a part, a director will remember you and you could get called for something else.” Such was the case when O’Brien auditioned for Ben Stiller, who was directing a television pilot. O’Brien didn’t get the role, but Stiller was so impressed with O’Brien’s reading that he hired him to participate in a reading of a film script by Aaron Sorkin.

O’Brien admits he was a little star-struck when he arrived at Sorkin’s Hollywood Hills home to find a room full of well known actors with whom he’d be reading. Despite being on a successful prime-time sitcom, O’Brien has trouble even now imagining himself a peer to legendary actors. Achieving celebrity later — rather than sooner in one’s career — “keeps you humble,” he says.

On Whitney, O’Brien plays Mark — an irreverent, girl-chasing, commitment-phobic police officer with a penchant for blurting purple prose. O’Brien, in contrast, is a devoted husband and father and devout Catholic who recently put his two older boys in “timeout” for calling each other “dummies.” His children are not allowed to watch the show — too adult.

The day after an episode airs, O’Brien says, he is often teased by friends about the “dirty” things he says on camera. But, O’Brien adds, “I like giving this guy a voice. He has a point of view, and I want to show it . . . to show how he got there.”

Whitney Cummings, O’Brien’s boss as well as co-star, says, “I saw hundreds of actors, and he had the job when he said the first line in his first audition. He was so fresh, so real, so inherently funny. I knew I had struck gold.”

As the character evolves, viewers get to see Mark’s vulnerability, and O’Brien’s influence. In one episode, Mark is a Notre Dame fan (O’Brien, whose father, grandfather and brother are also ND grads, lobbied for it in the script). In another, Mark lets slip that he’s not as sexually experienced as he’d claimed. When he’s called on it, he explains he was raised Catholic — and considers “the act” to be something “special.”

Cummings says she is “the most protective of the role of Mark because secretly Mark is me and all my propaganda. Mark is a very complex character who keeps unveiling new dimensions that I think are surprising everyone . . . watching him negotiate who he thinks he should be with what makes him happy.” On O’Brien’s influence, Cummings deadpans, “Dan’s real life isn’t much of an inspiration, because from what I know he just constantly churns out children.”

Bitten by the acting bug in 7th grade after landing a part in a school play, O’Brien began acting lessons, fell in love and never looked back. In high school, “I did all the plays and really found my group of friends there.”

He landed his first professional role — lead in an off-off-Broadway play — the summer after his sophomore year at Notre Dame. Today his resume reflects a solid balance of stage and screen work, plus a few special skills — “stage combat,” “accents” and “an unbelievably realistic cricket sound.” A lifelong musician and composer, O’Brien enjoys playing piano and guitar, and still plays in a garage band “when my wife is out.” He also plays the trumpet, an instrument he played in the Notre Dame Marching Band his freshman year.

O’Brien hopes to do more writing and directing, and is currently at work on a screenplay with fellow Notre Dame alum Pete Cilella ’99. He would also, someday, like to write a script “about the Catholic experience . . . being Catholic . . . from a liturgical point of view. So much is happening right now . . . changes to the Mass. I would really like to explore some of that.”

Liz (Woyton) Warren is a freelance writer and lifelong Irish fan. She lives with her husband in Southern California.