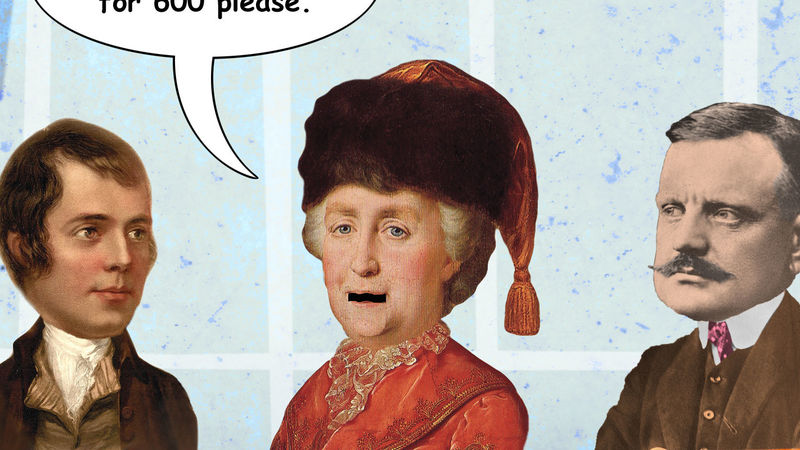 They call this the Golden Age of TV for a reason. There are more great TV shows across more platforms than at any time in the history of the medium. Everyone, it seems, has a particular favorite, the one they’ve set to record permanently on their DVR, the one they can’t resist shoehorning into conversations, the one they post about online to the point where you wonder if they’ve gone crazy. Seriously, have you been to a dinner party lately? TV seems to be the only thing we as a species have in common anymore.

I have one of those shows, too, but it’s not Game of Thrones or The Walking Dead or whatever the new Netflix binge series is this month. My favorite show, the one I tweet about and scour message boards for, the one I could deliver an oral dissertation on with the flimsiest of pretexts, is a syndicated half-hour game show that has been on the air continuously for longer than I’ve been alive.

I speak, of course, of Jeopardy!, the quaint game of answers and questions that has become an American institution. I know you’ve seen it. Even if you only catch it when you’re visiting your parents or the dentist, everybody has seen Jeopardy!. From “Weird Al” Yankovic parodies to Saturday Night Live skits to that episode of Cheers where Cliff Clavin gets his dream board but blows it all in Final Jeopardy, the show is firmly entrenched in our cultural memory.

My obsession with Jeopardy! started in childhood, when family dinners would be scheduled around the show’s 7 p.m. timeslot on WABC so we could sit together and watch, shouting answers at the screen. As a precocious young lad, I derived no small satisfaction from the rare occasions when I could answer a question my parents could not.

That’s the appeal of the show in a nutshell — it’s a place where knowing the right answer is celebrated. No matter what the subject, there has never been a time when Alex Trebek looked at a contestant like they were a weirdo just because they knew a lot about sitcoms or vice presidents or the periodic table. Let me tell you, this has not always been my experience.

The show also doesn’t judge the contestants on their occupation, address or income. When I was a kid I never noticed or cared about the job titles that were announced at the beginning, but now that I’m a working stiff myself, they add a dimension to the gameplay. Will the bartender be able to outsmart the corporate lawyer and the college professor? Will the high school teacher get a category in her subject and be able to take advantage? Who knew that truck driver would know so much about Italian operas?

Like most great dramas, Jeopardy! uses a three-act structure. The first two acts, Jeopardy and Double Jeopardy, feature fast-paced, blow-by-blow combat as all three contestants vie to earn the most money. But unless one of them can secure an overwhelming advantage, the show comes down to one question. A player with a near-commanding lead can be felled on one tough question and a lucky guess from an opponent. Or, even worse, many a player who has demonstrated a firm grasp of European geography, Oscar-winning movies and the works of William Shakespeare has been betrayed by their failure at simple arithmetic. That’s two life lessons for you: Life is unfair, and always check your math.

Over the years I’ve really come to appreciate the unchanging presence of Alex Trebek. After watching him for thousands of episodes, I know what he’s going to say before he says it. When all three contestants ring in with a wrong answer, he’ll say “no harm, no foul,” even though it isn’t mathematically true. When a woman does well in a sports category, especially football, his “good for you” will be so patronizing you’ll think you’ve time-traveled back to the 1970s. The relish with which he will over-pronounce French words and phrases will delight you, and the cluck of disappointment he’ll unleash when contestants stare meekly at a clue about his native Canada will strike fear into your heart. And when, at the end of the episode, he says, “We’ll be back tomorrow. I hope you’ll join us,” you know that you will.

After the show is over, my engagement with the program is just getting started. Once the Final Jeopardy responses and wagers are revealed and a champion is crowned, I can head over to Twitter to see what people are saying at #jeopardy. On a good day, only half of the tweets will be about how attractive or unattractive the female players are. Occasionally the players themselves will live-tweet the broadcast of their episodes, providing insight into the moments when they froze up or how they were able to pull that Daily Double response seemingly out of thin air. Following Jeopardy! contestants for their behind-the-scenes stories and then quickly unfollowing them when they go back to tweeting about normal life is now a common pattern for me.

I can also check out r/Jeopardy on Reddit, or head to the show’s official site to play a game involving the unused sixth clue for each category on that’s day episode. Over at The Final Wager website, 2003 College Championship winner Keith Williams posts a daily video analyzing the contestants’ wagers and showing the amount they should have bet to optimize their chances. And if I still haven’t exhausted my need to nerd out on trivia, jboard.tv is a message board where superfans intensely analyze each episode and, in the case of unusual occurrences, can pinpoint every time the same thing has happened in the show’s 32 seasons.

These sites have had some impact on the show itself. Many contestants have admitted using them as a resource for wagering strategy and gameplay. Amateur analysts tend to favor players who bounce between categories, hunt for Daily Doubles to keep them away from their opponents and wager aggressively when they find the doubles in order to secure a runaway lead going into Final Jeopardy. Such recent big winners as Arthur Chu, Matt Jackson and Alex Jacob have utilized these strategies to win hundreds of thousands of dollars, though there are still many successful players, including Julia Collins, who simply start at the top of a category and work their way down.

Another resource for fans and prospective contestants is j-archive.com, a site that features thousands of complete games full of clues to practice with. Any longtime watcher can tell you that the show frequently re-uses the same material. If you’re watching the show and the clue is looking for a Scottish poet, a Russian empress, a Danish philosopher or a Finnish composer, you can be 100 percent confident in answering Robbie Burns, Catherine the Great, Soren Kierkegaard or Jean Sibelius. Seriously, if the show ever has Finnish Composers as a category, the answer will be Jean Sibelius five times in a row.

Of course, getting on the show is the principal aim for any Jeopardy! superfan, and I’m no exception. I’ve been trying for years, dutifully signing up for and taking the online test for adults each January. Twice I’ve made it to the next stage in the process, an in-person audition featuring a 50-question test, a practice game against other prospective contestants and an interview so the producers can gauge how you’ll come across on TV. Sadly, that is where my experience ends, as I’ve yet to receive the phone call inviting me to Los Angeles.

If the phone ever does ring, I’ll know that I’m prepared. I’ve been training for this my whole life. I’ll take Finnish Composers for $200, Alex.

John Everett is a paralegal who lives in Jersey City, New Jersey.