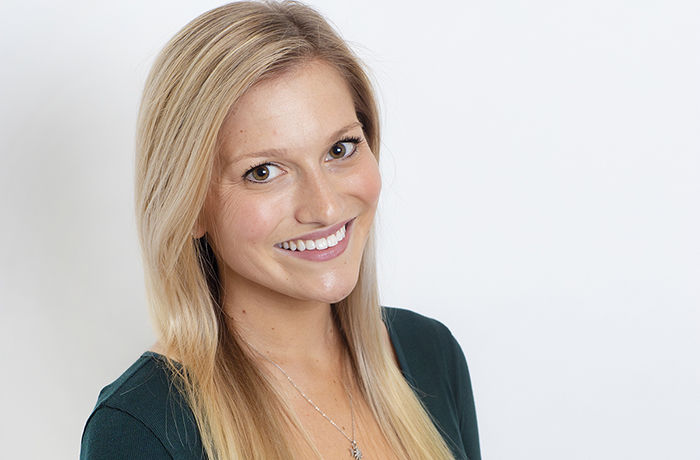 A few months before the 2019 World Cup, Sports Illustrated producer and podcaster Jessica Smetana ’16 was brainstorming how she was going to spend the two hours she had with U.S. women’s national team player Julie Ertz.

As the showrunner for SI TV’s The Wilder Project, hosted by her colleague and friend, Charlotte Wilder, Smetana wanted to showcase the soccer star during her appearance without doing anything physical — couldn’t risk Ertz getting injured — or resorting to a typical sit-down interview. “Too boring,” Smetana says.

After some deliberation, they opted to visit an artisanal cheese shop in Chicago for a World Cup-themed taste test. France vs. USA: Cheese Edition. “It was such a fun day,” Smetana says.

For Smetana, who also co-hosts the Most Valuable Podcast, those kinds of days aren’t so rare. Her projects have included an in-depth ranking of the six-and-a-half Lids stores in the Mall of America and, this September, a feature on Notre Dame’s leprechaun corps.

“This is the original ‘backyard’ race . . . and the format is to create maximum torture for the runners.”

Most recently, she traveled to Nashville to cover Big Dog’s Backyard Ultra marathon. I asked Smetana about that experience as part of a Q&A that will appear in the magazine’s winter issue. In the full interview, Smetana talks about her work, the recent round of layoffs at Sports Illustrated and life as a fan of both Notre Dame and Clemson (where she spent her freshman year).

In the meantime, here’s her take on Big Dog’s Backyard Ultra:

Jessica Smetana: So, this is the original “backyard” race. And this guy, his name is Gary Cantrell, but his alias is Lazarus Lake — like, he made up an alias for himself — he puts on multiple ultra marathons each year, and this one is in his actual backyard, and the format is to create maximum torture for the runners. The runners get an hour to run a four-mile loop and they have to finish the loop within an hour. So, if you run a really fast loop, you get 20 minutes of rest. If you run a slower loop, you get three minutes of rest. It goes on until the last runner standing basically. It looked terrible. The woman who won this year, Maggie [Guterl], ran 250 miles and didn’t sleep for two nights. It’s a really fascinating race format. . . . You can be the fastest person in the world but it doesn’t really matter because you need to have endurance, and you need to be mentally tough enough to keep running. So, basically, age and gender don’t matter at all. The second to last person to go out was [Will Hayward], a 51-year-old man from Hong Kong, and Maggie is a 39-year-old woman from Colorado. And there was a 59-year-old woman who lasted 24 hours, and there were 29-year-old people that were out before the 59-year-old people, it was really insane. It was really intense and fun to cover, and very different from what I’m used to. It’s so interesting to see — like if you saw these people in street clothes, they’re not 6-foot-6, 300-pound Zion Williamson, but they’re just as athletic. It’s just a different type of athleticism.

Rachel O’Grady is a marketing analyst currently based in Atlanta.