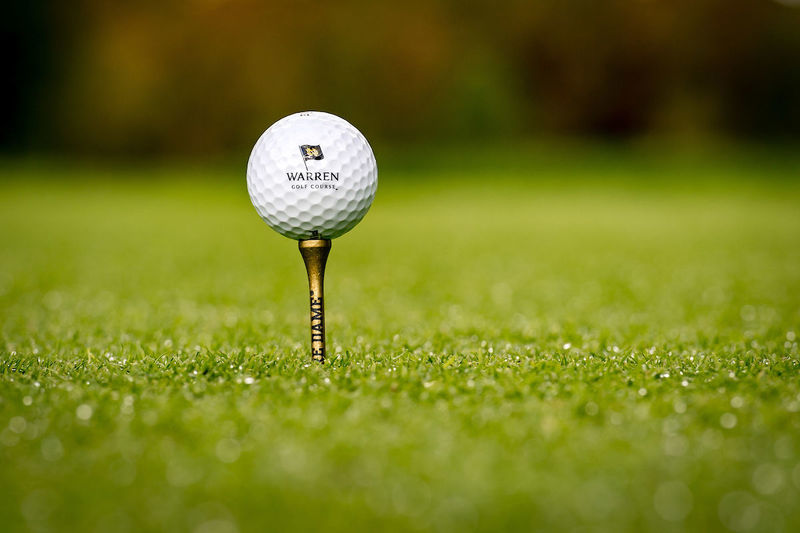 From the path along the No. 7 fairway at Warren Golf Course, I had a clear view of the Dome, the Hesburgh Library and Flanner and Grace halls.

I had no view whatsoever of where Dennis Wells’ tee shot had stopped.

His ball, a Titlelist Pro V1, had taken off strong, straight and pure from the tee box, a launch most golfers like me will never experience in our lifetimes. But the angle was off. When the ball bounded on the fairway, life’s unfairness took hold and the ball pitched into the rough.

Rough is an understatement. At Warren, it is a wiry mess, a scalp of swirling quills, as if Satan himself had slept late and defiantly refused to comb his hair.

Ouch. Did I really just write that?

Four shots later, Wells had a bogey 5, and it was going to get a lot worse. Already three over par for the day when he started No. 7, he bogeyed again at 9 and added five more strokes to par over his final nine holes.

That’s how his moment in the sun at the USGA Senior Open Championship ended.  He carded 10-over par for the day, 13-over for the two days and missed the cut.

Just 60 golfers posted scores low enough to qualify for the final two rounds of the Senior Open, which was played June 27-30 at the Warren course at Notre Dame. The champion of the age-50-and-up tournament was Steve Stricker, whose four-day total of 19-under par was six strokes better than runners-up Jerry Kelly and David Toms.

Wells, a teaching pro from Cincinnati, was one of the 154 total players competing. Some — Tom Watson, Vijay Singh, Bernhard Langer, Colin Montgomerie — brought household names and previous big-time paydays. But about half (including Wells) are not regular Senior Tour competitors, and had to earn a spot in the field through regional qualifying tournaments. That’s why it’s called an Open. If you meet certain criteria, you’re eligible to chase the dream.

Despite the celebrity players, though, the real star of every major tournament is the golf course itself. The USGA chooses a different place for its Senior Open each year. Last year it was Colorado Springs; this year it was Warren; in 2020 it will be in Newport, Rhode Island.

Warren doesn’t have the standing of Pebble Beach, Augusta or Pinehurst No. 2 yet, but nationally televised tournaments like the Senior Open are a step in that direction.

I volunteered four afternoons at the tournament, shuttling players in golf carts from the practice green to the driving range. The golfers who spoke of it, without exception, were complimentary of Warren.

Despite weeks of torrential rains and two tornado warnings after practice began, the playing surfaces provided a fair test of that odd mix of power and delicacy that determines who will have the little scores and the big paychecks.

Hosting the Open is a huge honor for a course like Notre Dame’s. And ever since the USGA announced the course’s selection in 2016, hundreds of hours of work were required to re-sculpt the fairways and create new challenges for the senior elites.

My role in this was minuscule, as one of some 2,200 volunteers. Others I met took time off work in places like Orlando and Dallas, flew into town and stayed at Airbnbs for the honor of serving as shuttle drivers, hole marshals, scorekeepers and garbage haulers at the event. I made the one-mile journey on my bike.

We didn’t get paid for any of this. In fact, we shelled out $135 apiece, getting a hat and two shirts for our troubles. I’ve volunteered several times at another golf tournament, the Four Winds Invitational at South Bend’s Blackthorn Golf Club, and I’ve always received a free round of golf afterwards. Not so at Warren. (I won’t lie — there was some grumbling about that.)

Though working a major tourney like the Open has its advantages — I’ve never told a Blackthorn colleague, “Jack Nicklaus just gave me a friendly wave” — I recommend volunteering at smaller tournaments, if you have time. Minor-league events mean more challenging assignments, the kinds that get you inside the ropes and make you feel part of a team.

I’ve been a volunteer caddy at Four Winds on several occasions, and I’ve found that blessedly little is expected of these non-professional positions. Typically, you show up, keep up and shut up. Rake the traps, clean the clubs, keep the player comfortable. Don’t offer advice.

Once, my player was wobbling between a 5-iron and a 4-iron on one of Blackthorn’s par 3s and casually asked what I would hit there. I replied, “Double bogey,” and she wisely decided for herself.

If you can’t volunteer, attending a tournament can be just as fun. On Friday, the off-day of my volunteering schedule for the Senior Open, that’s exactly what I did.

My friends were watching Tony Soerries, an alum of South Bend’s Clay High School who had qualified as an amateur player. But I was watching Wells.

When the list of 154 was announced, I had gone on a quest to find a certain type of new hero. Wells fit the bill.

For 16 years, he had been a master PGA professional at the Little Miami Golf Center, a nine-hole facility on the east side of Cincinnati. He’d made a little money playing in tournaments throughout southern Ohio, and a news release from Xavier University, where he served as an assistant women’s golf coach, referred to him as one of the Cincinnati area’s top golfers.

But what sold me on Wells was a quote from the Times-News in Kingsport, Tenn., where he grew up. In a six-paragraph news item on his qualifying bid, he told the paper,

“It has always been a career goal to compete against the best players in the world at least once in my life, and now I will get the chance. My family could hardly believe it when I pulled up the list of players in the field from the USGA website and saw that my name was listed right after Tom Watson, my boyhood idol.”

I was doing shuttle runs during Thursday’s opening round, so I was unable to watch when Wells scored a three-over-par 73. The projected cut line was plus-two after two rounds, so his mission Friday was to play one-under or better to qualify for the final two days.

But on that sweltering Friday, I saw his drives land a bit short and his putts swerve inches right or left. He ended up with fives when he needed fours or threes. It was, as they say, a tough day on the golf course. I left the small gallery after nine holes so I wouldn’t be late for dinner.

Because my world is small and forever interesting, I was making my last shuttle run Saturday when a man and his teenage son climbed into my cart. He wasn’t a contender that day. He was just Dennis Wells.

I introduced myself and told him I had followed his group for nine holes on Friday. I told him I was happy to meet him, in part because of that quote he had given a writer about being right behind Tom Watson.

He laughed and asked me how on earth I had found that quote. It was getting a bit too close — probably a bit creepy for him, I think.

Dumb luck, I lied. I asked him how many other times he had been close to qualifying for a big-time tournament. He said he had just turned 55 and had been trying to get into other PGA events, senior and regular, for quite a while. This was it.

“My drives,” he said, and his voice trailed off. He likely was replaying all 18 tee shots from that second round in his head.

My game has been writing. I knew I would write about this man, and I was thinking about how many of my words have ended up like drives into scalps of swirling quills, when a 7-iron and wedge would have sufficed.

With his son behind us, we rode our last few yards quietly, nodding and thinking about who we are and how we got there.