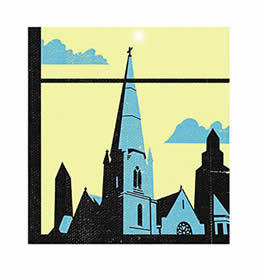 “Of all hostilities,” Dorothy Day once wrote, “one of the saddest is the war between clergy and laity.” This was in her newspaper column during the summer of 1964 as some controversy, long since forgotten, roiled the Catholic Church in America.

As a founder of the pacifist, anarchist and activist Catholic Worker movement, Dorothy Day was no stranger to controversy. Although she never hesitated to describe herself as “a daughter of the Church,” she occasionally found herself in vigorous public disagreement with such hierarchs as New York’s archbishop, Cardinal Francis Spellman. But even amid the most fiery of those disagreements — including Spellman’s enthusiastic support for the war in Vietnam — she kept in mind and wrote about Jesus’ rebuke to his disciples when they suggested a sort of divine drone missile strike on some inhospitable Samaritans: “You do not know of what spirit you are” (Luke 9:55).

True, a war in Southeast Asia was raging, she wrote then, “but as for the hostilities in our midst, the note of violence and conflict in all our dealings with others — everyone seems to contribute to it. There is no room for righteous wrath today.”

The plainspoken, outspoken and occasionally law-breaking Dorothy Day may even have indulged in righteous wrath a time or two herself, but it scared the hell out of her.

I wonder what she would have to say about the controversies swirling within and around the Church today. Even a cursory tour of airwaves, web and blogosphere reveal a perfect storm of righteous wrath brewing. Its inflowing currents have included the endlessly festering clergy sexual abuse scandal, the Health and Human Services mandates, the Vatican’s takeover of the Leadership Conference of Women Religious, the president’s endorsement of same-sex marriage, the U.S. bishops’ investigation of the Girl Scouts and the fact that (insert here the controversialist of your choice) has been invited to speak at a Catholic institution of higher learning.

And from time to time it may be unavoidable to take “a side” in such disputes. Faith is not some private hobby after all. It is an election year; the 2013 Girl Scouts’ cookie drive likely will be under way as the bishops deliberate and proclaim; commencements happen yearly.

Those lacerating hostilities in our midst that Dorothy Day noticed half a century ago are back in full force, too, and now, as then, “everyone seems to contribute to it.” Even at weekday Mass here at Notre Dame, an occasional public prayer may be heard from the pews that seems directed less to God than to the rest of us and which includes more than a hint of partisan slant, as if Our Lord is being encouraged to twist a few arms. We all seem to contribute to it.

But those of us, like me, who don’t mind finding fault with the leaders of church, state and opinion, ought to remember that the need to be right can become idolatrous, that the savor of high dudgeon can become every bit as poisonous as any heresy arousing it, and that, well, we do not know of what spirit we are. This summer of the year of Our Lord 2012 is a good time to be reminded of that.

Dorothy Day, pray for us.

Michael Garvey is Notre Dame’s assistant director of public relations. Email him at garvey.2@nd.edu. A longer version of this essay was published as an alumni blog at the magazine’s website.