Religious liberty advocates may yet win their legal fight to block controversial federal rules that will soon require most employers to provide insurance coverage for birth control, but Bill McGurn ’80 worries that such victories may further undermine religion’s constitutionally protected place in American public life.

“Even with the Constitution firmly on our side, even if we are upheld in the courts, religious liberty will become increasingly fragile because the understandings about human nature and the role of religion upon which they rest are no longer ascendant in the institutions that forge and shape public opinion,” the journalist told a packed Patrick F. McCartan Courtroom in Notre Dame’s Eck Hall of Law on September 19. 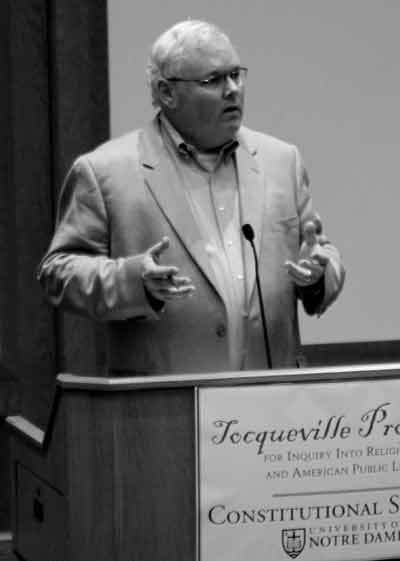 The alumnus, who studied philosophy as a Notre Dame undergraduate, praised the University’s “principled stand” in suing U.S. Health and Human Services Secretary Kathleen Sebelius in May 2012. That lawsuit was dismissed the following December on procedural issues.

The symposium was timely. Hours before McGurn’s address, the Obama administration asked the Supreme Court to review a lower court’s June 2013 ruling that for-profit companies — in this case Oklahoma City-based Hobby Lobby Inc. — could refuse to comply with federal regulations on religious grounds.

McGurn, a George W. Bush chief speechwriter and Wall Street Journal editorial writer who now serves as editorial page editor for the New York Post, said “any number of reasons” might explain religion’s precarious place in the public square, but he focused on the consequences of the sexual revolution.

“Whatever the old assumptions about human nature and limited government, the sexual revolution has ripped them up at the root,” he said. “And we see what has replaced it in [U.S. Supreme Court Justice] Anthony Kennedy’s passage in Planned Parenthood v. Casey: ‘At the heart of liberty,’ wrote Kennedy, ‘is the right to define one’s own concept of existence, of meaning, of the universe, and of the mystery of human life.’

“How far that is from the idea that at the heart of liberty are ‘self-evident truths’; that there exist ‘laws of nature and of nature’s God’ we do well not to defy; and that the most precious and unalienable rights we have come from our Creator,” McGurn continued. “Yet how apropos the Kennedy formulation is for our day . . . when churches supporting moms and dads trying to raise their children with traditional notions about human sexuality are thought to be spreading hate.”

The answer for advocates of religion’s free exercise, McGurn said, is to “restore the lost language of liberty.”

“We have to get back to the idea that there is truth, and that it is the path to love.” That, he later added, is a job for the Church.

The symposium was co-sponsored by Notre Dame’s Tocqueville Program on Religion and Public Life and the Potenziani Program in Constitutional Studies, both directed by Vincent Phillip Munoz, an associate professor of political science, and by the Napa Institute, an independent, California-based organization promoting the Catholic intellectual tradition.