The dark clouds that dumped buckets of rain all night cleared off just as the sun peeked over the horizon. The parking lots around Notre Dame Stadium were still, apart from the chirping of crickets in the grass, and the hushed conversations of a few attendants in reflective green vests, who stood around waiting for the masses to arrive.

At 7 a.m., a loud and familiar noise broke the predawn silence: the clanging of ice hitting a cooler full of bottles.

The proposition was fairly straightforward: get to Notre Dame at dawn, wait for the first (and presumably most rabid/enthusiastic) tailgaters to show up, make quick friends and document whatever happened next.

But dozens of cars already sat on the lot when I got there at sunrise.

“It’s always like this,” remarked one of the vested attendants. “And [we’ll] be back at six [a.m.] next weekend, too.”

He couldn’t say when some of the tailgaters had arrived. “Them six right there,” he said, pointing to a row of cars a football toss from Legends, “they were all here before I got here.” 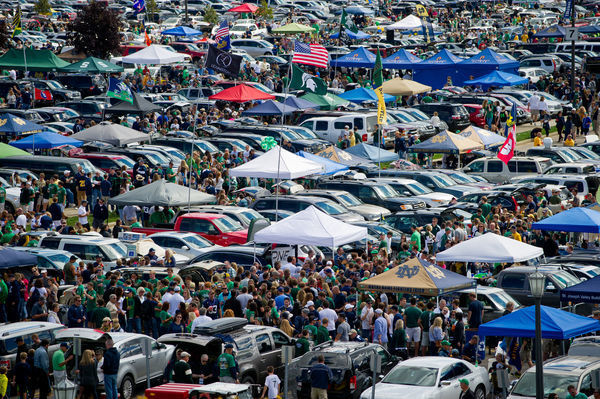 As 7 a.m. passed, people who had been sleeping in their cars stirred to life. Like a caravan of gypsies, they began setting up the tent city that would cover the parking lots before long. They blew up inflatables, jump-started generators and plugged in professional-grade audio systems and satellite TVs. Men grunted as they hoisted metal flag poles all across the lots, like a hundred Iwo Jimas.

Some of these were family parties, while others appeared to be corporate-sponsored. That same attendant said companies send people out in the night to claim premium spots for their tailgates.

“A lotta games get played out here,” he said, looking over his glasses as he spoke.

Some parties started right away, but for the most part, the scene was pretty tame. The parking lots wouldn’t fill up until much later in the morning — people speculated that the predictions of heavy thunderstorms all day had kept fans away. But the rain held off, and it was even sunny for the last few hours before the game, by which point the sea of tents stretched out in every direction.

Although no one seems to know where it came from, the Internet generally pinpoints the first modern tailgate during the Civil War. Congressmen and members of the Northern elite packed picnic lunches and showed up to watch the First Battle of Bull Run, expecting an exciting Union victory. To everyone’s surprise the battle ended in a major upset, and in their rush back north, the spectators caused a traffic jam to rival 933 on a Saturday night.

Some people trace tailgating’s roots back even further, as far back as the Roman Empire. In 2012, a study concluded that in many ways, tailgates resemble ancient harvest festivals. The study was conducted by a Notre Dame professor, in case you had doubts about how deep the tradition runs here.

For a school that values tradition so much, though, big changes are on the way, in the form of a wave of construction. The library lot has already been transformed dramatically, with a considerable portion of the parking spaces converted into a giant pit in preparation for a new building. And as many people know after last week’s announcement, at the end of this season, Crossroads is coming.

Alternately praised as forward-thinking and criticized as decadent, the Campus Crossroads project is going to transform Notre Dame Stadium forever. The $400 million expansion will eat up some of the current stadium parking, and fans on Saturday had mixed reactions. Some people lamented how much it would alter one of college football’s most iconic venues; others thought it would be a cool addition.

Just before 11 a.m., I heard from a 2011 alumnus who seems to make it back for more games than he misses. He was tailgating in the stadium lot, and when I arrived, he promptly offered a beer.

“Yeah, all right,” I said, pulling a Coors Light from the cooler. Standing around with him and some of his friends, we caught up and told old stories.

I finished the can, and he said, “Hey, grab another!” Over the next hour, more friends trickled over, more beers were had. We talked and laughed until after noon, when journalistic duty obligated me to keep exploring.

It would probably be doing the reader a disservice if I didn’t admit that for the next few hours, there was a fairly substantial gap in my notes. But as a four-year band member and a 2014 grad, this was my first chance to tailgate, and I wanted the full experience.

I’ll also admit that I’d been skeptical of the idea of partying all day in a dirty parking lot, but as I wandered around south of the stadium, the appeal was obvious. Smoke poured out of stainless steel grills, and the smell of barbecued meat filled the air. People yelled and laughed over the subwoofers thumping out Top 40 hits. I could hardly believe the intricate appetizer spreads people had prepared, or the full bars stocked with top-shelf liquor.

Making my way through the parking lot, I couldn’t seem to walk more than 20 yards without being offered something to drink or running into someone I knew. The whole thing started feeling like a super-sized family reunion. And I guess we were family, right? All here to love and celebrate old Notre Dame, this school that had brought us together in the first place.

By 2 p.m., the stadium lot was jammed full of people. Students roamed between parties in packs, with Solo cups in hand. I carefully navigated through them to find the tailgates I had seen there at dawn.

One belonged to Eric, a local pizza deliveryman trying to make it as a rock musician. He said that to claim the spot, he’d parked a car next to Legends the day before, and then swapped it out in the middle of the night with an SUV loaded with supplies — food, a tent, a cornhole set and bottles of Captain Morgan, Bacardi and Wild Turkey. He’s been doing this every weekend for six years, with or without tickets. And even without a direct connection to the school, this pregame ritual has been a tradition in his family for years.

About 100 yards away was a tailgate that fired up just after 7 a.m., under a tent decorated with custom-made “Irish Mafia” banners. Its owner was Jeremy, a big bearded guy with “Irish” tattooed on his left arm.

“I probably spent $400 on food and everything,” he said, which included brats, steaks and 22 pounds of pulled pork he’d been preparing since Thursday.

An Indiana native, Jeremy became a fan as a kid, eventually converting his entire family to Notre Dame. He hoped to make it up a few more times to continue his eighth year of tailgating, despite having recently been laid off.

Kickoff drew near, and the tents disappeared into their cars. As the families headed to the stadium, the parking lot started feeling wilder.

There was trash strewn across the ground, smashed glass on the pavement, and beer cans everywhere — overflowing from trash cans, in the grass, even in that mysterious blue sludge of the porta-potties. Four people standing under a tree passed around a handle of Fireball whiskey, competing to see who could chug from it the longest.

Next to them, some men packed up the remains of what I remember being one of the rowdier tailgates from the day. They loaded their grills and emptied their coolers, stepping carefully around something on the ground. When I got closer, I could see that it was a pig head.

Its skin was taut over its face from hours on the fire, and it grinned devilishly from where it lay in a puddle of beer on the asphalt. A few skinny young boys stood looking at it. One nudged it with his foot, and a piece of something fell out of its gaping neck cavity. The scene was quickly getting too Lord of the Flies, and I had to walk away.

In the distance, the drums thundered and the crowd roared as the Irish ran out onto the field.

The next afternoon, the parking lots were empty again. A dozen seagulls prowled around looking for scraps, but they were too late. The trash was thrown away, the tents were packed up, the cars were gone; the carnival had pulled out of town, until the next week.

Mike Vangel is a 2014 graduate living and writing in South Bend. He freelances and maintains a blog of nonfiction storytelling at moosedribble.com. E-mail him at mvangel@nd.edu.