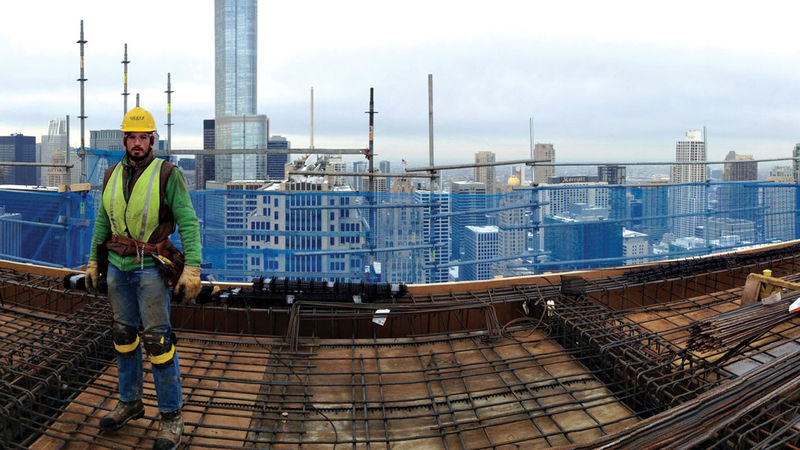 I arrived on the construction site as a Chicago Local 134 Union electrician on September 23, 2013; I had learned the basics of electrical work during three-months of apprenticeship classes last summer. But upon arriving at the unfinished 50-story building, I felt like I had landed in a foreign country.

My life since graduation has been something of an adventure. I worked on a cattle ranch in Wyoming, taught English in China and returned to South Bend to work for a solar power company. There I discovered my passion — renewable energy — and learned that solar power is essentially electrical work. So I moved to Chicago and became a union electrician and to better understand the other half of the solar-electric equation. Working in construction outside all winter, I have learned a lot about electrical work and about myself.

I had been placed with Gurtz Electric, a big shop with about 250 electricians, and was put on what the industry calls a “deck job.” The Deck is whatever floor is currently the top of the building. People talk about The Deck in the same way they refer to hell or the gallows. It ends up being a euphemism for what is understood to be the hardest, coldest and most thankless job on the site. Depending on what you want out of the trade, The Deck is either the first or the last place you’d like to find yourself. Consider me part of the former.

The high-rise we have been building is at 455 North Park Drive, planted right in between Trump Tower and Navy Pier. When you look east you see the sunrise over a frozen Lake Michigan; it’s a truly alien landscape. When you look west, you simultaneously see the Sears (Willis) Tower, Trump Tower and the John Hancock Building; one of the best views of the Chicago skyline. It is amazing — despite the beautiful view — how rarely you stop for a moment and take it all in. Your eyes spend most of the time on the floor beneath your feet, since you can’t take more than a step in any direction without encountering myriad obstacles, mostly consisting of crisscrossed steel bars.

When you work construction, you do not feel part of the city despite being geographically present to it. You walk from your car in the morning with a lunch box or thermos, indicating that your job sets you apart from other city commuters. Like children view their grade school teacher, it is assumed that you do not exist outside of work.

Every morning 20 to 30 tradesmen shuffle into what is endearingly called “The Skip.” The Skip is the elevator built on the outside of a building during the construction phase. It is exactly the sort of caged apparatus you see in movies taking miners into the depths of a mine. In our case, The Skip rattles upward toward The Deck with the reluctance of an old carnival ride.

The Deck has no ceiling, no obstruction between you and the wide open sky. It feels as if you are working on a bustling, aerial pirate ship, surrounded by perpetual activity while a crane flies materials in from overhead. Noise, always noise, an electric saw buzzing through pipe, a jackhammer pneumatically pummeling concrete, the rhythmic beating of the cement pump’s iron heart.

The Deck is wild, at times primitive; something tribal exists between the men who work on The Deck no matter what trade they are from. There is no rite of initiation except time spent “up top.” During torrential downpours without cover, I think of Thor Heyerdahl on Kon-Tiki. When we are surrounded by thick fog and can’t see anything but clouds, I feel Hiram Bingham’s awe at Machu Picchu. Days that we endure snowstorms, I join Sir Edmund Hillary on the summit of Everest and remember, “It is not the mountain we conquer, but ourselves.”

Then there are clear days when the sun makes everything bright and crisp. On those days I am vividly myself, building the top floor of a high-rise in downtown Chicago. It’s at these times my heroes’ journeys and the accomplishments of others fade away from comparison as I discover my own path, sometimes in sweeping narratives but more often one day at a time.

Bill Ehrlich, who grew up in Woodbury, Minnesota, was a finance major at Notre Dame.