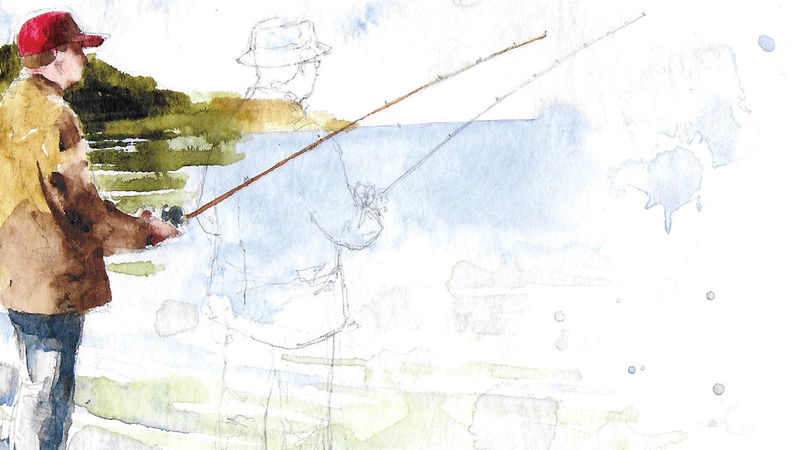 As a fisherman, there comes a time in your life when you will go fishing without the one who taught you how to fish. A time when you can never fish with him again.

If you are lucky, you will go with your brother — who actually learned to fish properly — who can help you remember how to fish passably for yourself.

There will be a drive of some distance to a favorite place to fish with the one who taught you how to fish. You will reminisce about prior drives to this place — this river, lake, bay or shore. You will drive by the place where you always stopped to eat, and you will remember — almost taste — the crisp bacon, the patty melt, the rhubarb pie, the root beer float, the things you always ate together. You will stop to refill at the gas station with the best prices. You will buy a day-pass fishing license at the best place to buy tackle. Through the low cloud of cigarette smoke, you will marvel that the proprietor lives on in apparent health, while the one who taught you how to fish goes fishing no more.

You will recall prior conversations on that drive: what to look for in a good car, what to study when you go to college, how to dress properly for a specific occasion, why it is important to be more respectful of your mother, who to vote for in the upcoming election, what it is like to be married, when you know you can retire, what your grandparents were like as parents, why work is important and gives life meaning, how to keep perspective, how to keep hope.

You will start talking to yourself.

You will remember being taught how to cast. You started with the push-button release on your reel. You were on a dock and wore a life jacket and had no range of motion. You dropped the line behind yourself on the winding delivery of your first backcast. The next time, you slammed the lure, and even the tip of the rod, into the green water. The one who taught you how to fish laughed, then came and held your arm through the routine, calling, “Now!” when you were to release the button of the reel. The lure raced from the rod tip, pulling out the line, arching through the air and throwing off concentric circles from the spot in the water where it landed.

You will remember hunting for bait, both with the one who taught you how to fish and with the others he taught how to fish. You found worms after the rain, minnows in a bucket baited with bread, frogs using flashlights under the glow of the moon. 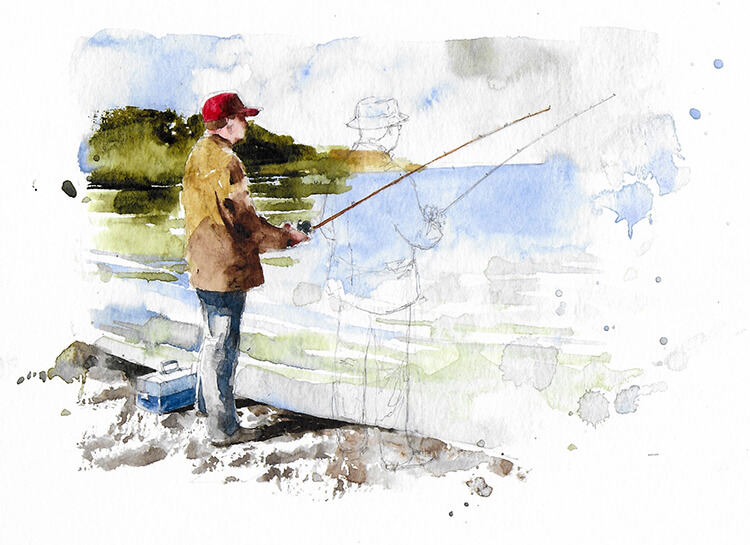 You will remember meeting the other people who fished with the one who taught you how to fish. The old one who kept them all, the one who smoked the pipe, the one who never talked, the veteran, the Cajun, the surgeon, the second cousin with the glass eye, the one who despised northern pike.

You may look at the gear in the back seat and recall the hours the one who taught you how to fish spent studying, acquiring, preparing and maintaining the equipment. You will recall going to the sporting goods store with him for hours, and at all hours. Together, you were looking for chartreuse-shaded worm tails, minnow-finish rattling raps, a crawler harness, pheasant feathers for a fly pattern, a hook sharpener and fishing lines marketed to withstand the weight of a trophy fish of every species for which you might ever fish.

In one moment, you will remember being made to practice casting your line the way the neighbor boy was made to practice the piano. He had the good fortune of hitting his sour notes inside, where only his mother could hear him. In contrast, you had the misfortune of launching one errant cast after another at the open mouth of a paint bucket in your front yard — across the street from the home of Kelly Engstadt, the cutest girl in the neighborhood. You will smirk when you recall how, after witnessing the spectacle, she told everyone at school you were “mental.”

In the next moment, you will remember the look of pride on the face of the one who taught you how to fish when, years later, he watched you throw a crawdad-finished spoon within six inches of a boil of brackish water on a shallow Louisiana estuary, enticing a redfish to tighten your line.

Before you know it, the interstate will give way to the freeway, then the county road, then the turnoff into the farm fields, the dirt roads. You will remember the times you saw a pheasant, an eagle, the sandhill cranes, the herd of does, the lone buck. You will remember the time you bet the one who taught you how to fish that you could outrun a bear and how, five minutes later, a bear outpaced the car as it crossed the road, leaving you with no choice but to wordlessly pull a five-dollar bill from your wallet and set it on the dashboard.

The anticipation of fishing will begin to grow. You will remember the different species of fish you caught with the one who taught you how to fish. How you first caught panfish in the shallows of the lakeshore, later walleye and bass from a boat, and still later how you hunted northern pike and muskies together. You will remember the specifics of the ways he taught you to fish for the fish you were intent on catching.

What gear to use, how to lure them, how to play them once hooked, how to handle, unhook, measure, judge and keep or release the fish you caught.

At last, your line will tighten, and it will not be just a snag, a rock or a weed, but rather a vibrantly marked and lively bass. It will dart and plunge, and when your line pulls it, it will jump in the air, presenting its lined and spotted side as the water droplets shine in the sun. As it plays on your line, living out the drama that drew you to the water all those years, you will not think of the past or the future, but only of the now of that moment. The conscious mind will give way to the subconscious instincts acquired over those many, many days of fishing together. Your mind will finally have its moment of peace from anxiety, sadness, self-evaluation or anger.

Later, as the sun moves low toward the trees behind you, you will begin to walk downstream with your brother. Together, you’ll lob a few last casts as you walk, lingering in the moment. As you clear the muck of the riverbed from your wader boots, you’ll swat a few mosquitoes and curl down onto a stump, a fallen tree, a polished rock, and take a seat.

Here you will have stashed extra gear and some food, as the one who taught you how to fish had taught you to do. You will open the knapsack, pull out cold-cut sandwiches and crack two beers, toasting the one who taught you how to fish. “What a day,” your brother will say. “Yeah,” you’ll reply. Back and forth you will mumble a few other things that seem appropriate to say. You probably won’t make eye contact. You probably won’t taste the sandwich or the beer. You probably will get even quieter as the sun sinks lower, darkening as it filters through the branches.

Once again, you will think of the one who taught you how to fish.

You will remember how, during the wake, as a marathon-length mourning line came to pay respects, there was a line you used, like a crutch, to limp your way through. “We’re not sorrowful we’ve lost him, we’re grateful for all the time we had with him.” It seemed like a smart thing to say. The half-truth made it easier for you and for his friend, colleague, old roommate, cousin, fishing buddy, or whomever else to fumble through the formalities.

As the long silence grows awkward at the river, you will say to your brother, “I’m glad to be here, it’s great to go fishing again.” A new line serving the same purpose: to fill the void of unspeakable hurt with something familiar, audible, tangible.

Then, a slender heron in the shallows will stalk and strike out at a baitfish. In the beauty of that movement, you will recall the joy of watching the one who taught you how to fish elegantly cast his line — a lasso of line nearly an eighth of a mile long, curling artfully through the air toward its target.

With that remembrance, you will come to believe what you just said, that it is still good to go to those special places and to do those special things, because it is there that you will feel so close to that soul who now seems so distant. In no other place and in no other memory is he as close as he is there, casting toward you from the opposite shore.

Brian Hobbins and his family live in Minneapolis. His father, Robert Hobbins, taught him to love God, writing, fishing and Notre Dame.