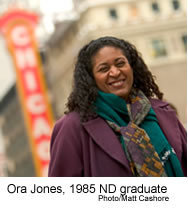 The queen. The caretaker. The police officer. The judge.

If she’s a figure of authority, chances are Ora Jones has played her on stage. The actor’s presence is so commanding that she’s often assigned roles historically filled by men—like the Stage Manager in Thornton Wilder’s Our Town, an American classic given an acclaimed staging last fall at the new Writers’ Theatre in Glencoe, Illinois. But Jones, a 1985 Notre Dame graduate, can’t see it. “I asked a friend once, ‘How come I always get these roles?’ And she said, ‘Because you always sound like you know what you’re talking about.’ And I said, ‘I don’t know what I’m talking about half the time!’” Jones laughs. “I’m this woman who can barely run her own life.” Maybe she exaggerates. She works almost continually in the top tier of the Chicago theater scene—at the Goodman Theatre (Proof, Boy Gets Girl, The Beard of Avon_), Court Theatre (The Misanthrope_), Steppenwolf Theatre Company (The Violet Hour) and with such smaller troupes as Rivendell Theatre Ensemble, which featured Jones in its recent production of Knowing Cairo. And she has one of the best actor’s day jobs in the city, performing educational programs at the Art Institute. It’s not a bad career for someone who blew her first audition. “I was 7 or 8 years old, and I had made it clear that I was going to be an actor,” recalls Jones, whose military family was living in Panama at the time. “The show was Oliver!, and I had to sing a couple of lines from ‘Where Is Love?’ Well, I didn’t know it. It was terrible. I just wanted to go home. I think more parents should take their kids to auditions, if they say they want to be actors. That would cure it.” Her own cure seemed to hold until she got to Notre Dame. Jones says she wanted a broad university education, not conservatory coddling, and to play piccolo in the Fighting Irish marching band. But the theater faculty kept pulling her on stage. “She was very reticent,” recalls professor emeritus Reginald Bain, who saw Jones as Sally Bowles in Cabaret when she was just a freshman. “Boy, did she light up the stage. . . . But she was very shy about going into theater.” That shyness still grips Jones at times, even after two decades in the profession and despite her outward appearance of utter self-possession. Her portrayal of the seductive Jessie Brewster in Richard Greenberg’s The Violet Hour thrust her into dramatic territory she’d mostly avoided over all those years playing cops, counselors and other character parts: namely, a hot and heavy makeout scene. At one production meeting, costume designer Mara Blumenfeld puzzled over the problem of Jones’ dress: It had to be true to the play’s 1919 period, but it also had to accommodate some serious petting by Jones’ co-star, Josh Hamilton. “They were talking about making the skirt so that his hand could get up underneath it, and I thought, ‘I have never had that conversation before! Holy crap!’” Jones then turns serious: “That’s where you really have to trust the people you’re working with.” Her trust in Hamilton was absolute. “He made it so easy for me to just fly off the handle,” she says. “I felt so completely safe.”

Jones also developed special relationships with the Our Town company—the memory of that show sends her diving into her purse for Kleenex—and, according to the director, she built a powerful connection with the audience as well.

“She has her own special magic—this thing, which you can’t invent and you can’t buy, that says, ‘Come along with me,’” explains William Brown. This summer Brown will direct Romeo and Juliet for Summer Shakespeare at Notre Dame. He would have cast Jones in that had her schedule allowed. “I just think she’s a terrific person and a terrific artist,” Brown says. The fact that she hasn’t been able to extend her success to film and television, as other Chicago-bred actors have done, is more a reflection of Hollywood’s limitations than of hers, he says.

“Unless you’re 19, blonde and a size 2, it’s going to take a while for people to get you,” Brown says. “Ora Jones is just gorgeous, but not in the way you see on Friends.” For now at least, Jones is content to be the actor Chicago turns to when there’s a job to be done.

“I really just like working. I really do. You get to learn things —that’s the big fun of it,” she says. “Acting is not about standing on stage and saying, ‘Look at me; I’m brilliant.’ It isn’t about you. . . . You do all this to tell a story.”

Julie York Coppens, who covers the fine and performing arts for the South Bend (Indiana) Tribune, will become the theater writer for the Charlotte _(North Carolina) _ Observer this spring.