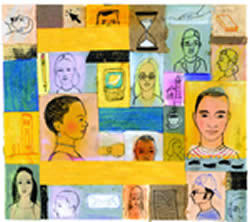 It will be 40 years this fall since Chuck Katter ’75 first heard the words “Squirrel Bait” ricochet through the hallway outside the Grace Hall suite he shared with Tony Malench ’75 and four other freshmen. The nickname was Malench’s, both a reference to his short stature and a sign of acceptance by the upperclassmen who bestowed it upon him.

“People continued to call him that for the next four years,” says Katter. “It’s not surprising to hear someone refer to him as ‘Bait’ even now, and it’s usually one of those original upperclassmen.”

Katter and Malench owe their lifelong friendship to a random pairing that took place in the old Office of Student Residences in the summer of 1971. Thrown into their freshman year at Notre Dame, the new roommates bonded over football games, dining hall meals, pep rallies and handball games at the Rock.

Both had several siblings, and fathers who were doctors, so there were some similarities at the outset. But Malench had no ND connections and didn’t even visit campus before he arrived for his freshman year. Katter, on the other hand, came from a Notre Dame family — his father, George ’41, had lived in Badin Hall. Malench was the quieter of the two, and a pre-med major, while Katter pursued business.

Nothing in this pairing would suggest that the roommates would or would not become lifelong friends. These days, in the name of compatibility and shared interests, dating and social networking sites invite us to take revealing quizzes and play games that match up our tastes in reading, games, movies and music to help us find new friends and learn more about our old ones. Many schools use similar methods to assign roommates, but Notre Dame does not.

These days students are still placed randomly into the 15 men’s and 14 women’s halls on campus, only now a computer makes the assignments. There are no athlete dorms, no specialty floors organized by major or interest. And with nearly 80 percent of students living on campus, freshmen typically find built-in mentors among the upperclassmen from their hall.

Some exceptions do exist. Students with special medical needs, for instance, might be placed in newer dorms equipped with air conditioning or ramp access. Otherwise, Residence Life directors only alter the random room assignments if the computer happens to pair people from the same hometown or athletes from the same sport.

Jeff Shoup, the director of the Office of Residence Life and Housing, says Notre Dame has always used this approach, with overwhelmingly positive results.

“I think students can always find somebody with a common interest, as well as people who are interesting,” Shoup says. “You blend people from so many histories and majors, it makes the average student who walks through the door feel more welcomed.

“We are probably one of the few schools that does it completely randomly, but the data has said that random assignments work just as well as assignments done through matching interests,” he adds. “And most students remain in the hall they are placed in as freshmen.”

It’s not hard to find happy roommate stories spanning the decades. Bob McGoldrick and Roc O’Connor, both class of 1956, were roommates in Zahm Hall as freshmen and stayed close throughout their lives. O’Connor was McGoldrick’s best man at his wedding, and McGoldrick still keeps in touch with O’Connor’s widow, Mary, 20 years after his friend’s death.

Jean Henegan ’08 found a group of eight best friends who lived in the same section of Lewis Hall for four years. They still meet up each year and often joke that they should be featured on Notre Dame promotional materials.

“Among the eight of us, we literally spanned the gamut of races, socioeconomic backgrounds, majors, and we even had a top varsity athlete,” Henegan says.

Katter and Malench also stayed in touch. They attended each other’s weddings and made yearly trips back to South Bend for reunions and football games. Eventually, they brought their children back to campus with them, and Katter’s oldest daughter, Anna ’11, witnessed firsthand the lifelong friendships formed in Grace Hall.

When the younger Katter prepared for her freshman year, she had high expectations for her roommates and her residence hall. She confesses to looking up her roommates on Facebook and anxiously anticipating what their life together in Badin Hall might be like.

“I looked up my three roommates, fabricated some seriously incorrect preconceived notions about each of them, and began to agonize about how none of these girls could possibly fulfill the expectations I had for a ‘lifelong roommate’ like my dad’s,” she says.

But despite those initial worries, she found her counterpart to Tony Malench in Kaitie McCabe ’11. For the past four years, they have shared YouTube videos, late-night runs to LaFortune for milkshakes and a Notre Dame “bucket list” that included running through the reflecting pool outside the library and climbing the Stepan Center dome.

“It is hard to imagine that had we not been placed in the same miniscule quad as freshmen, we may not ever have known one another,” says Katter.

And although some consider Notre Dame’s single-sex residence halls a bit archaic, both young women think it’s part of the reason they became such close friends.

“We’re not concerned with flirting with the boys down the hall,” McCabe says. “Instead, we’re gossiping in the laundry room, playing ultimate spoons in the hallways and watching chick flicks in our RA’s room. I think everyone is more unguarded — leaving their doors open and walking around in pajamas with no makeup on. You get to know people a lot better and faster that way.”

Naturally, the scene was different in the corridors of Grace Hall in the 1970s, but Chuck Katter agrees with his daughter that Notre Dame’s approach to dorm life relieves a lot of anxiety students may have had about fitting in. He and Malench stuck together, moving off campus after two years in Grace.

With email, cell phones and Facebook making it easy to stay in constant contact, the old roomies figure they connect — along with their extended circle of friends from Grace Hall and Saint Mary’s College — at least once a week.

Now, with jobs in separate cities awaiting Anna Katter and Kaitie McCabe, they have to confront the prospect of not being an everyday presence in each other’s lives. But as Anna learned from her dad’s relationships, graduation doesn’t mean the end.