In between the screams over the phone from my 17-year-old daughter, I could only make out a few actual words. It sounded like she said the dog had been hit. Maybe with a car. Maybe by her. Impossible to say from her unstrung wailing.

I had just begun my 45-minute commute home from work and there was no way to expedite the drive. All I could really do was stay on the phone and try to calm her down and assess whatever terrible situation had transpired between a hysterical teenager and a blond Labrador retriever with a lovely disposition and not much sense. 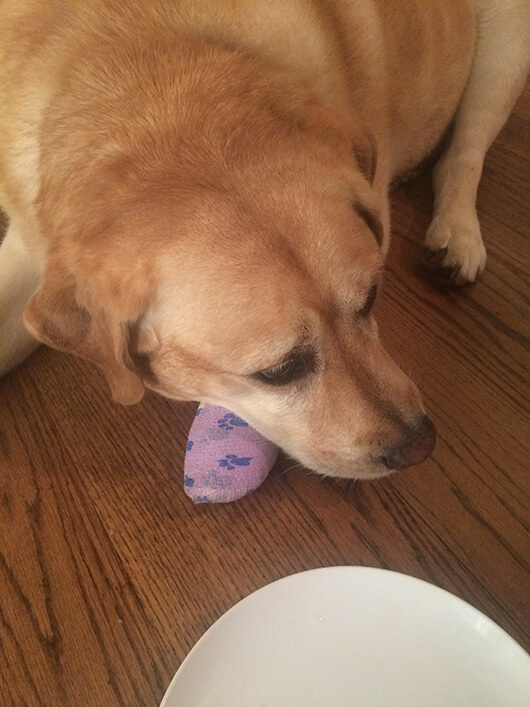 Nutmeg had a very bad day.

“You were driving the car?” I asked.

“And you hit the dog with the minivan?”

“Do you think you hurt her badly? Did you run over Nutmeg or bump her?”

Clearly, I was not getting anywhere. I knew that she had been heading to a college essay writing class, so more than likely she had been pulling out of the garage, not driving quickly. I knew that Nutmeg, God love her, regularly ran up to and behind vehicles. I knew this because I frequently saw her joyous face on my in-car video camera as she popped up behind my moving car. She also ran directly into the car as I rolled down the driveway. She did not seem to have a sense of fear at all. Rather, there was always the trusting gallop of a dog who assumed she was safe because we all loved her.

I made an executive decision. I would have Emily get her younger sister, the high school freshman, Sarah, and put her on the phone. Sarah would, with great calm and capability, report on the situation with an outsider’s detachment and Woodward and Bernstein accuracy. My girl could be counted on to tell me whether Nutmeg was suffering a minor injury or tire marks across her flanks.

“Emily, I want you to find Sarah,” I said. “Just go inside and get her and hand her the phone.”

My weeping, traumatized oldest child went off in search of her sister. I could hear muffled conversation, and then a phone being passed.

“Hi Sarah. Listen very closely. I need you to tell me very calmly what happened and what condition the dog is in,” I said, waiting for illumination.

Instead of a war reporter, I got the same hysterical screaming, only this time it was coming from a helium voice. Sarah has never lost that high-pitched baby sound, and she was even harder to understand than Emily.

This situation would require third-party adult intervention, so I phoned a friend, much like they do on Who Wants to Be a Millionaire. I asked my friend to get to my house, assess the situation, put the dog in the car if possible and drive to the veterinarian, which was on my way home.

“Look,” I said. “I don’t know what you are going to find when you pull up. The dog could be dead or chasing a squirrel. Or something in between.”

When my friend arrived, he reported that the dog was standing upright but bleeding from her front leg. He did not suspect internal injuries. Once in the car, all four beings headed to the vet.

I was relieved to see Nutmeg in the parking lot. She looked happy, despite the bleeding. We carried her in and the vet began the examination. Nutmeg began to pant because this was the place where they hurt dogs.

I watched Emily’s mouth drop open with horror. Her lower lip quivered. She could not answer. She looked at me with the wide eyes of a much younger child who had broken a Ming vase.

I never found out why the time of day mattered. Perhaps there is a particular period when most dogs are run over.

Nutmeg was extremely lucky. She had no broken bones or serious injuries. The vet shaved the area, cleaned it and wrapped up her paw with an adorable pink bandage covered in dog bones. I wondered if boy dogs got blue bandages.

We headed back to the car with the panting patient. My girls were beginning to come out of their shock and we discussed the need for dinner, because someone always needed to be fed, even in a crisis. I grabbed some take-out on the way home — Chinese food in many white containers and an eggroll for Nutmeg.

Back at the house, we helped Nutmeg inside. She took a long laborious drink of water and then did that thing dogs do where they look up quickly and half the water spills from the sides of their mouths. Then she walked to the kitchen and laid down on the floor mat with a long sigh, her chin resting on her pink-bandaged paw.

We opened the food and sat, as we had so many times before, around the kitchen island. There was something comforting and familiar about the years of shared meals in this spot. I remembered the time that Sarah, then very young, had watched deer leaping past the kitchen window and said, “Look Mama. Kangaroos.”

“Yeah?” she asked, looking up from her chicken and broccoli.

“What time did you run over the dog?”

Then there was laughter. Hard bellyaching laughter that could not be contained.

“Why did she say that?” they sputtered in between howls.

“What time did you flatten the dog under your tires like a pizza?” I asked.

We laughed until we could laugh no more. The laughter was a relief and a release after all the emotion that day.

This was the way that, over time, family stories, even sad ones, took on a twist of the ridiculous. Like at my dad’s funeral when my mother told Jeff, the girls’ father, that she would probably faint going down the aisle, “but just keep going.” Or when Jeff told Emily she was not going to throw up, and she then recreated the vomiting scene from The Exorcist. Or when Sarah trapped the cat in a living room tepee, fell on it and came out with war-paint scratches on her baby face. Or the time I was so angry with the kids that I slammed down my purse while driving, threw the car into reverse and killed the transmission.

All those things that at the time seemed terrible are now, with the benefit of years, the good stuff of lore, like a totem pole stacked with crazy faces. They are the things we bring up, long after the dance recitals and lacrosse games and graduation ceremonies were forgotten. They are the real stories, better than any airbrushed photo on a Facebook feed. The bad, the ugly and yes, the funny — we found the absurd in all of them.

Later, as Emily walked into the living room to pet and pamper our dog patient, Sarah stayed behind to help me clean up.

“Let’s say that to her on her wedding day!” she whispered. “Like right before she walks down the aisle, let’s ask what time she ran over the dog.”

It was a total deal.

Beth Salamon is director of communications, marketing and television at Rutgers University’s Division of Continuing Studies and Distance Education.