Standing on the steps of the Washington Hall stage, Christy Burgess made a pretty brazen introduction. The next two scenes we were about to see, the seventh and eighth of nine Shakespeare interpretations that local school and community groups performed on Sunday, July 17, were the cutest she could remember. 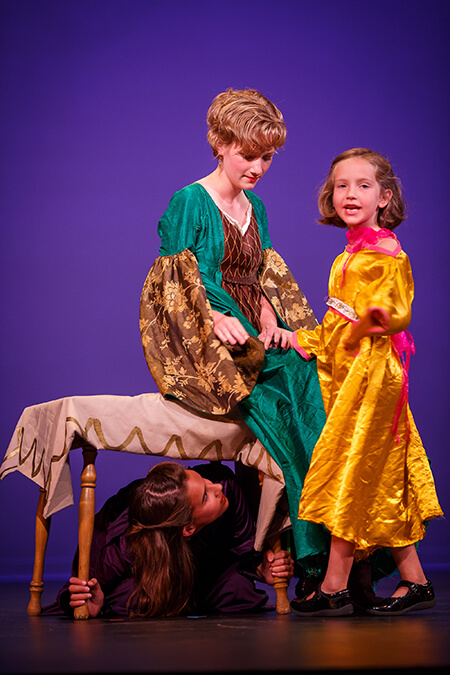 Seeing kids not far removed from learning to read and write reciting Shakespeare is irresistible. And the performers lived up to Burgess’ promise: The scenes “Popcorn, PJs and Pentameter” and “American’s Top Pop Sonnets” were, indeed, aww-inspiring.

Like the other seven scenes, they were also polished, creative and funny in their cracked-mirror reimagining of some of the Bard’s greatest hits. Cute was the least of it.

ShakeScenes is, for want of a better comparison, Shakespeare-meets- Laugh-In. I would say “meets- Saturday Night Live,” but it’s funnier than that, weirder in a good way, overflowing with the fizz of kids discovering this stuff for the first time and treating it like it’s a two-liter soda bottle — and they’re the Mentos.

From the deft choreography of a step-dance introduction to Henry V to the sitcomy will-they-or-won’t-they between Beatrice and Benedick to the Stratford-upon-Endor mashup called “The Jedi Doth Return,” this was Shakespeare spun like cotton candy. Comedies and tragedies alike.

Romeo and Juliet appeared in a couple such confections and, their sad demise notwithstanding, made good fodder for pratfalls, prop comedy and old reliable dudes-in-dresses humor. Parts are equal opportunity these days. The actors playing Trinculo from The Tempest and Benedick from Much Ado About Nothing switched the historic Shakespearean gender role-reversal to comic effect.

And that was all from just one of the two free ShakesScenes shows. Saturday’s performance featured nine different scenes, including a “Choose Your Own Bardventure,” “The Bachelorette” and “Hamleton,” pairing the Prince of Denmark with the Founding Fathers who are currently strutting and fretting upon the Broadway stage.

“Though this be madness, yet there’s method in’t,” Polonius said about other matters, but it applies here.

“Even with his imagination,” Burgess wondered in the program, “would Shakespeare have thought of this in wildest dreams?” 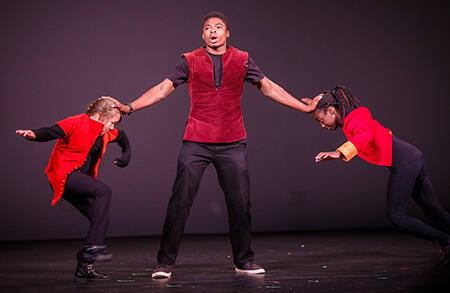 Imagine: Shakespeare’s words translated to outer space, or to the even more oxygen-deprived and alien atmosphere of reality TV, often by children in full command of the Elizabethan language, winking their way through it all? The dreaded memorization of many high school student nightmares was transformed, in the vision of these directors and the performances of these actors, into something more like recess.

“They don’t just speak the language,” Burgess continues. “They embrace it, play with it and enjoy it.”

Although ShakeScenes is over, it was just the curtain-raiser for this summer’s Notre Dame Shakespeare Festival. The Young Company’s performance of Pericles is touring the South Bend area through August 22. The Professional Company’s production of The Tempest, directed by Cirque du Soleil’s West Hyler, appears August 16 to 28 at the DeBartolo Performing Arts Center.

Burgess made no promises, but I will: History suggests Pericles and The Tempest will be crowd-pleasing spectacles, but neither will out-cute ShakeScenes. Or, to take liberties with Moth’s words in Love’s Labour’s Lost, neither will outdo it in creating a great feast of language from stol’n scraps.