On a brisk January morning my senior year, my friends and I awoke to a big piece of campus news. A new construction project was coming, administrators said, that would be unlike anything the university had previously attempted. Boasting three massive buildings and the promise of a new student center and enhanced stadium facilities, it would be known as Campus Crossroads. 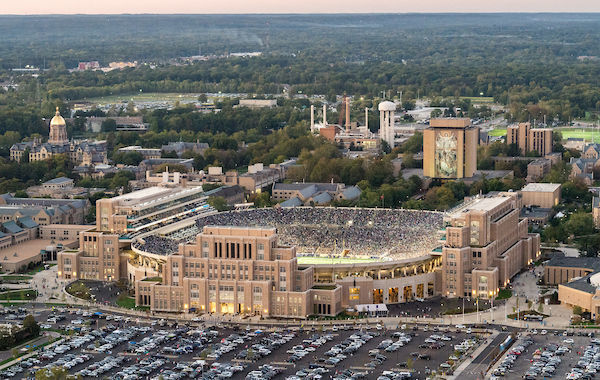 The new Crossroads buildings as seen from above. Photo by Barbara Johnston

We were, to put it mildly, skeptical. We didn’t like the price tag, or the attempt to make the football stadium the center of campus life. We definitely didn’t like the Jumbotron (and yes, I know it’s not a Jumbotron). In quiet mutterings under our breath, we also didn’t like that future students might get another shot at the Panda Express that we’d been so cruelly denied in the 2012 renovations of LaFun.

Four years later, the final building of the Campus Crossroads project has officially opened for business — and even I have to admit, this thing is pretty cool.

For those who don’t know, or could use a refresher, the basic layout of the project is this. On the east side of the stadium, the nine-story Corbett Family Hall houses the departments of psychology (starting this spring) and anthropology and the expansive new Martin Media Center, home to the University's multimedia services. On the south end, the music department occupies the seven-story O’Neill Hall. Over on the stadium’s west side stands the nine-story Duncan Student Center, which includes three new micro-restaurants and the multi-level Smith Center for Recreational Sports.

My tour of the buildings on Monday, January 15, began with O’Neill, the new digs of the Department of Music and SMND, the Program in Sacred Music at Notre Dame. I spent many an evening in Crowley Hall of Music as an undergrad rehearsing for concerts and plays, so I feel I can attest that this building is a serious upgrade to the department’s former home. The hall features two state-of-the-art performance spaces, one a minimalist and modern “white box” and the other a more traditional recital hall with seating for 170 — which venues music department head Peter Smith describes as the building’s Greenwich Village and Park Avenue.

The building also features a dedicated home for the University’s music library, a wide array of rehearsal spaces and a collection of instruments that includes four practice organs and a new nine-foot Steinway grand piano that cost more than my childhood home. The top floor of the hall has the distinction of backing up onto the stadium’s new video screen. I’ve still not been won over by the big screen, but SMND director Margot Fassler dented my resolve somewhat when she pointed out the puns that can be made about musical scores and scoreboards.

Corbett Family Hall, though I saw only parts of it on my tour, also seems impressive. The classrooms and laboratories look pristine and state-of-the-art, and, most important, the building gives a dedicated home to two departments whose facilities were previously scattered all over campus. As in all of the buildings, no detail was too small for close attention here — a few rooms even have (very cool) dry-erase paint, where entire walls can be written and re-written on like giant whiteboards.

Kitted out as O’Neill and Corbett may be, the granddaddy of the Crossroads buildings is Duncan Student Center. It’s hard to know where to start with this new Duncan. I could start with the wall of stadium seating with — millennials and football-weekend visitors rejoice — power outlets at every seat. I could start with the yards-long fireplace. I could start with the new student media offices, like the light and airy room that’s replaced the basement dungeon where I worked as a Scholastic staffer in my undergrad days. But the biggest wows in the building are the elements most hyped during the construction phase: the fitness facilities and the micro-restaurants.

RecSports director Mark Williams aptly summed up the former when I asked him to compare Duncan’s new three-story climbing wall with the old wall in the Rock. 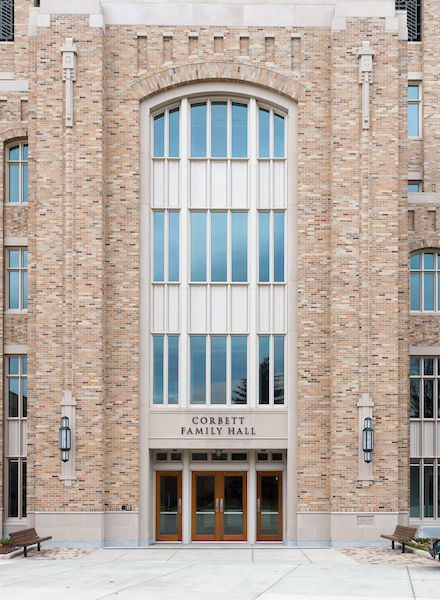 In addition to the enormous wall, the fitness center features 28 treadmills (compared with 9 in the now-retired Rolfs), 28 stationary bikes and 27 ellipticals, plus a basketball/volleyball/badminton court and a laundry list of other amenities. Four gleaming activity rooms and a cycling room promise a schedule of more than 40 group fitness classes each week, where I look forward to embarrassing myself in front of in-shape undergrads for months to come.

The only feature of the center that seems not to have been thought out is the tantalizing scents wafting past the treadmills from the restaurants on the floor below.

While there’s still no Panda Express, the eateries in this new student center are excellent alternatives. Star Ginger offers a Vietnamese/Thai menu (Panda-esque orange chicken included), and Hagerty Family Cafe features both Intelligentsia coffee and an expansive selection of gelato and crepes. The most on-the-nose for Notre Dame students, though, is Modern Market, a “farm-to-fork” concept restaurant offering three meals a day with a focus on whole foods and sustainability. Their menu reads like a millennial’s Barbie dream kitchen, featuring everything from artisanal wood-fired pizzas (watch out, Reckers) to kombucha, gluten-free baked goods, and — drumroll, please — avocado toast. Many a Flex Points quota will be depleted here.

At the end of the day, I’m still a little bit of a skeptic. The old stadium will always have a place in my heart (and, thanks to a rowdy game senior year that broke my row of bleachers and sent us all scrambling for splinters to take home, a place on my mantel), which makes me wary of new additions that turn the stadium into a slick, new mini-neighborhood. And as fancy as the buildings may be, I doubt I’d have trekked from Howard too often for hip-hop dance class and pho. But I can’t deny that these buildings add some stunning new facilities to our campus landscape, for departments that, in many cases, desperately needed them.

I may be a curmudgeonly alum, but, when it comes to the changing campus map, we’re at a crossroads — and none of the paths before us are all bad.