Liam Neeson asked us to hold our applause. The actor, looming over a lectern at the DeBartolo Performing Arts Center, prepared to recite W.B. Yeats’ poem “Easter 1916” to introduce the Keough-Naughton Institute’s forthcoming documentary about the Irish rebellion. Save the ovation, he requested, until after the film.

The March 4 gala premiere of 1916: The Irish Rebellion was an occasion to hail an epic project years in the making and to bask a little in its star narrator’s wattage. We were all having fun — Neeson included, mugging for the cameras during his red carpet entrance and joking about the Ireland amateur boxing championship he said was stolen from him as a boy. He was the bold-faced name in the crowd and game to play the part. 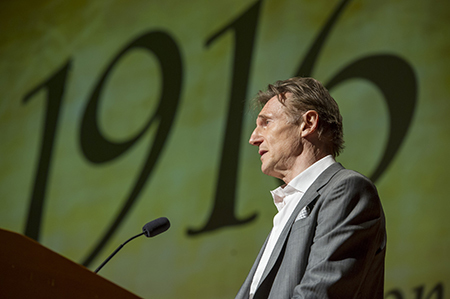 From my seat toward the back of the Leighton Concert Hall, his request for quiet felt like an attempt to redirect everyone’s attention to the larger purpose of the event. To ask, in effect, for a moment of silence for the people and events the documentary chronicles.

Men like “Macdonagh and MacBride / And Connolly and Pearse,” immortalized in Yeats’ verse and in Irish memory for their ill-fated first strike on a path that led to eventual independence from Great Britain. Citizens who became revolutionaries, and from whose deaths at the hands of British executioners — Yeats wrote and Neeson read — “a terrible beauty” was born.

In the hush that followed the reading, I thought I saw another dignitary in attendance, Ireland’s ambassador to the United States, Anne Anderson, wipe away a tear. Then the house lights dimmed and the movie began, an 80-minute version of the three-part, three-hour documentary that will air on public television this spring.

In a conflict dating back centuries that can still stir animosity on the partitioned island, the 1916 Easter Rising was a blink in time. And, militarily, a failure. Irish revolutionary leaders surrendered to the British within days. Secret courts martial sent them to firing squads.

But the brief burst of fighting in Dublin left an enduring mark on Ireland and the world — in part because the executions made martrys of the leaders, and patriots of many ordinary Irish citizens who were not previously sympathetic to revolutionary tactics.

Logistical and communications miscues, and the size of the rebel force compared to the British military, doomed the operation. Yet even in defeat, the effort exposed the first cracks in the British Empire, weakening a global grip that would continue to loosen throughout the 20th century.

Although remembered as founding fathers who lit the way to independence decades before it would be truly won, the Easter Rising’s leaders appear in 1916: The Irish Rebellion in all their flawed, tragic humanity. Combatants and citizens on both sides have a voice, heard in vintage interviews conducted decades after the fact but still haunted by what they witnessed. The official British view of the insurgency as nothing short of wartime treason, and the common Irish perception of it as disloyal to countrymen dying in Europe, also deepen the film’s perspective.

As a centerpiece of Ireland’s Easter Rising commemorations, Ambassador Anderson said in her introductory remarks, the documentary serves history well in its avoidance of simple conclusions and Irish self-congratulation. “It’s a film that interrogates and challenges, and that is exactly what we need and what we want in this centenary year.”

An achievement worthy of the standing ovation it received as the credits rolled.