I went to see the cars.

It was a nice day, I was tired of my office, the students were back, campus was calling. An exhibition at the Snite — One Hundred Years of Automobile Design — gave my excursion a sense of purpose and direction.

It’s always good to step out when the day gets too routine. Especially for those of us in the creative arts. Sometimes the imagination needs to be re-lit.

That’s what I told myself when I walked out, before I found myself staring at the 2014 Ferrari F12 Berlinetta, its brilliant red body curvy and sleek. A masterpiece of beauty and power, speed and styling and 21st century technology. That’s what you see and want to touch, tracing the lines with your fingers, running your hand over the brightly lacquered body, its sweep and contours, the elegant flow of its shiny aerodynamic design.

But this is a “no-touch zone” and so I followed the long look with the information sheet and learned that the aluminum body and chassis is made from seven distinct alloys; that it holds a 730-horsepower, V-12 engine; that its braking, traction, stability, suspension and differential are all computer monitored and controlled; that the “air channels sculpted into front fenders increase downward pressure on tires to enhance traction when traveling up to 211 mph”; and that it is “the most powerful Ferrari ever conceived.”

And yet the total package is exquisitely streamlined, with no extraneous parts, no unnecessary appendages, no sharp corners, no blocky angles or awkward tangents. Nothing is out of place. It is pure and powerful functionality; yet it is a masterfully created work of art.

Those who labor in pursuit of precision and grace, economy of parts and perfected details, striving to attain that place where less is more and simple lines speak with force will appreciate what all is accomplished in this Ferrari F12 Berlinetta.

But the automobile didn’t start there.

To see its origins the Snite exhibition offers a 1905 Cadillac Model F. It is a good-looking, fancy vehicle that pretty closely resembles its predecessor — a fancy horse-drawn wagon. Everything is square and upright, open-topped, mostly made of wood, with shiny gold lamps (oil lanterns actually) and erect, upholstered seats. It features a 9-horsepower, single-cylinder engine and is capable of going 25 miles per hour.

But it too has its beauty marks, its elegances, and is a fine marriage of the day’s inventiveness and technology. And sometimes what’s gained by looking back is not to measure how far we’ve come but to imagine what it was like back then.

My father talked excitedly of the first time he saw a “horseless carriage” in his little hometown in northwest Louisiana and he’d tell stories of growing up and his widening horizons and adventures by describing the series of cars that took him places. He caught that dream early in the 20th century as the automobile — and all it symbolized — was capturing a nation’s fancy.

The third classic car in the exhibition is a 1933 Packard Twelve and this Model 1005 Coupe is only one of five ever produced. It’s long and luxurious, with a stylishly elongated front end, arcing fenders, running boards and a rumble seat. One of the fastest cars of its time, it exudes class and riches, and the melding of the era’s finest design, engineering and workmanship. It speaks eloquently of a period in American history in which the automobile reflected wealth and status, vision and style, boundaries exceeded and manufacturing prowess.

All three vehicles come from the Jack B. Smith Jr. Automobile Collection, owned by the Elkhart County, Indiana, businessman and Notre Dame benefactor who has called the cars “sculptures on wheels,” though he is said to take them out for a drive now and then.

So I, too, decided to do some further touring of my own, seeing what else there was to see among the Snite’s temporary exhibitions. One was a watercolor show, the intriguing work of Danae Mattes, big and bold in blues and tans, evocative of parched and/or watery landscapes. Very cool. With notes that some yoga, Tai Chi and meditation classes will take place in that hall, using the art for inspiration. Soothing, yet arresting.

Finally, I found my way into a couple of rooms entitled “Counter-Archives to the Narco-City,” with artwork intended to commemorate the deaths of innocents and to heighten sensitivities toward “the two deadliest cities in the world,” Ciudad Juarez, Mexico, and San Pedro Sula, Honduras. This is art with a conscience, a call-out against injustice. 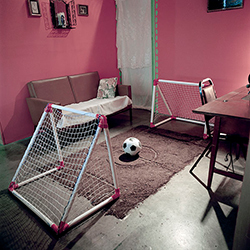 The artists’ statements — Adriana Corral created the installations and Alma Leiva shot the photographs — spoke of narcoterrorism, organized crime and state violence, women found in mass graves, the 43 Ayotzinapa Rural Teachers’ College students who disappeared in Mexico one year ago, and the 68,000 unaccompanied minors from Honduras, Guatemala and El Salvador who were apprehended in 2014 crossing the border into the United States.

The artwork — whether names obliterated or, mostly, photographic images of childhood objects carefully arranged in set pieces with striking Catholic and Mayan iconography — effectively give pause to the idle sojourner. And what started for me as a leisurely afternoon outing took a more serious turn, made me look and think harder about the world we live in. Got me — even briefly — out of the complacent pleasantness of my day.

And when I lingered, as I usually do before leaving the Snite, in the room with Native American artifacts (from ornamental beadwork to paintings of warfare), it made me think, too, about all the ways we have chosen to express ourselves, what we have poured our thoughts and passions into, all the things we have created (for both beauty and meaning), the ways we have tried to touch others, to share ourselves. It’s what makes us human.

A predictable conclusion perhaps, but one that occasionally needs refreshing.