It was a time of celebration, theatrics were in order, the mood was indeed festive. Shakespeare was in the air.

There was a ribbon to cut and speechmaking by a mayor and a university president, a dean and a head librarian. TV stations sent their lights, cameras and reporters; the local paper sent a writer and photographer. Other scribblers and picture-takers could be spotted in the crowd of 100 or more who gathered in the new north entrance of the Hesburgh Library (whose airy, bright and open space provided a welcoming venue and another reason to smile). 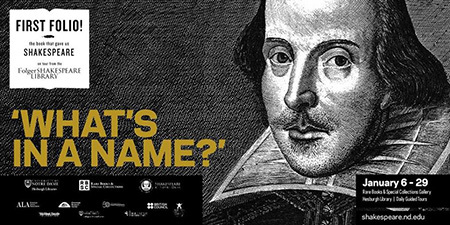 The newly crafted second-floor balcony would help set the stage as period-piece costumes stood by on the main floor and a replica of Shakespeare’s own Globe Theatre served as a vast, atmospheric backdrop for the convivial ceremonies.

This time the time, Hamlet might surmise, is not out of joint.

And then — to everyone’s surprise, heads turning, talk suspended — a voice calls out. A youthful-looking boy, impersonating Romeo, recites the familiar lines and strides among the grinning onlookers, gesturing with his arms, delivering his sweet soliloquy and stumbling over not one line. Ah, sweet youth.

And as Paul Ferguson, the senior from South Bend’s John Adams High School, calls to fair Juliet, Tiana Mudzimurema, another teen with the Robinson Center Shakespeare Company, responds from above (that second-floor library overlook) with the much-anticipated “wherefore art thou.”

Their dramatic presentation ends with the audience properly warmed up and Scott Jackson steps to the fore. Jackson is director of Shakespeare at Notre Dame, and his happy enthusiasm is infectious. Even though the bard’s presence has been spreading across campus for more than a decade, this grand “Year of Shakespeare” represents a major university undertaking across disciplines. It’s a big — and buoyant — deal.

Two international conferences are scheduled, several performances in the works (including those Robinson Center students, the South Bend Symphony Orchestra and the world-acclaimed Actors from the London Stage), scholarly lectures slated, a convening of those who bring Shakespeare into prisons planned, workshops arranged, and much more.

Diane Walker, head of the University libraries, spoke of the value of the printed word, the role of libraries today and noted that the year’s Shakespeare exhibits will bring some 1,200 area schoolkids through their doors. Father Jenkins hailed Shakespeare’s ability to define “who we are and how we are connected to each other,” and also applauded the collaboration between campus and the local community in the year’s planned events.

South Bend’s Mayor Pete Buttigieg quoted from The Comedy of Errors, spoke eloquently of the enduring power of the written word and recalled his own Shakespearean moments in high school, relating his experience to that of all those “finding their own voice through Shakespeare, proving that even nerds can talk on stage.”

It was left to John McGreevy, dean of the College of Arts and Letters, to proclaim the Year of Shakespeare officially launched and calling (twice) for the ribbon cutting.

The real star of the show, however, was sequestered two or three rooms away, boxed under glass.

There in the anteroom of the Rare Books Collection, awaiting a long line of post-unveiling admirers, was a 900-page volume, Mr. William Shakespeares Comedies, Histories & Tragedies. It is one of only 233 copies known to exist, valued at more than $6.2 million, one of the most treasured books in literature.

Published in 1623 by two of Shakespeare’s fellow actors (Shakespeare never compiled his creations), it includes 36 of The Bard’s plays, and is known as the First Folio. It is the book that brought to the world the playwright’s most iconic dramas.

This copy, its pages opened to Hamlet’s “To be or not to be” deliberation, is on loan through January from the Folger Shakespeare Library in Washington, D.C., which holds 82 copies of the First Folio. To mark the 400th anniversary of Shakespeare’s death, copies of the First Folio are being exhibited at 53 sites in the United States, with the Notre Dame appearance its only stop in Indiana.

But the exhibit is much more than the encased tome. There are other displays that expound upon and illustrate Shakespeare’s power and influence in literary and cultural circles. And there are the Hesburgh Library’s own sheaths of subsequent folios and — perhaps niftiest of all — a replica of that First Folio, opened on a table, inviting a visitor to turn its pages, peruse its passages, read those familiar words, written in that weird, old-time font style, and ponder the words and lines studied and delivered for 400 years as some of the most awesome truths and witticisms, verse and dialogue known to the human race.

The facsimile appears just as the original did 400 years ago, put together by a couple of actors who wanted to preserve the clever, brilliant, insightful lines they spoke, but who probably had no idea what an impact those words would have on the world for centuries yet to come.

Kerry Temple ’74 is editor of this magazine. He studied Shakespeare under James Robinson and Paul Rathburn as an English major.