The first thing I noticed was the crowd.

When I took my seat in the packed Decio Theatre last week, I glanced around the room and saw some of Notre Dame’s top administrators and deans dotting the first few rows, soon to be joined by University President Rev. John I. Jenkins, CSC ’76. Professors, priests and other staff members also turned out, along with a good number of students and local alumni.

More than most events on campus, this seemed to be a thorough cross-section of the Notre Dame community. And Ross Douthat, the man we’d all come to hear speak, knew how to play to this crowd.

Notre Dame, he proclaimed early in his lecture, is the “preeminent and most American” of all American Catholic universities. I suspect that Douthat, a conservative columnist and blogger for The New York Times, genuinely meant it. Still, the line engendered a heavy dose of good will from the audience. 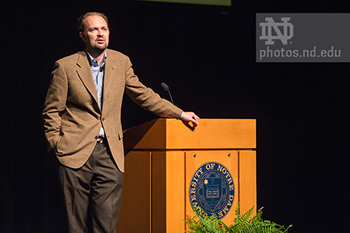 Douthat had come to campus and this podium in the DeBartolo Performing Arts Center as part of the 2015-16 Notre Dame Forum on “Faith, Freedom and the Modern World,” a re-examination of the Second Vatican Council 50 years after its concluding session. His lecture, titled “Catholic Freedom and Secular Power: How the Religious Liberty Debate Has Changed Since Vatican II,” focused on the Catholic Church and its relationship with the United States government, a topic of particular relevance on campus given Notre Dame’s high profile legal battle over the federal contraception mandate.

The talk began as a history lesson. The Harvard alumnus and author of Bad Religion: How We Became a Nation of Heritics, traced the roots of Catholic scholarship on religious liberty and highlighted Dignitatis Humanae, the Council’s 1965 Declaration on Religious Liberty. He quickly worked his way to the present and delivered a sobering message: The American Church has weakened from the position it held in the mid-20th century. Mass attendance and religious vocations have decreased, and the cultural potency of Catholicism in America (Douthat cited movies like Going My Way and the Bells of Saint Mary’s) has faded. Yet the Church has not fallen so far as to be treated as a fringe religion. It remains large and influential enough to create enemies, he said, but too weak to effectively fight its battles.

Of the remedies Douthat suggested, one in particular resonated with me: The Church and its supporters need to work harder to win the cultural and political debates on the issues. It’s not enough to rely on Constitutional arguments when religious liberty is threatened, he said. The First Amendment will only offer so much protection, and the Church risks appearing increasingly out of touch with modern thought and practices.

In the long run, Douthat said, Catholics would be best served making compelling arguments for the appeal of their positions on controversial issues. By winning those arguments, they might overcome those who seek to limit religious freedom in the political and cultural spheres, not just in the courts.

While he didn’t frame it as such, this part of Douthat’s lecture could be interpreted as a call to arms. In his column and on his blog, Douthat regularly writes about issues concerning or intersecting with the Catholic Church, often engaging critics in a respectful but direct and persuasive manner. He doesn’t do so in the pages of America, First Things, or other Catholic publications. He pleads his case in The New York Times. And, by Douthat’s own recommendation, the Church and its allies need more well-intentioned folks doing the same.

That’s when I thought back to the crowd — to the administrators, professors and priests in the room who have the opportunity to be persuasive voices on the great moral issues of our time. It’s when I thought to the students present, who spent more than hour of this beautiful September afternoon taking in a lecture on religious liberty by a Catholic convert who in 2009 had become the youngest regular opinion writer in the Times’ long history.

It gave me an infusion of optimism. If the Catholic Church in America needs more advocates making its case in the public square, who better to lead the charge then those shaped and inspired by the preeminent and most American of our country’s Catholic universities?