The school year is about to start and, as a journalism student from Denmark and a newcomer to campus, I’m doing what I can to experience it with all my senses.

Through the magazine office windows on the fifth floor of Grace Hall, I can see lines of cars containing new students and their families. I have tasted the great food in the dining halls. And, I’ve found the one place where you are currently able to touch the legendary Notre Dame Stadium. 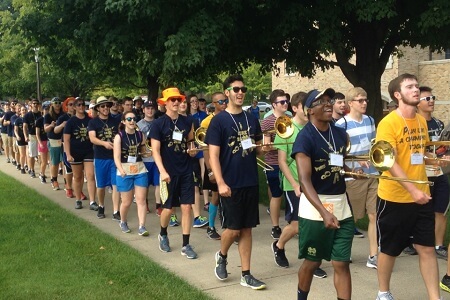 But how do you hear the start of another academic year at Notre Dame? After Thursday, I think there’s only one way: The March Out of the Band of the Fighting Irish.

I had been told of this tradition with time to plan ahead, so I headed over to Ricci Band Rehearsal Hall in the morning. I didn’t know where that is, but thanks to the drum section I ended up in the parking lot where hundreds of casually clothed but excited musicians had assembled. First year students and veterans alike were talking, some making new friends and bracing themselves for four days of audition, others catching up after the summer.

Suddenly the drums exploded in a more determined rhythm than before: Showtime!

The musicians released their excitement in loud cheers — the first of many throughout the morning — as they emptied the parking lot and made for their spots on the road just north of the hall. But before they marched off, they paused for prayer. The priest touched on the band’s traditions and camaraderie — and the fact that not everyone present would make it.

For some of these first year students, this first march would be one of the last they’ll make with America’s oldest university marching band. By Sunday night, only the best will have secured a spot. It’s common for as many as 500 students from Notre Dame, Saint Mary’s and Holy Cross to try out for the band, which typically retains some 375 or 400 members.

But on Thursday they all seemed cheerful, ready to show everyone that they belong.

At some inaudible command, the band turned and, to the excitement of the crowd of parents, band alumni, University staff and other spectators, played a warm-up scale. I was surprised that such a simple thing could get me so excited. March Out was about to begin.

Led by the head drum major, looking as confident as possible, the band started to snake its way toward Stepan Fields, where it will spend the days ahead practicing next to earth movers and a giant mountain of dirt that is destined to become the site of Ricci Family Fields, the band’s first permanent outdoor rehearsal space. The route took several turns through campus, but I suspect that if they had followed a straighter path, the front of the line would have reached the field before the back had even moved.

“This is the largest first year group we have had in a long time,” said Mirek Stolee ’17, a mellophone player and member of the Core Band. Made up of juniors and seniors, the Core Band is a group of experienced musicians who help the directors and drum majors by teaching prospective band members how to march, what to play and when to play it.

I was determined to see the whole band, so I let it all march past me. “That’s my son!” one dad yelled as a new section passed by. Dozens of well-wishers along the route sported band merchandise. One t-shirt read, “One Band. One Goal. Live the Tradition.”

At first, only the drum section was playing. On cues, the whole band would yell “Irish!” or “Goooo Irish! Beeeeat Longhorns!” — already prepared for the first football game of the season. As the last lines passed me, I began making my way towards the front, and could hear groups chanting “5, 6, 7, go!” “5, 6, 7, go!” as I approached the middle of the marching column. One line at a time, half the students would break away and fall behind the other half, making the band narrow enough to navigate along campus sidewalks.

Running, I nearly reached the front of the band as it cleared Hesburgh Library on its way toward Stonehenge. Then came that burst of sound we had all been waiting for: The Notre Dame Victory March at full power. It was clearly a touching moment for the endless line of proud parents. Along the way I met Sue Ravasio, who was witnessing March Out for her fifth straight year. Her son, Chris ’16, a saxophonist, was a band member during his four years at Notre Dame, and now her daughter, Cara, a freshman piccolo player, is hoping to attempt to do the same. “I love it,” she said. “I played for the band in high school, so this brings back some memories.”

Approaching North Dining Hall, the music stopped. (More time for “Go Irish! Beat Longhorns!”) Then, as it squeezed through the gap between Grace and Flanner halls, the band took up personalized cheers with pieces of advice and evaluation for each other.

And when the band reached its practice field it spread out to the cadence of “5, 6, 7, go!”

They had made it. So had the entourage of parents, friends, professors and staff running to keep up. Then everything stopped and, after a moment of quiet, it was our turn to make some noise. Cheers and high fives were plentiful as the head drum major prepared to address the band from the top of a ladder.

It’s clear that being a part of this band is special. It is more than just tradition and camaraderie the priest mentioned in the prayer. It’s the hard work, too. The Notre Dame Band has called itself “America’s First, America’s Best.” That’s a lot to live up to, especially for first-year students — and those responsible for teaching them.

“It can be overwhelming. We’re just throwing them in there, telling them to follow our lead,” Stolee said.

It’s a fun lead to follow. Heading back to Grace Hall, I found myself starting to regret that I didn’t work harder on my trombone skills as a teenager.

Rasmus Schmidt Jorgensen is a graduate of the Danish School of Media and Journalism and a former intern at this magazine.