I have crossed campus hundreds of times over the years, but this walk felt different and I’m not sure why. 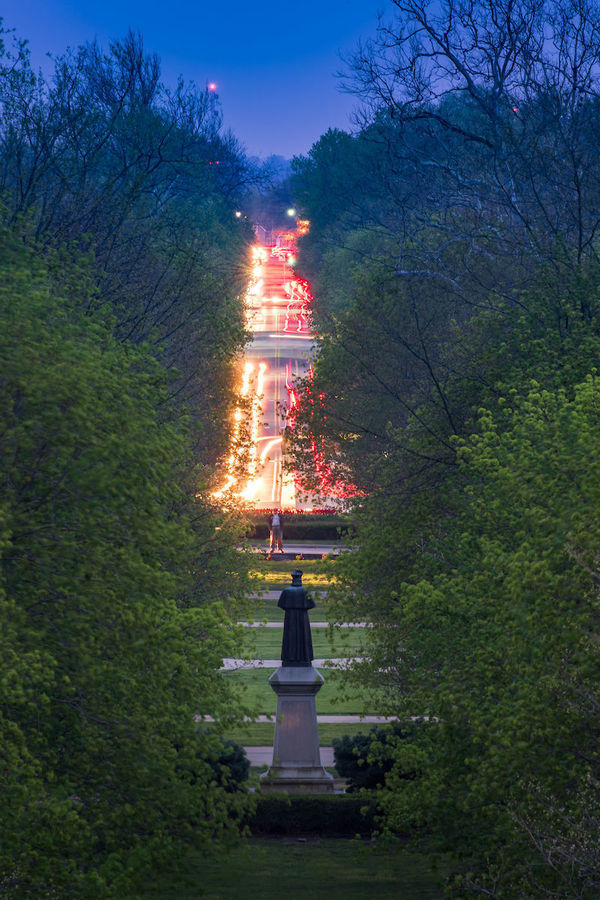 Maybe partly, too, because I exited the Main Building from the front steps. Standing atop the long porch, looking out over the main quad on a cold but sunny spring day, I was struck by how long it’d been since I stood there. I couldn’t remember. I had worked in that building for 20 years, but not since it was renovated some two decades ago. Since then, I have ridden elevators to my occasional meetings on the fourth floor, slipping in and out the back as I return to Grace Hall.

But today I was headed to Eddy Street Commons for lunch, and I was stopped by the moment, the vista. Campus at my feet. But barer somehow. The magnolia trees that once flanked the central walkway were gone. How long ago? And no Emil Hofman — Emil T. of Friday quiz fame — sitting on his bench. Back in the day. Those Friday, post-quiz lunches in the fall of 1970 when Dave and Duffey would obsessively compare answers: “Whadja put for number 4?” The chemistry prof was a dominant power on generations of pre-med students — with a reputation known as far away as the humanities.

After the magazine published Brendan O’Shaughnessy’s profile of the legend in 2011, Hofman and his wife, Joan, showed up at our offices with wine, cheese and bread and presented us each with an Emil Award. It’s funny how the world turns around.

Hofman spent many hours of his retirement parked on a bench at the foot of these stairs. For some time now — though not in my era — legend has forbade students from walking these steps until graduation. I was told once that Brady Quinn, football star and poster boy, had honored that tradition. There’s a newer ritual now too: graduating seniors mobbing together their final night on campus. Champagne, goodbyes and raucous communal solace.

Today, students are scarce already, scattering away on young-fun missions. Some are towing their suitcases behind them, wheels rolling and clattering on the sidewalks. My kids and I would ride circles around these walkways once, wheeling around the Jesus statue. “Jump, Mother, I’ll catch you.” I laughed when I first heard that — on my initial visit here, coming up from the Grotto, Dooley’s letter, Corby Hall, Sacred Heart, the “God, Country, Notre Dame” door. I remember the first time — stepping onto this tree-shielded quad, the Sorin porch and turret rooms. Holy moment.

Even as a sixth grader, I knew important things were happening here. I could sense something sacred and smart, an alert seriousness in those striding by, and could only imagine the intelligent transactions taking place in the worn and solemn edifices all around. This, I thought then, is the way College is supposed to feel. Oh, and I remember a football Friday afternoon, many years later, joining the Duffey clan (brothers, nephews, uncles, cousins) for a rollicking touch-football game on this quad, wet slippery grass, sidewalks and benches and trees in the way, with me sweating in my slacks and work shirt (shirttail out), giving a wave to the University president walking by.

I can no longer pass the Sorin statue without recalling the day I was walking with the great Larry Cunningham, theologian, endowed chairholder, Merton scholar along with everything else. Our paths were about to cross with a faculty member Larry identified as a world-renowned mathematician, “a brilliant mind.” So Larry addressed him in jovial fashion, “How are the numbers adding up today?” To which came the reply: “Oh, Larry, we don’t use numbers anymore.”

And trips past here with Griff, heading to and from the University Club for lunch, slowly walking, ambling and talking. Melancholy, often doleful, the gentle priest said “hello” to everyone we passed. There was a 9-11 Mass here, on the long quad between O’Shag and the Rock, a thrown-together memorial on the very day the airplanes struck. Out by the flagpole. A flagpole that another priest friend did not favor, questioning the appropriateness of a Catholic university’s nationalistic tendencies. He was a theologian, a Catholic Worker activist and social justice preacher. I always thought him one of the good guys; he actually saw Christ’s Gospel message as a way of life. When he left the priesthood and found himself abruptly in need of income, he smiled and said, with a twinkle in his eye, “Now I guess I get to practice what I’ve preached to all these students through the years.”

I cannot pass the law school without remembering Father Mike McCafferty. And Dave Link and Tex Dutile. It’s funny how buildings remind me of people and people remind me of goodness.

Griff and I would always stop at the post office for him to get his mail. It isn’t there anymore, its spot taken by the law school addition with its walkway arch. Nor is the indoor bus shelter there at the circle, back when vehicles drove in the opposite direction from today. And the University Club, where Otto Bird and Bob Leader were regular lunch partners, and the big, round Algonquin Table with its daily cast of characters. Classic, vintage, old-school Notre Dame. It’s gone too. The faces have dimmed some in my memory, the voices and laughter grown faint.

There are buildings now along my route to Eddy Street Commons that I have never entered. Some brand-new, all populated with eager minds doing important, serious, scholarly things. Research of unfathomable scope, detail and precision. It makes me feel like that sixth grader again: so much here beyond my comprehension. Matters of intellect and consequence. Frontier-stretching pursuits.

It is strange to walk a campus I’ve known so intimately, so close, and to stumble into unexpected walls, unfamiliar pockets, new construction blocking my path, making me go around. It can be a bit disorienting. Residence halls whose names I do not know. Affluent suburbs where there once were fields of grass. One vacant lot remains here now; it’s called the Irish Green.

I arrive for lunch with my own cloud of melancholy. But it cannot last. I am with a young alum whose affection for Notre Dame is fresh, real and buoyant. He’s happy to be working here, has dedicated his life to it. He loves the place and all is good. And so it is.

The walk back to work has a different mood. Life goes on. There’s no looking back. The Crossroads compilation is nearly complete, with broad sidewalks and tall, stately brick-and-mortar centers of learning and engagement. A direct route through Duncan Student Center — which is bustling and thriving, upscale and up-to-date — takes me through a happy marketplace that proclaims a new Notre Dame. I am happy to have a place in both.

It is not, I think, so much that we hold onto the past, but that the past holds on to us. And that’s a good thing. It brings a certain honor to the places we inhabit, and brings honor to those who will always inhabit us.