We all know how the story ends. Many of us know how the story goes. There’s the wintry arrival at the cabin by the lake, the cholera epidemic and other early hardships, and the devastating fire of 1879 — his faithful re-imagining of the university he founded and his mythical “too small a dream” speech.

Notre Dame is his legacy, and Rev. Edward F. Sorin, CSC, is the legend of Notre Dame proportions, the family character with enough dissonant dimensions to intrigue. 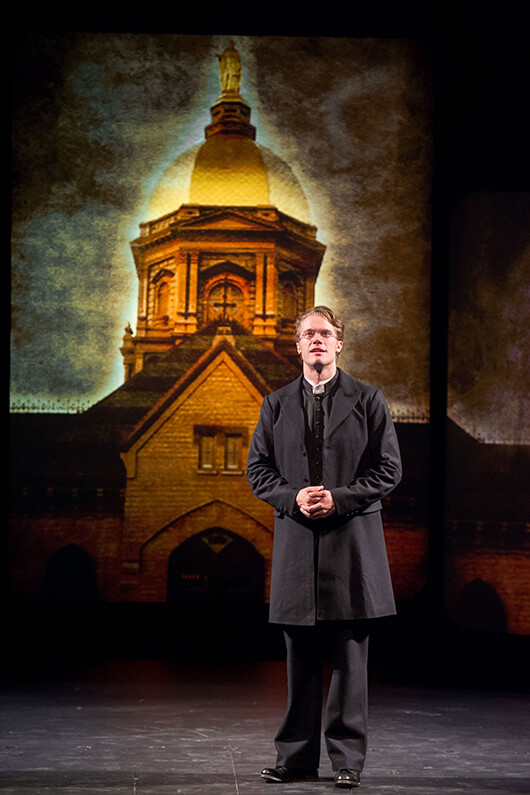 It works without the beard. Matthew Goodrich '09 as Father Edward Sorin, CSC. Photo by Matt Cashore '94.

So when Jim Small asked me — probably two years ago now — what I thought of his maybe putting together a Father Sorin one-act play to commemorate Notre Dame’s 175th anniversary, I gave him a hearty, “Sure.”

Jim Small heads up the communications team for the University’s development office, and they dug into the research, working with the Congregation of Holy Cross (especially Fathers Ralph Haag and Tom Blantz) and Elizabeth Hogan, a University archivist, to put facts to the myths.

I could see the one-man act in my head. I could envision the University patriarch and icon walking about the stage — long white beard and cassock — recounting the key events in his life. And great tales they are. A history that many Notre Dame people have lost track of.

But not necessarily compelling theater.

As Jim talked about his creation over time, I would provide friendly encouragement and little else. He asked me to read the script — Sorin in conversation with God — and the few suggestions I offered hardly merited further action. The script was words on paper then, and I said, “Nice.”

Jim told me about auditioning actors. He explained that he had enlisted the help of some alums — established pros with impressive theater credentials: the playwright Christina Telesca Gorman ’91, and Ryan Belock ’11, adept at enhancing live performance with multimedia backdrops. And Jim also mentioned he had recruited Patrick Vassel ’07 who’d been busy of late as the associate and supervising director of Hamilton: An American Musical.  A pretty good supporting cast. To which I said, “Cool.”

Jim said he had always expected to see the elderly, bearded Sorin on stage. Everyone else wanted a younger Sorin, to which I made a facial expression meant to convey wary puzzlement and said, “Hmm.”

Matthew Goodrich ’09, a young actor with some noteworthy theater credits got the part. “OK,” I said.

The final product of this vision, collaboration, creativity and high-powered know-how is “Sorin, A Notre Dame Story,” in which the University’s founder and his remarkable story come to life. Becomes real. And human. Compelling even. To which I can only say, “Bravo.”

Here are some reasons why.

Matthew Goodrich is very good. His Sorin becomes a real person, complete with a fading French accent, commanding the audience’s attention for the full 75 minutes as he talks to God, addresses the audience, ruminates on setbacks and questions his beliefs. It’s a persuasive performance, made poignant by his deliberations on whether or not his trials are mere tests of faith or signs from God that he should call it quits.

How many of us have not pondered that dilemma?

The depiction of Sorin as an immigrant dreamer inspired by the American spirit is Hamiltonian in its resonances and, by all accounts, true. Genuinely funny lines are sharply insightful and a surprising antidote to the play’s earnest pathos. Much of the humor is wittily insider-ish and the best lines needle modern-era targets.

The multimedia elements invigorate the experience, and the ending is downright moving — it will make most people feel good about being associated with the place and its history. It’s a quality production; a gem of Notre Dame storytelling.

Performances are scheduled on campus throughout the fall and then, Jim Small tells me, the show is going on the road through much of 2018, a kind of national tour with dates being scheduled now. To which I said, “Good. It should.”

People should see it.