The Carrot Barn is a busy produce market and country store that’s about as pleasant a place to eat lunch as any you might imagine. It’s pretty far from Grace Hall — about a four-hour flight from South Bend to Albany, New York, and a 40-minute drive west into the sweeping green hills along the Hudson — but I found myself there in August with Bill Jordan ’85, reporting on his work in solar energy for our winter issue. I’ve been contemplating the story that follows here ever since. 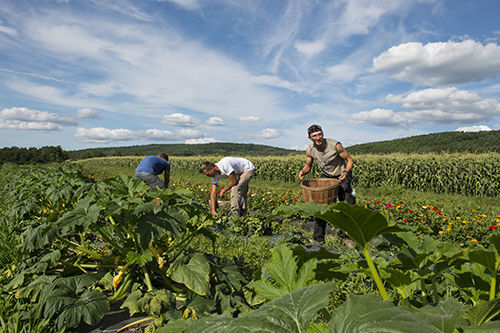 That afternoon, open bushels of russet potatoes and green peppers, zucchini and yellow beans graced the store’s pallet-box tables from front to back. Refrigerator cases neatly lined with locally produced milk and deli meats, eggs, yogurt and ice cream hummed from the wall opposite the lunch counter. There, we each bought an Apple Turkey, the Carrot Barn’s signature sandwich, and bottles of red plum juice and set them down at a table awash in the scents of fresh-cut flowers, plentiful and bundled for sale.

It’s hard to imagine the place as either a disaster recovery center or — in the blue skies and breezy heat of summer — the backdrop of a heartwarming Christmas tale, but four years before our visit, that’s what it became.

On August 28, 2011, Hurricane Irene forced its way up New York’s Hudson River and settled over the Schoharie Valley like a giant pail, pouring out 20 inches of rain and creating what the National Weather Service classified as 500-year flood conditions.

The creek that waters this breadbasket of the American Revolution rose 10 feet above its previous high, but the Carrot Barn and the adjacent packinghouse and greenhouses of Schoharie Valley Farms were spared. High on a knoll about a mile north of the deluged village of Schoharie, the store and restaurant became what its owner, Richard Ball, Bill Jordan’s business mentor and a farmer by trade, calls “a little oasis” amidst devastation, a place where evacuees could commiserate, get a cup of coffee or something to eat, use the restroom, recharge their phone, dry out.

Ball had spent a generation working with his wife, Sue, and their three children to convert his 250-acre farm from a wholesale carrot business into a fresh-market vegetable operation, of which the Carrot Barn was only the most public part. Today, the farm grows and the store sells 30 different vegetables, from snow peas to sweet corn, and 42 varieties of garlic alone. Customers come back later each year to buy their chrysanthemums in the fall and their poinsettias, Christmas trees and wreaths in December.

But in 2011, Irene washed almost everything away overnight. Ball lost most of his crops, but he could see before the rain stopped falling that his neighbors were losing everything. Their homes, their businesses, even their churches, were ruined.

After the floodwaters drained, Ball heard townspeople say the Schoharie they knew was finished. That was true, he says. But he knew too well about heartbreak and loss. In his case, cancer had taken his beloved Sue the previous November.

“I had come to grips with that notion that things would never be the same again,” he told Bill and me. “But it didn’t mean they couldn’t be good again.”

Some of the Carrot Barn refugees offered to help out around Ball’s farm while contemplating their own next moves, and “RB” as friends and family call him, salvaged enough produce before the end of harvest to keep his wholesale business going. It seemed everyone was looking for things to offer, little ways they could pitch in and heal the damage the floodwaters had done. “It really drove home a sense of community,” he said.

But when everything else seemed tenuous in that painful and uncertain year of 2011, at least one thing remained firm. RB was still in the relationship business.

It’s the core of Ball’s philosophy, a simple-seeming piece of advice he’s given to farmers for years, whether they’re adapting as he has to rapid changes in American agriculture or working with him now as the state’s agriculture commissioner to build an unprecedented Farm to School food program that’s bringing fresh produce into New York City’s public school cafeterias.

“We’re not in the food business,” RB said. “We’re in the relationship business. No matter how good you are putting a seed in the ground at the right time, at the right depth, if your customer doesn’t know who you are and how you do it and feel good about it, you’re spinning your wheels.”

Farmers today have a great opportunity, he added. People want to know who is growing their food and how they’re doing it. “It’s really about trust and the relationship.” And it may be just the thing that America’s rural communities need to turn around decades of lost population and cultural identity.

For Ball, the rescued harvest of 2011 was nothing compared to what happened next. As Christmas approached, he took a phone call from his pastor. With the town’s three churches so badly damaged, would he consider hosting Christmas Eve at the Carrot Barn?

Humbled, he agreed, and asked his staff to prepare for services. The whole town showed — Presbyterians, Catholics, Dutch Reformed — to celebrate the holy night together. The three churches had a history of working together at community events. Now they were praying together, on the night before Christmas, in the softened lights of Richard Ball’s barn.

By Christmas the following year, one church was restored, but many from its congregation attended both services – their own, and the Carrot Barn’s. They’ve hosted every year, RB said. “And we always will, as long as they like to do it.”

I didn’t ask Richard Ball whether he’s read his Dickens.

“Business!” Marley’s ghost screams at Ebenezer Scrooge in the opening stave of The Christmas Carol.

It didn’t really take a bad night in RB’s life to teach him that lesson, but things in Schoharie — though different — do look pretty good again. The Carrot Barn soon returned to selling Apple Turkeys and in time, RB married Shirley, Sue’s younger sister. “Which is just, in my own case, proof that a miracle can happen to the same guy twice.”