Grant Mudge obviously hadn’t rehearsed his lines. As our group peeked over the fourth wall of the Notre Dame Shakespeare Festival’s production of The Winter’s Tale, technical director Ken Cole asked him to repeat something he had said to an earlier tour. Mudge had no memory of it.

Something about Hamlet, Cole reminded him, and the relationship between the performer and the audience?

Then Mudge remembered, noting by way of preface the blurred roles of practitioners — actors, directors, designers — and academics in staging a Shakespeare play on a university campus. They even coined a word for it — pracademic — which was very Shakespearean of them. 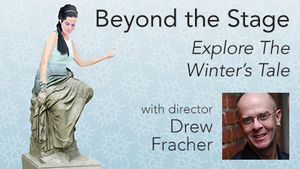 We were standing at center stage with a performer’s perspective on the Decio Theatre at the DeBartolo Performing Arts Center. The empty seats were faintly lit, our view of them fogged by the overhead stage lights. Mudge, the Shakespeare Festival’s artistic director, was explaining the depth of consideration that pracademics put into even seemingly basic matters like levels of house illumination.

“How much light goes on the audience? Too much, and [you can’t perceive] that subtle lighting change or effect . . . because the light is kind of in your face. Not enough, and the actor can’t find you and he’s sort of generally addressing you over your head.”

Take the character Hamlet. When you and the speechifying Prince of Denmark feel like you’re looking each other in the eye, the encounter takes on an intimacy and an urgency that elevates the experience.

“If Hamlet can see you in the audience when he is delivering those big soliloquies and can say, ‘Who plucks my beard off, blows it in my face, who does me this?’ And he’s right with you? Boy, that’s engagement.”

Creating that engagement requires a swarm of necessarily invisible effort. The Shakespeare Festival’s “Beyond the Stage” series early this month shed light on that work for The Winter’s Tale, which runs through August 30. Director Drew Fracher and Wendy Robie, who plays Paulina, a courageous defender of her queen’s honor in the face of her jealous king, discussed their processes for bringing The Bard’s words to life. Ken Cole revealed secrets of a set that takes audiences from orderly Sicilia into wild Bohemia. And costume designer Christine Turbitt gave fresh meaning to the term source material.

Months in advance, often from afar, discussions begin among designers and actors, honing the director’s vision into an artistic rendering of the play. For this production of The Winter’s Tale, Fracher envisioned the kingdoms of Sicilia and Bohemia as temperamental and geographical opposites.

Sicilia is sleek, bright, confined and confining. A place, as Fracher expressed it, where there’s a lot of surveillance, a description that instantly gave Robie’s Paulina a more rigid, alert presence.

Bohemia is agrarian, wooded, free and freeing. Its trees — made from chicken wire, plywood, brown paper, glue “and a lot of skill by our scenic artists and our staff,” Cole said — looked real even close up.

Inside the costume shop, mannequins were adorned with the garments sewn from sketches hanging around the room. Turbitt said she developed with Fracher “a visual concept that coincides with his philosophical concept about the show.”

For The Winter’s Tale, that meant “neo-Victorian with a skosh of Goth” in the King of Sicilia’s dark, heavy wardrobe. “This,” Turbitt said, gesturing toward clothes lighter in weight and color, “is the King of Bohemia and it looks a lot like India, because that’s where I got these things.”

Other costumes were made just for this play, but wherever they came from, they give the performers a deeper sense of their characters — Robie said she feels smarter after every fitting — just as the scenery helps transport them to a specific time and place.

Those collaborations produce an illusion that conceals their craft in the service of the story. When I saw the play over the weekend, I wasn’t thinking about what I had seen backstage, but I felt more attuned to the details because of it, the costumes more distinct, the scenery more vivid, the characters more real.

Rather than breaking the spell like magicians explaining a trick, the glimpse into the heart of the cast and crew’s artistry made my view from the audience that much clearer.