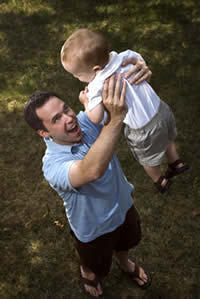 Jeff Spoonhower, a 1999 Notre Dame graduate, designs video games, but his son doesn’t play them. That’s because Sean is a toddler. Even as Sean’s coordination improves, he’ll have to wait to play the cool stuff his father has helped create—including Saints Row, Syphon Filter: Logan’s Shadow and the soon-to-be-released Resistance: Retribution.

“People think video games are for children, but that’s not really true anymore,” Spoonhower says, adding that most of the gaming market is between the ages of 18 and 40. And Spoonhower intends, like a good parent, to pay attention to the parental guide ratings of the games.

“A lot of popular genres right now are centered around shooting in one form or another,” he says. “I think that’s going to wear thin eventually.” In fact, he says, the recent games he’s worked on involve more stealth action than point-and-shoot.

The video game industry is in its infancy, Spoonhower points out, and game designers are still learning “how to tell stories through interactive media.”

Working on stories is what the former ND film student, who earned an MFA in computer animation from the Rochester (New York) Institute of Technology, enjoys the most. In the gaming world, it’s called cinematics—"the movies that play during games." Cinematic work, he says, is like directing, taking a script and “making that come to life,” using virtual actors and a computer.

Although he has worked on animated feature films and hopes to do more of them, the 31-year-old says he mostly fell into doing video games. “I saw a lot of opportunity in that field.” His timing was good. In 2002, Spoonhower landed a job with Electronic Arts, working on sports games. From there he moved to action-adventure games with THQ and then to Day 1 Studios.

He also did freelance projects and discovered that he enjoyed working from home, collaborating with a small group of independent artists and producers.

Earlier this year, he decided it was time to make the freelance move permanent. With his younger brother, Paul, he opened the production company Scratch Image. “It was a great combination of our talents,” he says; “mine, the creative side, and Paul’s the management and business development side.”

The two, while close, are physically separated: Jeff lives in a suburb of Cincinnati, Ohio, and Paul in Washington, D.C. The brothers talk daily, Spoonhower says, using a free Internet phone program to keep overhead low.

Gamers can have a blast with the end result of Spoonhower’s creations. “I’m proud of everything I’ve worked on,” he says. And for Spoonhower, “work” is the operative word.

“It’s a stressful job, and it’s lots of tight deadlines and lots of pressure to do well.” His cinematic work on Logan’s Shadow, for instance, required seven months of 50-to-60-hour weeks.

Even so, “I can’t see myself doing anything else. I like doing things that make people happy and that they enjoy.”

Photo of Jeff Spoonhower and his son Sean by Photophil.