Editor’s note: Molly Seidel ’16 finished her college career with four national championships, logging a lot of miles along the way, but she had never run a marathon until this past Saturday, February 29, when her second-place finish earned her a spot on the U.S. Olympic team. Our Magazine Classic from 2016 looks back at the college career of an athlete who always wanted to run and run and run . . . 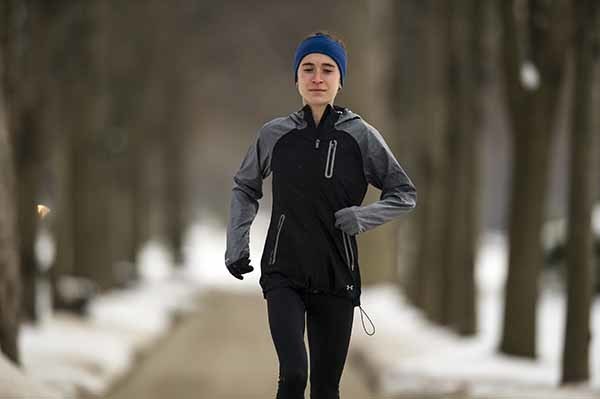 Molly Seidel came to college cursed. Not that the Notre Dame senior ever believed a jinx controlled her destiny, but anyone less dogged in pursuit of improvement — which must include pretty much everyone else — might have started to question fate.

The Hartland, Wisconsin, resident was saddled with the Foot Locker high school cross-country national championship. No female winner of that title had ever become the NCAA cross-country champion. Hence the curse, a superstition she never entertained even as illness and injury knocked her far back in the national pack.

At the end of her freshman cross-country season in 2012, Seidel finished 217th at nationals, a disappointment that sounds almost superhuman when you learn that she was coughing up blood at the starting line. She had been sick for months, a mysterious illness that by then had been traced to mold in her dorm room.

After that had been resolved and her symptoms relieved, stress fractures interfered with her progress as a sophomore. Those injuries were perhaps symptomatic of her hurry to make up for lost time, and she suffered en route to 171st place at the NCAA championships.

Those first two years left her physically and emotionally “broken down,” Seidel says, but the experience opened her mind to a new approach. She had to learn patience and the importance of rest and recovery, even when her internal odometer burned to log more miles.

Her training regimen has grown more nuanced and technical since, but Matt Sparks, her Notre Dame coach, says, “She’s still running 80-95 miles a week. She’d like to run more if you asked her.” One week, Seidel admits, she “accidentally” ran 15 or 20 miles more than they had scheduled.

“The biggest part of his job is probably saving me from myself,” she says, “so I don’t run 110 miles and my legs fall off.”

Sparks arrived just before Seidel’s junior year. Like a driver’s ed teacher, his job was to apply the brakes for Seidel before she crashed. In the process, she began to learn how to shift gears and even when to hit the brakes, however inclined she might be to roll through stop signs.

And she started to go faster. Like, All-American fast in cross-country as a junior and then, as if out of nowhere, national championship fast in track.

Last June, Seidel showed up at the NCAA 10,000-meter championship as one of a handful of women who figured to finish somewhere behind the consensus top two, Boise State’s Emma Bates of Boise State and Dominique Scott of Arkansas.

With about a mile left in the 6.2-mile race, Bates bolted, accelerating away from the pack. Among the trailing crowd, Seidel alone decided to go after her.

“I had been against the rail,” Seidel says. “I felt bad I actually knocked a girl out of the way to get out of the pack.”

Bates paid for her early burst, falling back to 10th place. Seidel surged ahead with 800 meters to go and finished in 33:18, beating Scott by 7 seconds to become the Notre Dame women’s track program’s first-ever national champion.

The curse, though, still technically held. It applied to cross-country, the fall sport. Her spring track title and All-America status from her junior cross-country season identified her as one of the national pacesetters as a senior.

She wore the burden lightly, winning at the Atlantic Coast Conference and Great Lakes Regional meets. Then, about a week before the November NCAAs, Seidel injured her knee in a bike accident.

As it turned out, the damage was mostly mental, forcing her to limit her miles that week to about 30. “Sparks helped keep me kind of calm about it,” she says. “I was going a little bit crazy.”

He assured Seidel that her preparation had been banked in the weeks and months before, that nothing she did, or didn’t do, on the days leading up to the race would negate that effort. And he was right: She comfortably finished the 6K in 19:28 — 5 seconds ahead of the competition.

Now a two-time national champion competing in her final college semester, “She still somehow finds a way to keep a chip on her shoulder,” Sparks says, as Seidel casts off accomplishments to chase new ones.

Sparks picks up the thought. “One second off the facility record, so she always finds something to push her to be a little better.”

If Seidel needed the external motivation, the months ahead offer plenty. Beyond the college track season and the opportunity for a repeat championship, she and Sparks have been developing a training plan with the July Olympic Trials in mind.

Her evolution as a runner has taught her that she can’t just barrel ahead to the next achievement. Seidel embraces the process now, a long and arduous one by any measure with many miles to go before she rests — just not as many as she would like.