The August 24th death at age 81 of Father Don McNeill, CSC, ’58, founding director of Notre Dame’s Center for Social Concerns, closed a life that for a half-century showered great gifts on Notre Dame and far beyond. His wake at Moreau Seminary and funeral Mass in the Basilica of the Sacred Heart gathered hundreds to celebrate Padre Don’s rich legacy and inspiration.

The priest’s father and namesake hosted the longest-running single-hosted show in network history, Don McNeill’s Breakfast Club, so his son arrived at Notre Dame a household name. On campus, Don played basketball and was elected class president, and after a stint in the Army he joined the Congregation of Holy Cross. Education in Rome and then Princeton followed, interspersed by seminars with such luminaries as Father Henri Nouwen and Viktor Frankl. 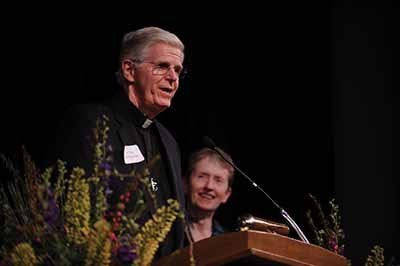 The priest returned to campus in 1971, teaching theology and working closely with students involved in the Community for the International Lay Apostolate (CILA). Guided by their energy, he helped found the Center for Experiential Learning, sensing the need to make justice something Notre Dame students learned through practice.

When the small WNDU television station building — later the campus radio station — became available, Don helped bring together CILA, his experiential learning center and the Office of Volunteer Services to house in the empty space the Center for Social Concerns (CSC), which opened in 1983. Called to act by students seeking a visible commitment to education for justice, Father Ted Hesburgh embraced the new role for the coveted site.

And the rest is history. Notre Dame, led by innovators like Father Don, has through the center pioneered advances in service-learning (later called community-based learning, now usually labeled engaged learning and joined with research), guided by the Catholic social tradition. The Center for Social Concerns, Father Don’s most visible legacy, is now housed in Geddes Hall, which stands on the original site. It comprises around 40 staff and faculty who annually engage several thousand students, communities near and far, and many faculty in learning and research in pursuit of the common good.

One of Don’s favorite Scripture texts was: You have been told, O mortal, what is good, and what the LORD requires of you: Only to act justly, to love tenderly, and to walk humbly with your God (Micah 6:8). At his wake and funeral, attendees remembered and celebrated Don’s commitment to justice, his merciful loving and his humble walk with God.

Padre Don’s view of justice was shaped by the radical call of the Gospel embodied in the Beatitudes, the Catholic social tradition and the deepest instincts of Holy Cross. His zeal in pursuit of justice was nurtured by a sense of responsibility for using his gifts well, and also by listening carefully, both to friends — of whom he had many — as well as to those who suffered the lack of justice in their lives and who thirsted for something better. Don let his own heart hurt with them and spurred his own intellect to pursue solutions with them for their plight, inviting colleagues and students to do the same. His passion for justice also at times led to strained friendships, something unavoidable in a complex and powerful setting like Notre Dame.

Despite the tensions he faced, Don’s zeal was always motivated by love. He enjoyed giving voice to the voiceless out of love for them. Even when challenging others, Don did so lovingly so they could walk the path of self-discovery through self-transcendence and self-gift. His was a gentle but persistent spirit.

Finally, Father Don walked humbly with God. Mindful of his gifts, he also keenly knew his sinfulness, which he listened to carefully. His own perceptions of unworthiness (a gift of the Holy Spirit) at times generated tension with those gifts. For instance, when he had a new vision or insight, he sought to share it eagerly, almost impatiently, and yet at the same time — and with equal earnestness — he wanted to listen to others, mindful of his limitations. That is a narrow path indeed, to burn with conviction and also a deep aspiration to be open to others. Humility is a complex balance, especially for someone of many talents. After all, how do we join together Jesus’ call to deny ourselves and carry our cross, the urgings of our own heart’s desires and the need to follow our gifts? Humility needs all three in balance, and Don walked that balancing act all his life.

In the end, Don’s easy and infectious laughter — an unselfconsciousness he so enjoyed and which lit up his whole being — signaled his humility. It was laughter that invited others into a heart that was just, loving and humble.