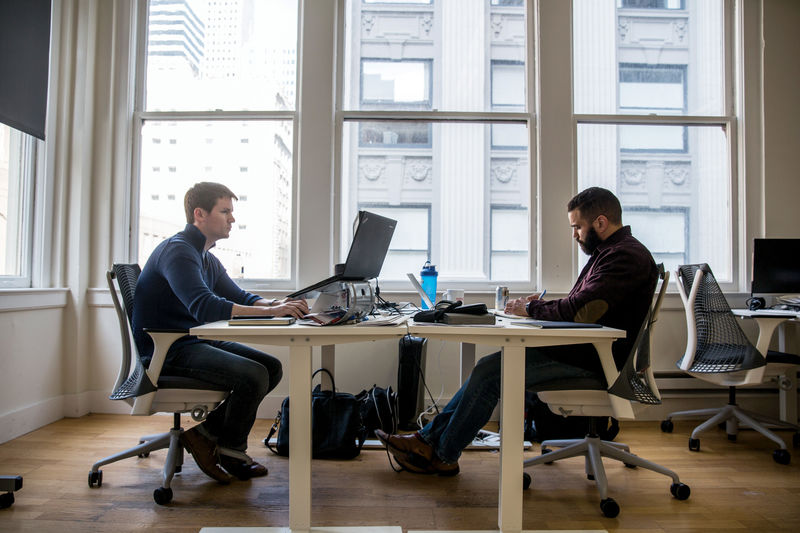 Adam Hansmann’s first break as an entrepreneur came in 2007 when he was a Notre Dame sophomore. He lived in Morrissey Hall and was tired of having to rely on The Huddle and his Domer Dollars for food.

His parents had let him bring their Mercury Villager minivan to campus, so Hansmann ’10 and his friend Jake Jeffrey ’10 started making Sam’s Club runs for items like bottled water and soda.

Friends, then friends of friends, would ask the two to pick up a few things. So Hansmann and Jeffrey started charging a premium for the delivery, and Dorm Drinks was born.

By 2009, the business had expanded beyond soft drinks to snacks and candy delivery, serving 300 customers and generating $10,000 in sales.

“It’s given me an entrepreneurial spirit,” Hansmann told me in December 2009, our senior year, for a profile in The Observer.

Now the former gofer is busy growing his latest project. The Athletic, which he co-founded with Alex Mather in 2016, is a subscription-based sports news outlet known for its detailed stories about everything from the journey of Notre Dame’s walk-on kicker to the Slovakian upbringing of a popular Chicago Blackhawks player.

Unlike most other digital-only news sites, The Athletic takes no advertising. It has about 600,000 subscribers who pay around $60 per year. To date, the company has raised roughly $70 million in venture capital.

Hansmann, the chief operating officer, doesn’t come from a journalism background. But he did grow up tearing through the sports section of the Cincinnati Enquirer each morning for updates on his favorite teams — the Reds, Bengals and Bearcats. “That was just how I got all my information,” he says.

He kept up with the Enquirer’s website at Notre Dame, where he studied finance when he wasn’t too busy with Dorm Drinks. Soon he was selected to participate in the business school’s Applied Investment Management (AIM) program, a rigorous course in which top finance students manage a live portfolio of over $10 million and take classes from the University’s chief investment officer, Scott Malpass ’84, ’86MBA, and others.

Hansmann credits the program with helping him land his first full-time job at the consulting firm McKinsey & Company, which he refers to as his “finishing school.” He spent two years at McKinsey in New York, then moved to San Francisco and the private equity firm Calera Capital. Two years later he landed a job at Strava, a subscription-based fitness app for endurance athletes. That’s where he met Mather, a Philadelphia native as passionate about his hometown sports as Hansmann is.

The two “expat fans,” says Hansmann, griped about the lack of high-quality digital news on their teams. The problem was only getting worse as newspapers cut staff, further eroding the quality of their products.

“We looked at that and said there are two possible outcomes. Somebody’s going to start to rebuild around quality, and we believe subscription is the way to execute that, or it’ll go to zero and basically we’ll just be left with memes and gifs and highlights on Instagram.

Thus The Athletic was born as many business ventures are: in an attempt to fill a void. In Hansmann’s and Mather’s case, that meant figuring out a way to monetize first-rate digital sports journalism — inside information and analysis from reporters who have the sources and insights that only come from experience on the beat.

They left Strava together in mid-2015, and within months The Athletic launched with coverage of Chicago sports, backed mostly by their personal savings.

Investors weren’t readily convinced at first. “I put my career, my professional life, my reputation, my ego . . . everything at risk to try something that pretty much everyone at the time said didn’t have much of a chance,” Hansmann says.

To get the site up and running in its early days, he had to handle more than its business operations. “I remember him even putting together some of the graphs and charts for the articles,” says his wife, Clarissa Hansmann ’11, a project manager for Ken Linsteadt Architects in San Francisco.

Slowly things started to fall into place. The pair found their first investor in Michael Horvath, their former boss at Strava. Precursor Ventures, a connection through fellow entrepreneur Chris Kelly ’05, wrote The Athletic its first big check — $200,000 — in the spring of 2016. By summer, Hansmann and Mather were accepted into Y Combinator, essentially a startup boot camp, before raising another $2.1 million that fall.

In Chicago, the partners learned where to focus their efforts: hiring writers full-time to provide in-depth sports reporting. One high-profile early hire was James Mirtle, formerly a hockey writer at The Globe and Mail in Toronto, site of The Athletic’s second market launch. A few months later, the service added Cleveland with another experienced reporter, Jason Lloyd, who’d been covering NBA star LeBron James for years at the Akron Beacon Journal.

The summer of 2017, Hansmann says, is when The Athletic “really started to accelerate” toward its current presence — 47 markets with over 300 full-time staff in the United States and Canada. The website made its European debut in the United Kingdom this year with plans for about 50 full-time staff covering Premier League soccer and other sports. And Hansmann hasn’t written off advertising — as long as it doesn’t interfere with the reader experience, which he considers sacred.

During the acceleration, the company recruited George Dohrmann ’95 as a senior editor. Before spending nearly 15 years at Sports Illustrated, Dohrmann had won a Pulitzer Prize in 2000 for a series of stories in the St. Paul Pioneer Press that uncovered academic fraud within the University of Minnesota men’s basketball program. At The Athletic, he leads Ink, the company’s longform section.

“Readers want depth and good reporting and good writing. Nobody else was really willing to bet on that,” Dohrmann says. At a time when sports journalists are pressured to produce clickbait stories, Dohrmann says, those who come to The Athletic seem grateful for the opportunity to write with nuance and complexity.

Working with former ESPN college basketball writer Dana O’Neil, Dohrmann sent her a thoroughgoing edit of a piece, to which, he says, she responded gratefully: “You know how long it’s been since someone gave me a really intense line edit of a story?”

O’Neil was one of about 100 ESPN journalists who lost their jobs in a 2017 layoff. Another was Matt Fortuna, who had covered Notre Dame football for six years and now handles national college football for The Athletic.

“That really opened up some recruiting lanes for us,” Hansmann says of the ESPN restructuring. Others continue to open as the industry churns and publishers trim their newsrooms. These days, The Athletic is building its own talent pipeline with an internship program.

“He always said he wanted to break the mold and start his own company,” Clarissa Hansmann says, “and now here he is, with one of the fastest growing companies in sports media.”

Katherine Peralta, a former intern with this magazine, is a journalist in Charlotte, North Carolina.