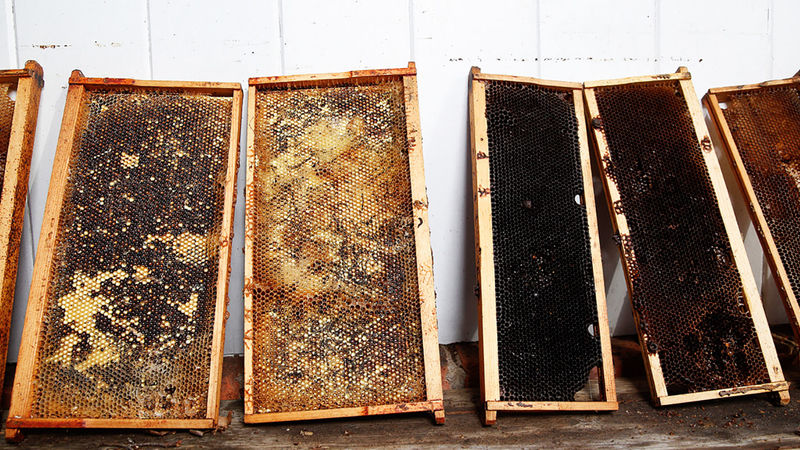 As a kid on visits to Idaho, John Fry ’93 marveled at the stores of honey arrayed on his grandmother’s kitchen shelves. Delicious and nutritious, the display also served as a prompt for recitations of the family’s decades-earlier foray into beekeeping and their first, abundant harvest. 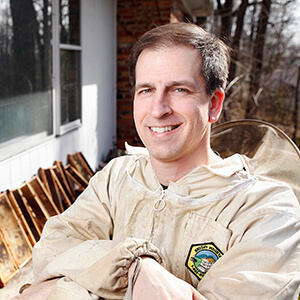 Back in the 1950s, honeybees had colonized an entire wall of the family home. By the time Fry’s grandfather decided it was time for them to go, the bees were a regular presence in his children’s bedroom. To speed the eviction, he put his wife’s new Hoover to the task. “She was furious,” says Fry. “She’d only had the thing a week, and of course you can’t run wax and honey through a vacuum.”

An analyst with the U.S. International Trade Commission in Washington, D.C., Fry started keeping bees in April 2010 to guarantee access to the chemical-free elixir he’d enjoyed as a kid in rural Idaho. Unlike his grandparents’ storied housemates, Fry’s apiary is outdoors — on a wooded, half-acre lot in Arlington, Virginia. Visible from his front door, the 10 hives can produce as much as 500 pounds of honey in a year. Demand for the sticky golden syrup he bottles far outstrips supply. “I could sell four or five times what I harvest,” says Fry. “Easily.”

In addition to honey, Fry sells “nucs,” starter colonies that are a byproduct of his efforts to boost the health of his colonies. At first, says the beekeeper, he purchased queen bees from Georgia, but at least half of his colonies died each winter. In recent years, Fry has overhauled his management approach. He supports fellow D.C.-area beekeepers by selling them mature queens that have proven themselves winter-hardy and, by raising their replacements himself, selects for genes suited to ecological conditions in the mid-Atlantic. The process has the added benefit of disrupting the lifecycle of the aptly named Varroa destructor, a bloodsucking mite that preys on honeybees throughout the United States and can be hard to control without synthetic pesticides.

If he produces more nucs than he can sell, Fry offers the surplus at a steep discount through the local 4-H beekeeping club. “There are a lot of very excited kids learning on the fly,” he says. “It’s a lot of fun to mentor them.” 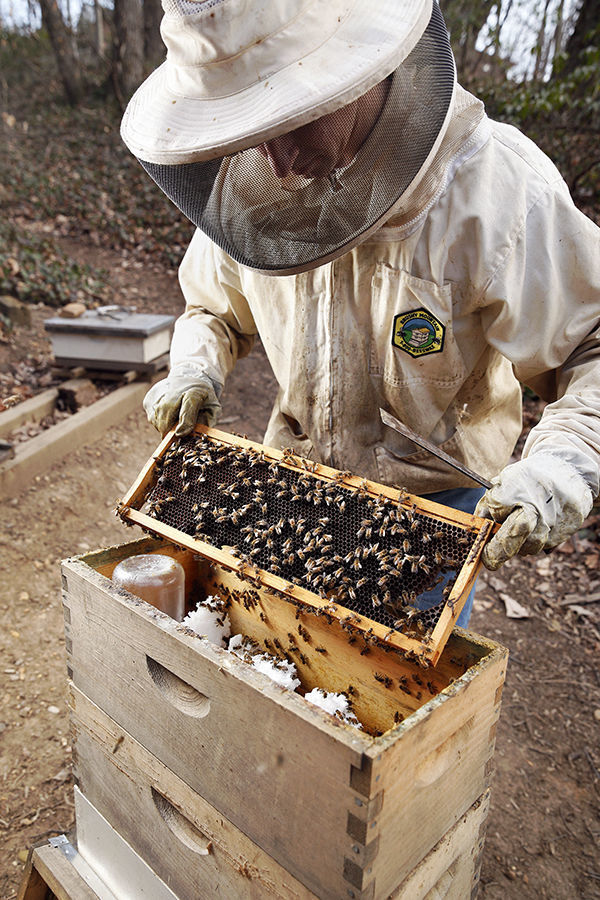 Closer to home, the apiary has supplied a hands-on financial literacy curriculum. His wife, Amy Miller Fry ’95, and daughters produce thousands of tubes of lip balm, as well as lotions and other skincare products, with spent wax harvested from the hives. Since they do the work, they keep the cash. “As my kids have gotten more into it and taken ownership, they’ve learned how to make money, what sells and what doesn’t,” says Fry. Using the entrepreneurial skills she gained creating cosmetics, his older daughter has launched a swim clinic, renting pool time and doing all of her own marketing. “I’m filing returns for everyone now,” boasts the proud papa, who collects from the older kids each year at tax time.

With three kids at home and one in college, the certified public accountant has made financial viability a cornerstone of his ecologically managed venture. Between the costs of hives and equipment, Fry estimates that even the most casual beekeeper shells out between $500 and $1,000 annually to maintain just one colony. “There are a lot of hobbyists who love the environment,” he says, “but I think they don’t realize that as soon as they retire or they’re unable to support their beekeeping habit with another job, the whole thing is going to go south, quick.”

Fry accounts for every penny he spends, as well as his own labor, and prices products — marketed under his nostalgic Victory Honey label — accordingly. He doesn’t dawdle in the bee yard and pays himself only the hourly federal minimum wage plus $300 worth of honey each year. By insisting on the financial viability of Victory Honey, Fry hopes to boost the prospects of all urban beekeepers. “I want more people in this business, and they won’t if they can’t make money,” he says. “I want it to go beyond people who love the bees and can lose cash doing it.”

Beginning farmer Sharon Tregaskis reports on healthcare and the environment; with her partner, she operates Tree Gate Farm, a small vegetable and fruit operation in New York’s Finger Lakes Region.