So two guys walk into a bar.

The first, Jeffery “The Natural” Stephens ’07, is a black lawyer from Chicago’s South Side. He’s a few inches over 6 feet, all stylish denim with a black flatbrim and a huge pair of Super flattop sunglasses with gold sides. His smile reveals a charismatic Michael Strahan gap between his two front teeth. 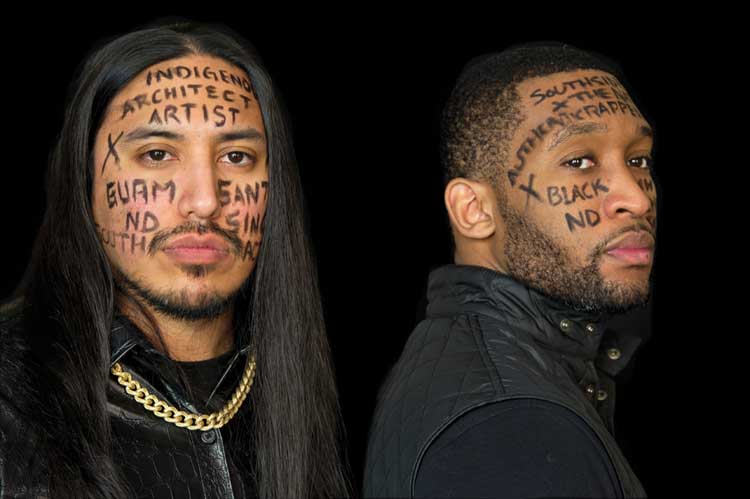 The second guy through the door is Lawrence Santiago, a Coushatta Native American architect who grew up in Guam and Louisiana, and transferred to the University of Colorado after his fourth year in Notre Dame’s architecture program. Santiago is wearing a black wool coat and a black wool hat, out of which streams straight black hair that flows past his shoulders. He’s wearing the same sunglasses as Stephens, sunglasses that don’t hide his face so much as amplify his cheekbones.

Most of the time, Santiago and Stephens are professionals known for their meticulousness and work ethic. But come nighttime, when the architect and the lawyer don their black Super sunglasses, they become a rock singer and a rapper. Together they are Santiago x The Natural. The “x” is pronounced “times.” And with their musical powers combined, the rocker/architect times the rapper/lawyer are rising fast into the national spotlight.

In the late summer of 2012, Santiago walked away from his successful architectural career in Los Angeles and joined Stephens in Chicago to pursue their music together full time.

“I was at a point where I want this to be real, instead of kind of a side thing,” Santiago says. “I want to give Jeff a reason to kind of hit pause on his law career and go full time with music.”

When “we were getting our advanced degrees, we were about to see the curtains close on music,” Stephens says. “Then it started like, ‘Wow. We’re not that old. We haven’t gone too deep in our professional lives. We can do music.’”

They created Santiago x The Natural in 2011 and earned popular and commercial success even before Santiago moved to Chicago. Red Eye and the Chicago Tribune hailed them as one of Chicago’s top unsigned artists of 2012. They are performing in Chicago on April 13 with popular rapper Talib Kweli, whom Santiago calls “one of the, if not the, best lyricists in hip-hop history.” ESPN licensed their song “Warriors” for the official BCS National Championship playlist, and Friday Night Fights boxing — impressive endorsements for such a new group.

Yet Santiago and Stephens have always stood out in a crowd, especially at Notre Dame, where they first started collaborating in 2003.

Santiago, then a fourth-year architecture student, had renovated his fourth-floor single in Zahm Hall into a recording studio for his rock band, Station One. Stephens, a freshman living in Keenan, approached Santiago in North Dining Hall with a request to use the studio. Santiago blew him off.

But Stephens persisted, and one of his mix-tapes found its way to Santiago’s ears. Where his request had failed, his rap succeded. 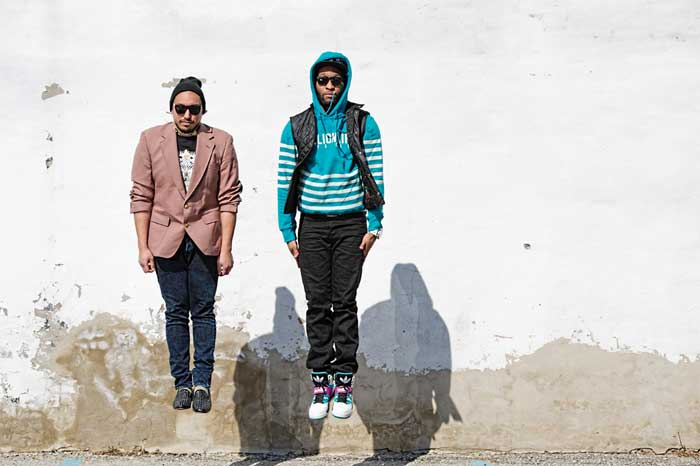 So the two began recording together, with Santiago writing songs and instrumental tracks that Stephens rapped over. Working together and creating music was their way of connecting with their Notre Dame classmates, most of whom were not black or Native American.

Notre Dame “was a culture shock as far as the economics, the race, and you know, not being as cool as you, Lawrence,” quips Stephens, who grew up in the Ida B. Wells projects and Englewood area in Chicago and attended an almost entirely black all-boys high school, Hales Franciscan. “But I like to say Notre Dame is my Disney World. Because you got all this stuff going on in the hood, and all this stuff going on in the family — [Notre Dame] was like a paradise.”

So they bridged the cultural gap as any musician would: They performed. Then, together, they got really, really popular.

“The blending of the two created a following so that no matter where they were performing, students were following them,” says Iris Outlaw ’90MSA, Notre Dame’s director of Multicultural Student Programs and Services. Outlaw worked with Santiago and Stephens when they served as diversity educators, encouraging their fellow students to attend such cultural events as Black Images and Latin Expressions.

“Jeff was pretty much an instant celebrity at ND, especially after his first Keenan Revue,” says Matt Haggerty ’07, Stephens’ roommate, about the rapper’s appearance in the dorm’s yearly variety show. “I was amazed at how he seemed to know everybody.”

Father Dan Parrish, CSC, ’03M.Div., ’08MNA, rector of Zahm Hall when Santiago lived there, says Santiago “looked at the world — his studies, but even the broader world — in terms of possibility.”

Santiago and Stephens continued their collaboration while earning a master’s in architecture from USC and a law degree from Washington University in St. Louis, respectively. In September 2011, Santiago composed a video featuring some of their songs. “Warriors,” which features a rap reference to Knute Rockne, quickly spread through the Notre Dame community.

John Arlotta ’71, owner of the Minnesota Swarm professional lacrosse team, discovered the video and invited them to perform “Warriors” at a game last April. A Chicago law bulletin article about Stephens then caught the attention of a news producer at WGN Chicago, who featured Santiago x The Natural in a TV spot broadcast nationwide. They returned to Notre Dame in September to perform “Warriors” for cheering crowds of students and fans at the pep rally before the Michigan game — and the song is now available through iTunes.

“It’s a snowball effect, but it was all sparked by Notre Dame connections,” Santiago says. “People wanting to help us out, relating to our ‘this is our last hurrah’ story. . . . Everybody — whether they’re CEOs or law firm partners — they’re all pushing us towards the music.”

In the summer of 2012, they built on the success of “Warriors” with a video for their newest single, “Got A Hold of Me.” Together with Randy Santiago ’08, Lawrence’s brother who helps mix the music, the duo produced the song and music video. On the surface, “Got A Hold of Me” is Santiago and Stephens voicing their frustration with professional life. Stephens raps: “I’m sick and tired of bein’ tied to a desk / A three-piece with a tie and a vest / Six figures couldn’t buy happiness / So right now I’m willing to die for success.”

“I’ve done all this stuff in this other life that I’ve been living for other people,” says Stephens. “I really want to be successful in music.”

“Got A Hold of Me” also describes the subtle thrill of their obsession with making music, of music’s hold on them. Songwriting, they admit, can be a grind. But they do it, bouncing lyrics and riffs off each other, sometimes at 3 a.m. Now they’re constantly crafting anywhere from five to 10 songs simultaneously as they prepare for a new album, a record deal and a summer of live shows, including, maybe, Lollapalooza.

“We’re out here trying to make it!” Stephens says. “What Native American and black rapper” — “and architect and lawyer,” Santiago adds — “do you know that’s doing this kind of stuff?”

Santiago x The Natural is a musical work in progress. But there’s nothing Santiago and Stephens would rather be doing when they don black sunglasses with gold on the sides.

Michael Rodio, who was this magazine’s spring 2012 intern, writes for the Daily Domer, a Notre Dame Development Office website. Contact him at mrodio@nd.edu.