It’s 10:30 on a Tuesday night, and a couple hundred students are waiting patiently to meet with Dr. Paul Farmer. The line snakes through the halls of Notre Dame’s Hesburgh Center for International Studies and spills into the building’s atrium.

After speaking to some 400 people about the Ebola crisis, its devastating impact in West Africa, and the work to strengthen health systems in Liberia and Sierra Leone, the global health specialist has now been talking with students one-on-one for almost two hours. 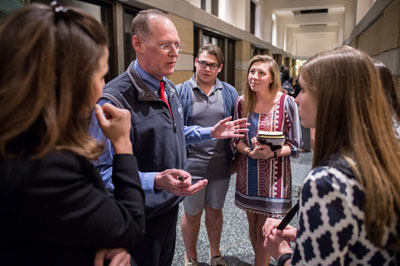 Many students bring him things to sign, including Farmer’s own books — or tattered copies of Tracy Kidder’s 2003 bestseller Mountain Beyond Mountains: The Quest of Dr. Paul Farmer, a Man Who Would Cure the World.

Others offer their program for the evening’s event, “Taking up the Challenge of Poverty: Why Accompaniment Matters.” One student brings her 2016 Notre Dame yearbook, another her statistics textbook. Farmer signs them all. He is as close as it gets to a rock star in the global health world.

Before long the standing bothers Farmer’s leg, injured when the doctor was hit by a car several years ago. Rather than cut short his availability, he asks for a chair for himself and another for the students. A colleague suggests that if the students sit down it will take even longer to get through the rest of the line.

“If they don’t sit down,” Farmer replies, “they’ll have to bend down to talk to me, and I don’t want that.”

The second chair arrives. Sarah Stubbs, a senior biology major and international development studies minor, talks about her passion for global health, and the inspiration she finds in the work of Partners In Health (PIH), the global health organization Farmer helped found.

She asks him to sign two copies of In the Company of the Poor: Conversations with Dr. Paul Farmer and Fr. Gustavo Gutierrez. The book is based on a series of dialogues, hosted by the Kellogg Institute five years ago, that the Harvard Medical School professor conducted at Notre Dame with the Peruvian priest who is widely regarded as the father of liberation theology.

The relationship between the two men is one of deep admiration. Farmer now makes a point of seeing Father Gustavo during each visit to Notre Dame, and he describes the huge footprint of Gutierrez’s thinking in his own work, especially regarding the preferential option for the poor: the idea that Christians must give the well-being of the poor and powerless precedence above other considerations in all that they do. It has become a foundational concept in Catholic social teaching.

Between signing books and getting his photo taken with students, Farmer and the students talk of the challenges of working in situations without necessary resources, the joys of working to build functional health systems and, despite the hardships, the reasons why global health is life-giving work.

Matt Hing ’15 stands toward the back of the line. After finishing his degree in Spanish and peace studies, he is spending the year in Mexico with PIH’s sister organization, Compañeros en Salud. Through a Kellogg International Development Fellowship, he is working on a program to strengthen rural community health workers in Chiapas, Mexico’s poorest state.

Hing, who plans to go to medical school, says his work with PIH has helped him see the preferential option for the poor put into practice.

“Meeting Paul felt like meeting an old friend,” he would later say. “And I think that demonstrates a lot about him — over the years, he has maintained the same humility that marks all of Partners In Health’s work.”

I admit that I am not an objective reporter on these proceedings. I have known Paul Farmer for more than two decades, and I’ve seen his transformational work firsthand in Mexico, Peru and Haiti. I sit on the PIH board and students in my classes, like Matt and Sarah, have done projects with PIH.

I’m delighted now to be working with him on a new book project, the occasion for Farmer’s three-day visit to campus in April, which included the lecture and a workshop with many of his colleagues from PIH and Harvard.

The project, tentatively called “From Aid to Accompaniment,” explores what happens when “foreign aid” collaborators are not thought of as “donors” and “recipients”, but as partners who walk together and accompany one another. Farmer will write the book’s overview and more than a dozen case studies will examine the implications of taking accompaniment seriously in places like Mexico and Russia, Rwanda and Haiti, Sudan and Nepal.

Farmer’s blend of radical optimism with an often dry, sardonic wit, was apparent during his remarks earlier in the evening.

He described an experience of insomnia and inspiration, mentioning the story of one young man, Ibrahim, who lost 22 family members to the Ebola virus. Since Farmer got involved in West Africa nearly two years ago, such stories and images of Ebola’s devastation have regularly disrupted his sleep.

Awake at 2 a.m., Farmer was obsessing over how to get more people to think about how to strengthen health systems in places like Liberia and Sierra Leone. He says he came up with a great idea, wrote it down and was able to sleep. When he awoke, he unfolded the sheet of paper.

“Do you know what was my brilliant idea to bring people into this important problem?” he asked. “Ebola: The Musical.”

“You laugh,” he said in response to the audience’s reaction. “Shouldn’t we use our best minds and creativity to make addressing Ebola as immediate and important, as say, getting tickets to the musical Hamilton?”

Farmer believes people often get the Ebola story wrong. The epidemic was not so much a matter of bush meat consumption, faulty education about virus transmission or “exotic funeral rituals,” he says. Rather, it is a matter of missing pieces: No functioning health systems. No clinics. No IVs. None of the basic stuff of modern medicine that saves lives.

PIH has made a long-term commitment to partner with — to accompany — governments in both countries, not merely treating Ebola, but helping to build health systems. The organization hires all Ebola survivors who want jobs, giving hope that one can survive Ebola and return to a full, productive life. Today, PIH has employed more than 800 survivors. Most serve as community health workers.

Farmer recognized the work of colleagues from Sierra Leone and Liberia, and made note of caregivers from all countries who had perished in service of others. “It’s the caregivers who are most at risk,” he said.

In the audience sat Marie Donohue, a pediatric nurse who now runs the Notre Dame Haiti Program and was one of 1,500 clinicians who responded to PIH’s call for foreign medical professionals to join the Ebola fight.

“I applied and was in-country in a matter of a few weeks,” Donahue shares with me after the lecture. She recalls working alongside African colleagues to care for pregnant and laboring women and their newborns. The doctors and nurses worked together to create supply procurement, laboratory and pharmacy systems and provided each other with clinical education, all towards providing better care for patients.

This is “accompaniment in action,” Farmer says.

“Don’t spend more than 12.4 percent of your time arguing with people,” he tells a student asking how best to make a difference. “Spend the rest of your time doing stuff.”

Sophomore Luke Maillie is the last student in line. For him, “doing stuff” just now means waiting more than three hours to talk to Paul Farmer.

Farmer, just as charismatic and eager at midnight as he was at the beginning of the evening, might say he’s waited three hours to talk to Maillie.

“Personally, I’d always seen global health as mostly statistics about how dismal the state of healthcare around the world really was,” Maillie says later. “But when I started reading about Paul Farmer and Partners In Health, this shifted the paradigm of global health for me to one of a way forward.” Maillie plans to become a doctor, spent last summer at a health clinic in Tanzania and will return there this summer. Tonight he received the inspiration he came for.

“So often you hear people saying that healthcare for all isn’t a realistic goal. But then there’s Paul Farmer, who seems to get a sense of enjoyment in proving that it’s not only right but feasible to provide healthcare for the poorest people on the planet.”