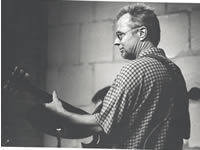 It’s a balmy Saturday night in downtown San Diego, and musician Chuck Perrin, a 1969 Notre Dame graduate, is, literally, in his comfort zone. In the Southern California coastal community that the Midwest native has called home for more than a quarter of a century, Perrin has claimed his niche in the fast-growing fringe of San Diego’s hip Gaslamp District (think Chicago’s Rush or Memphis’ Beale streets).

Perrin opened a music-only club, Dizzy’s San Diego, in 2000 to the delight of aspiring and seasoned musicians alike. Dizzy’s trademarked slogan “Where the music matters most” has become its marketing mantra, attracting jazz aficionados weary of high-priced concert venues and two-drink minimums. With no alcohol served on site, Dizzy’s is accessible to music lovers of all ages.

Tonight the front door to 344 Seventh Avenue is open so the fragrant summer air can waft in even as the sounds of contemporary jazz arrest diners on their way to a swanky new restaurant next door. Taking up his post at the door, Perrin collects a crumpled $10 bill, that night’s cover charge, stuffs it into a baggy pants pocket and motions the newcomer to one of the 70-or-so folding chairs facing the stage. His nightly accounting system is simple and based on a good deal of mutual trust. He tallies the receipts: 70 percent to the band, 15 percent to building owner Fritz Ahern and 15 percent to himself.

This is obviously a labor motivated by love, not commerce. Ahern concurs, “Chuck loves what he does. They’ve got a great piano at Dizzy’s and a great sound system that people just donated. One time I went in and there were only five people there. Chuck just shrugged and said ‘If I wasn’t here, I’d be listening to music at home.’”
A practicing anachronist, the web-savvy Perrin worships at the shrine of the Beat Poets, embraces the latest computer technology with gusto yet eschews cell phones. Sounding neither self-effacing nor aggrandizing, he extols his craft with a delight that seems to scream “I can’t believe I get to do something so cool!”

Perrin began writing music in 1963 and in 1966 started his record company, Webster’s Last Word, with his sister, Mary. Folk music and covers of popular songs dominated much of his early career as a vocalist and acoustic guitarist. He performed with Mary and with the five-member ND garage band The Shaggs, as well as with a number of other groups throughout the 1960s. The brother-sister duo played the coffee house circuit then worked in Hawaii for six months, Chicago and at Opryland in Nashville before moving to San Diego in 1976.
In 1978, he made a career move “to set myself up so that I could do what I wanted in the future.” He took a position as the entertainment scheduler for a national restaurant chain, a post he held until 1990. “I still schedule entertainment for them but as an independent contractor,” he explains. Perrin credits the job with helping him understand the corporate mindset and function as a fluent interpreter between the commercial and creative minds in his business.

Perrin is an outspoken opponent of recent music industry crackdowns on Internet websites that encourage sharing of copyrighted recordings. “Soon, music will be legally available free or at a very low cost to everyone to download or access by whatever technological means is available,” he says. “This is an amazing time to be a creative person. You have control over your own stuff if you want it. Technology has put the tools at your disposal.”

Perrin spends most of his free time writing, arranging and recording his own work. Two previous CDs, Beat.itude and Swallow Life, have earned cult followings. A third CD, Love Matters, is scheduled for release in February.

Love Matters is a musical Valentine to Nona, Perrin’s second wife. “We understand what each other values in a relationship and enter into that commitment willingly,” he says, adding, “I dream about her at night and get to live my days with her too.”

The CD package (all of Perrin’s packaging is as demonstrably creative as the content) he says, “is shaping up to be a book of poems with a music CD enclosed. . . . I hope it expresses the real, un-clichéd feelings about love and especially that elusive lightning we all want to capture and hold on to — passion. With love, the challenge is not the flame, which flickers seemingly at will. It is learning how to fan the fires of passion and keep them burning fiercely.”

For more information on Perrin’s recordings or Dizzy’s San Diego, visit www.dizzyssandiego.com or chuckperrin.com or leave a message at (858) 270-7467.