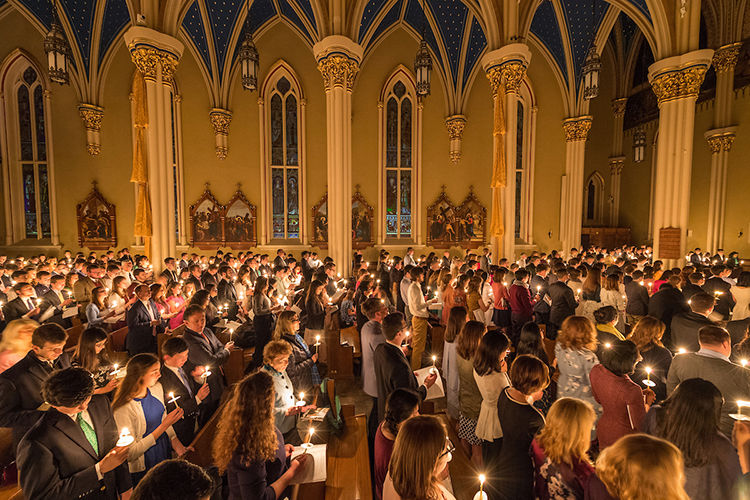 If you haven't heard, it's been a bit of a week here at Notre Dame. Shortly after the fencing team won another national championship and 17 years to the day after the Irish women's basketball team clinched its first NCAA championship, Muffet McGraw’s 2018 squad took the title on a heart-stopper last-second shot on Sunday, April 1. Arike Ogunbowale's game-winner gave new meaning to "the shot heard 'round the world," Kobe Bryant expressed his love for the team on Twitter, and the women were given a hero's welcome back to campus on Monday from a hundreds-strong crowd that included Mayor Pete Buttigieg and Senator Joe Donnelly '77.

But before this was championship week, it was Easter week.

University photographer Barbara Johnston captured this image at Saturday's Easter Vigil, presided over by Father Peter Rocca, CSC, rector of the Basilica of the Sacred Heart. It's fitting that the big Irish win coincided with the pageantry and joy of Easter Sunday. But as campus floats down from its championship high, we like this reminder that the week had a quiet start, lit not by flashbulbs but by candlelight.

Now, if you need us, we'll be searching the biology department for someone who can confirm that it's medically possible for Ogunbowale to have ice in her veins.