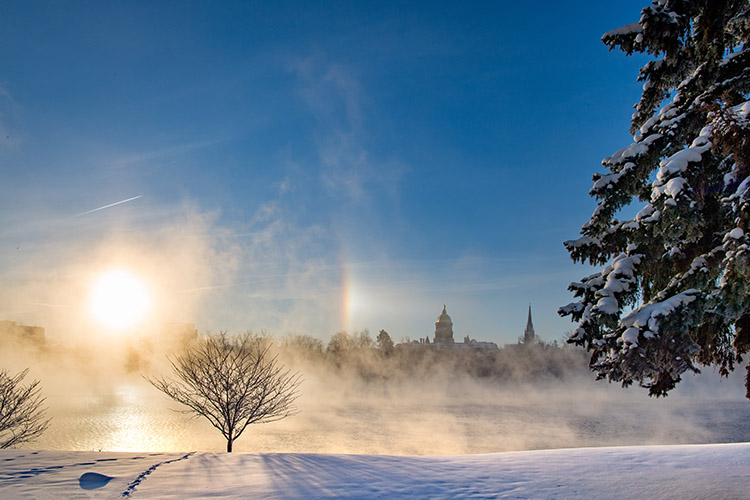 Though new buildings may rise and students and professors may come and go, some things at Notre Dame never change. Chief among them? The wackiness of a South Bend winter.

South Bend has seen its fair share of unpredictable and extreme winter weather in the first days of 2018 — for instance, a nearly 60-degree day on January 11 followed by a mini-ice storm on January 12 — but the craziest day so far was January 2, captured here by University photographer Matt Cashore ’94.

On that day, University employees returned for their first day of work after winter break in temperatures that plunged to 15 degrees below zero and wind chills as low as -34. In these extreme conditions, Cashore was able to capture a rare meteorological phenomenon known as a sun dog. Photos of the rainbow-tinted flares earned hundreds of retweets on Twitter, but we like this shot that reveals a bit more of the science behind the ’dog.

Sun dogs are a type of halo around the sun, caused by the refraction of the sun’s light against ice crystals in the atmosphere. Technically, they can appear any time, but they’re at their strongest and most visible in far-below-freezing temperatures — which we've had in spades this week at Notre Dame.