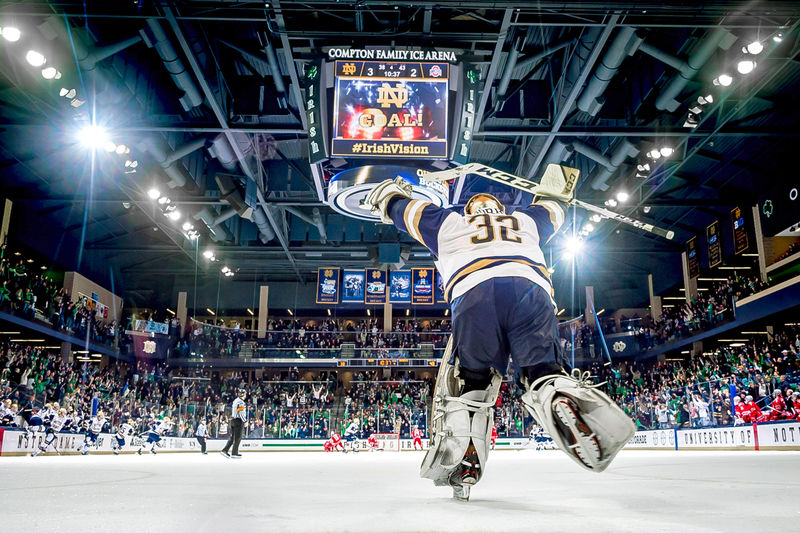 Here, university photographer Matt Cashore ’94 captured Hobey Baker Award candidate Cale Morris’ reaction as the Fighting Irish won the Big Ten tournament championship game against Ohio State. Leading the NCAA with 1,144 saves and a .945 save percentage on the season, the sophomore goaltender has been critical to the team’s success. But, of course, scoring goals is as crucial to a hockey team’s success as blocking them, and the Irish have lit the lamp plenty this season. Captain Jake Evans leads the team in points with 11 goals and 31 assists and Andrew Oglevie and Cal Burke have both put the puck in the net 13 times this season.

Notre Dame moved through the first two rounds of the NCAA tournament in dramatic fashion, winning against Michigan Tech in overtime and narrowly beating Providence with a goal by Dylan Malmquist in the last 27 seconds. Now they head to the Frozen Four for the second straight year, where they’re set to play Big Ten foe Michigan on April 5. Notre Dame suffered a tough semifinal loss against the University of Denver last year, but this time, the Irish on the ice hope to make it a couple steps further and win the whole thing.

Two pieces of Big Ten hardware is nice, but a National Championship trophy? Even better.