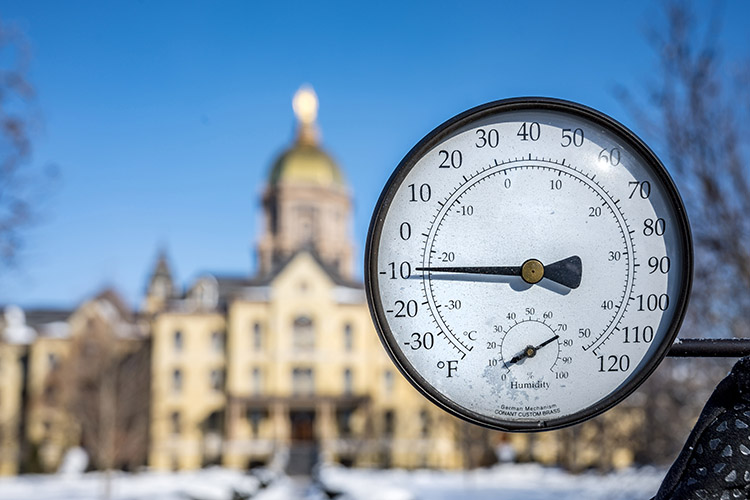 While the frigid temperatures of January 30 wasn’t the coldest day in Notre Dame history (the temperature to beat was -22°F, set in 1943), last Wednesday was a deeply unpleasant day to be in South Bend, Indiana. This surge of cold began that weekend, with temperatures continuing to dive, and dive, until they bottomed out on Wednesday –– reaching a record low for that date of -20°F, recorded at 9:30 in the morning.

This week’s photo, taken a bit later at 10:36 a.m., shows a slightly warmer temperature. This cold, combined with wind chills that dipped to more than 40 degrees below zero, was enough to close the University down for a 42-hour period. Classes were cancelled, and the career fair was postponed. Professors were forced to get creative with their syllabi, especially those whose classes had already been suspended the week before to allow students to attend the MLK Celebration Luncheon.

But not all hope was lost. The dining halls remained open for extended hours since other campus eateries were forced to close, and both the Hesburgh Library and LaFortune Student Center were fully functional on their lower levels, with special parking accommodations made for their employees.

The greater South Bend area also faced obstacles during the deep freeze. Many businesses closed their doors, and the United States Postal Service halted mail delivery on Tuesday and didn’t resume deliveries until Friday morning. Additionally, the greenhouses at Potawatomi Conservatories lost 20 percent of their plants during the freeze, likely the fault of out-of-order radiators and a burst pipe.

Things are looking up for the Michiana area, however, as, since Sunday, it’s been plagued with rain and gloom instead of freezing temperatures and snow.