In over 20 years of photographing Notre Dame sports both as a student and a professional, I’ve seen some historic moments through my viewfinder. Highlights include the 1993 “Game of the Century” against Florida State, the “Bush Push,” National Championship games in both football and women’s basketball, the five-overtime Louisville men’s basketball game, and most recently Notre Dame’s men’s hoops’ first Elite Eight appearance since 1979.

What makes sports so appealing is the raw, unfiltered, in-the-moment emotion that goes along with winning or losing historic games. Normally as a photographer I put my alumnus status aside — I try to be agnostic and tell the story of the game whether that means ND wins or loses.

But for the first time I had the privilege of covering the NCAA tournament as the official team photographer. That meant traveling with the team, meals with the team, access to practice, locker rooms, and one other critical item: At the regional final the team photographer is one of only a handful of people allowed on the court in the moments immediately following the final horn. I had the potential privilege and the pressure of showing — up close and personal — what it would feel like to be the first Final Four team in almost four decades.

Which is what made the ND-Kentucky game so nerve-racking.

I’ve seen plenty of big games come down to the final tick, but I can’t remember any others which had 20 lead changes. Am I going to see agony or ecstasy? Mayhem or misery? Run onto the court or hang back? And for a photographer there is a whole added layer of logistics: I have three cameras, a stool and a monopod. How do I make sure I have what I need in case I have to run onto the court? In addition to keeping track of the on-court action in the final minutes, I was making the calculations of which camera I would have in my right hand, which camera I would have around my neck, double-checking camera settings, rehearsing in my mind how I’d grab my stool, ready to play jump rope with the broadcast camera cable, guessing where to rush to first—players or Coach Brey? And, of course, being conscious about not whacking anyone else’s knees, noggins, etc. with my equipment!

And then it was over.

Stunned silence as the mayhem I’d prepared for happened on the other end of the court. From every nerve and neuron going full throttle suddenly going to idle. In an instant. It’s exhausting, and I’m just…taking…pictures. 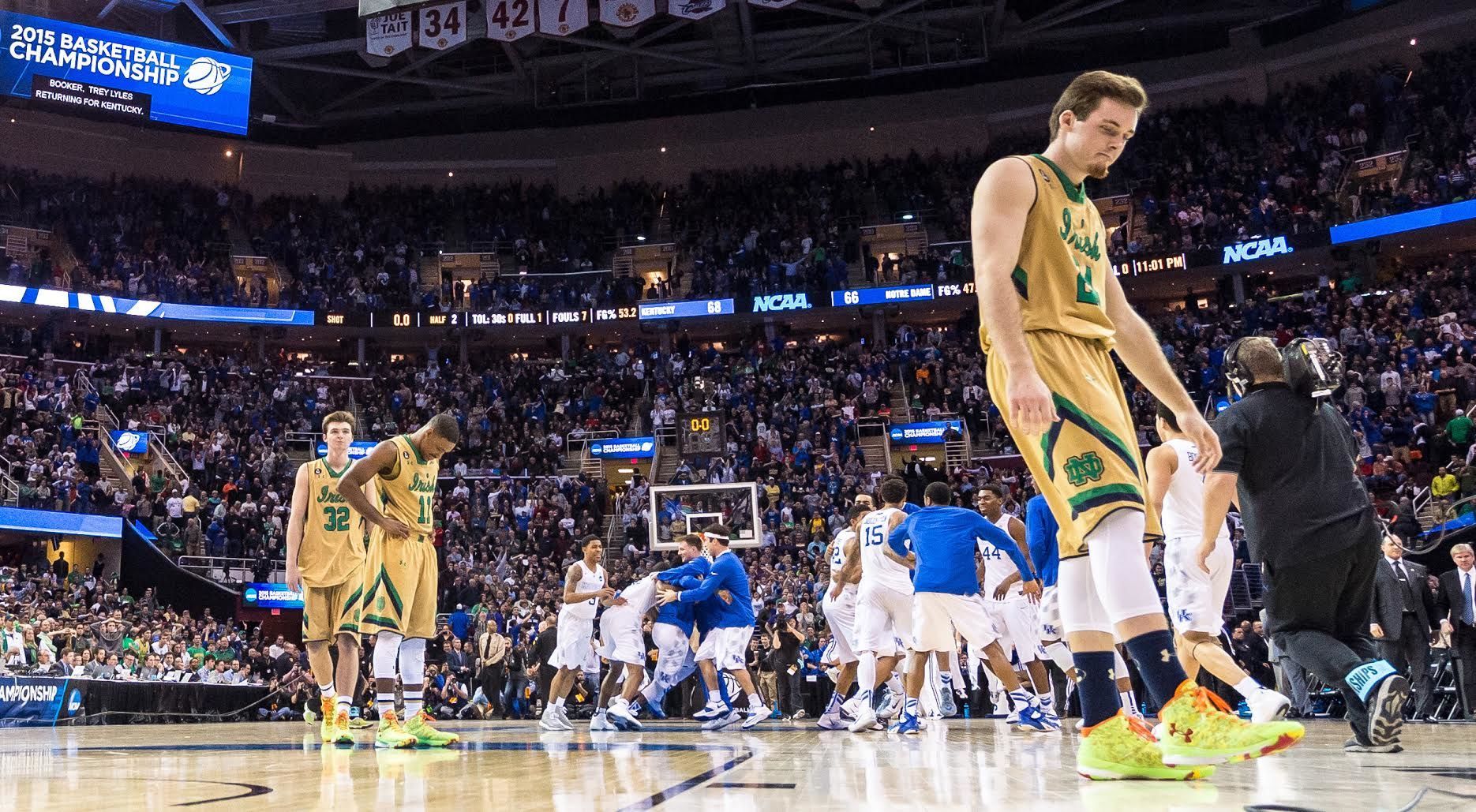 Matt Cashore is the senior photographer at the University of Notre Dame. He invites you to view more photos from the NCAA Sweet 16 and Elite Eight and from the first two rounds in Pittsburgh.