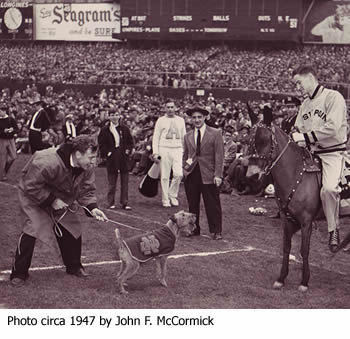 Sixty years ago our dad, John F. McCormick, began his freshmen year at Notre Dame as a 24- year-old, newly discharged veteran from World War II. Dad had not originally planned to attend Notre Dame because, as he put it, “a Notre Dame education was not an option for a poor kid from Lima, Ohio.” However, he landed at Notre Dame after hitchhiking with a childhood schoolmate and fellow war veteran, Virgil Cassidy, who wanted a traveling companion.

During the visit, Dad was approached by a priest who inquired about his college plans. He explained that he might enroll at the University of Dayton or Ohio State the following year. Upon learning Dad was eligible for the G.I. Bill, had decent high school grades (thanks to the Toledo Ursulines) and could come up with $100, the priest slipped him a paper across the desk and told him to sign it. The next day, July 4, 1945, Dad became a full time Notre Dame student. Indeed, “going along for the ride” was a trip that changed his life.

Dad spent the next three years at Notre Dame, only returning home for Thanksgiving and Christmas each year. When he wasn’t in class or studying, Dad worked a variety of jobs. He would tell us that working for the University was somewhat like being an indentured servant. He spent countless hours in the Huddle, flipping burgers and cleaning its kitchen, scraping the grease off the ceiling and the floor. He filled Coke machines and cut grass all over campus until his eyes swelled shut because of his horrible allergies.

Dad was also a prefect in Sorin Hall and had the unpopular task of taking daily Mass check, which required him to report those “Men Missing at Mass.” Yet being a prefect in Sorin wasn’t all bad—Dad met and kept a lifelong friendship with Father Ferdinand Brown, CSC. In fact, he worked so many hours while a student that the University owed Dad money when he graduated.

Additionally, to earn some spending money, Dad, along with classmate and friend Jim Ferstel ’48, photographed school functions. Together they captured many of the memorable moments during the late 1940s: Vetville, Army/Notre Dame games (see photo above), Heisman Trophy winners Johnny Lujack and Leon Hart, Bengal Bouts, not to mention numerous social events and an occasional Notre Dame wedding. Dad and some of his photos appeared on the cover of Scholastic Magazine and in the Chicago Tribune Sunday Rotogravure —remarkable considering his eyesight was so poor he was legally blind.

Our Dad loved Notre Dame, and his experience at the University remained a profound gift throughout his life. He cherished the people, the study, the discipline and of course, the football. Year after year, he looked forward to games in the fall, especially the games during the 1980s when his son, Kevin, served as an assistant coach under Gerry Faust. He treasured the Grotto, morning Mass in the Crypt and a quiet walk near the lake. Clearly, though, Dad’s best time at Notre Dame was meeting the love of his life, Mary Bishop McCormick, with whom he shared 56 years of marriage, 10 children, 40 grandchildren and 5 great-grandchildren.