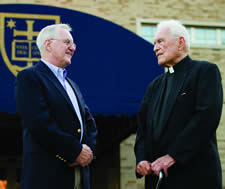 Accompanying a priest like an altar boy, Tom Scanlon headed up a mountain made dangerous by man and nature.

The Peace Corps volunteer had graduated from Notre Dame in 1960, just two years earlier, and, after spending time in graduate school, the Scranton, Pennsylvania, native had wended his way from training on the bucolic South Bend campus to a Chilean mountainside avoided by police and government officials.

Inspired by a friendship with Tom Dooley, the famous humanitarian who worked in Southeast Asia, Scanlon had been personally recruited by then Notre Dame President Rev. Theodore M. Hesburgh, CSC, to join one of the first groups of Peace Corps volunteers to go abroad after Congress officially authorized the agency.

During the Peace Corps training, Scanlon says, he and his peers shared the big fear that after countless interviews and classes they would miss out on a chance for overseas duty.

More visceral dangers lurked at the base of the mountain named Catrihuela — “lonely swan” in the local dialect — for Scanlon and the priest, Father Eugene Stiker, a North American missionary who was going to say Mass. The mountain’s 20-kilometer road was pitted with craters that would bruise a jeep and its passengers, and the reward for gritting out the journey was meeting the armed Communists and Socialists who had taken over the area’s villages.

Undaunted by the defining ideological clash of that time, Scanlon eventually pitched the Chileans on forming a co-operative for the production and marketing of the local lumber, cut from a cypress called alerce, that could help them buy food for the winter months.

Come back in the winter, they told Scanlon. When the mountain fills up with snow, we will have time to talk about this.

While subsequently visiting the volunteers, Father Hesburgh asked Scanlon what he was doing, a conversation later memorialized in a speech by President John F. Kennedy and encapsulating the hope and romance, the naiveté and frustrations, of one of the most potent symbols of idealism in American foreign policy.

“I am waiting for the snow,” Scanlon said.

With the imminent dismantling of the nation’s space program, the Peace Corps stands to become the most enduring public policy legacy of the short presidency of John F. Kennedy and his New Frontier. In its 50 years, it has been portrayed both as a silver bullet and a misadventure, but it undeniably has staying power.

At its inception, the Peace Corps was infused with the same forces that defined Kennedy — a message of renewal and exploration, a “frontier” ethos revered in the American character that was both driven and hampered by competition with the Soviet Union and communism.

“[D]iplomats skilled in the languages and customs of the nation to whom they are accredited — teachers, doctors, technicians and experts desperately needed in a dozen fields by underdeveloped nations — are pouring forth from Moscow to advance the cause of world communism,” Kennedy said in a 1960 speech during his presidential campaign, adding, “Missiles and arms cannot stop them — neither can American dollars. They can only be countered by Americans equally skilled and equally dedicated — and if I am elected, I ask you to help me find those Americans.”

“It was the start of something that was terribly exciting and terribly important for the time,” Scanlon says. “It was important for our country to really be seen and looked at as a model.”

A primary concern driving Sargent Shriver, Kennedy’s brother-in-law and the first director of the agency, was to make sure the Peace Corps did not become another part of Washington’s bureaucratic tangle of the foreign policy establishment.

Shriver wanted an agency to be sustained on the experiences of volunteers like Michael Duffey ’70, ’81Ph.D., now a theology professor at Marquette University. After graduating, the Iowa native’s wanderlust led him to the developing world.

“I thought, ‘I have to see what it is like to live with the have-nots,’” he says. “I was very eager to just sort of set out and see what I could find.”

For two years, Duffey was in Nepal as an agricultural adviser in the thatched-hut village of Tulsiper, about 20 miles from the border with India in the Ganges River plain.

Botched cultural translations were probably inevitable. Duffey once approached a local man after buying baby chicks from India in the hopes that they could grow a flock and provide both protein and profit.

“I could see from him that wasn’t an argument that would make sense,” he says.

The success of such individual projects, however, may matter less than the interaction itself.

“I think it was probably helpful for them to know someone would come from far away,” Duffey says. “It changes the perception of the United States and the commitment of the volunteers when they return home.”

From its inception, the Peace Corps has been fighting the notion that it is largely a dumping ground for aimless liberal arts graduates to work on amorphous development projects. To some degree, two of the organization’s three goals — helping promote a better understanding of Americans on the part of the peoples served, and helping promote a better understanding of other peoples on the part of Americans — do little to fight that image since they rely on relationships that are formed, nurtured and continued without the benefit of data tracking.

Scanlon says the benefits of those social connections are reaped in the United States, too, as people inspired by their work change the direction of their lives. He is one example, having founded Benchmarks, Inc., a consulting firm for domestic and international development programs.

Perhaps one of the Peace Corps’ greatest achievements has been its survival through the vagaries of 50 years of strife and politics, from the Vietnam War to the wars in Iraq and Afghanistan, from the Great Society to Yes We Can.

Notre Dame has had more than 800 graduates serve in the Peace Corps since its inception, and 25 alumni are in its ranks today, according to the agency. Earlier this year, the University was ranked 18th among the top 25 medium-sized universities in producing Peace Corps volunteers, the 11th year in a row the school has been in those ranks.

Notre Dame did play a pivotal role in the Peace Corps’ beginnings, with Father Hesburgh helping to set up a pilot program and hold training on campus. But the religious identity of the school was problematic; the White House wanted to make the Peace Corps a secular institution.

Hesburgh noted in his autobiography, God, Country, Notre Dame, that Shriver’s administration was “gun-shy about the ‘Catholic factor.’”

That push and pull remains in South Bend — students are encouraged to participate in service as undergraduates and alumni but the faith component is explicitly absent in the Peace Corps versus other high-profile options such as Notre Dame’s own Alliance for Catholic Education.

Michael Hebbeler, the director of Student Leadership and Senior Transitions at the Center for Social Concerns, helps inform students about post-graduate service opportunities.

“There is a growing interest in the international field. . . . Students are connected into it,” he says. “At a Catholic university, that sense of service is greater and cultivated more.”

The Peace Corps’ secular stance can be a deterrent, Hebbeler says, but individual students have to make the decision whether they are ready to be independent — with their own faith and the rest of their selves — in a developing, and potentially isolating, nation for two years.

“Do you want to go off and do it by yourself? Are you that strong?” he says. “It is pretty daunting. That is a long time away from home and everything you know.”

Rose Lindgren ’04 was willing to accept the challenge and is serving in the West African nation of Togo. She saw the Peace Corps as a perfect way to get experience and help launch a career on the global stage.

Although the Togo air initially felt like swimming through hot water, Lindgren has engaged with small business development, worked on a national level a scholarship for girls, and helped develop a water committee that built a local school’s cistern.

“We are learning true on-the-job skills,” she says. “You do a little bit of everything.”

Rok Teasley, the Peace Corps’ recruiter for Notre Dame, says the University has averaged about 17 nominations the past four years but has already garnered 33 this year. He attributes this “huge jump” to growing awareness around the Peace Corps’ 50th anniversary and Notre Dame’s role in its founding, as well as the combination of a service opportunity with professional development.

The Peace Corps’ appeal, however, has been clouded by dark problems. The 2001 disappearance of Walter J. Poirier, a 2000 ND graduate volunteering in Bolivia, led to government inquiries questioning the efficacy of the Peace Corps in looking after its own. (See: magazine.nd.edu/news/10516.) A July 2002 Government Accountability Office report found “uneven performance in developing safe and secure housing and work sites, responding to volunteer concerns, and planning for emergencies.”

The Peace Corps also has faced critical hearings and legislation from Congress in response to past rapes of volunteers and the 2009 killing of Kate Puzey, a 24-year-old volunteer in Benin who had her throat cut after telling her supervisors another employee was sexually assaulting girls.

Teasley emphasized the Peace Corps only goes to countries where it has been invited and has determined there are no security dangers. Volunteers also receive three months of in-country training to make sure they understand an area’s language and cultural norms.

“That is your primary line of defense,” he says.

Also, says Lindgren, the agency has begun to communicate more effectively and to make sure volunteers have specific objectives. She believes it is important to prevent any interest in increasing volunteer numbers from blunting the efficacy of those already on the ground.

“The emphasis is more on making what we have better,” Lindgren says. “Everyone comes in wanting to change the world.”

In order to last for another 50 years, it will be up to the Peace Corps to make sure the idealism of its volunteers can survive both outside scrutiny and two years of likely painstaking, minuscule progress. The agency has to make sure everyone is able to wait patiently for the snow.

“The Peace Corps has to learn, it has to improve,” Scanlon says. “The problems in the developing world are very definitely there, and there will never be a paucity of Americans who want to go out.”