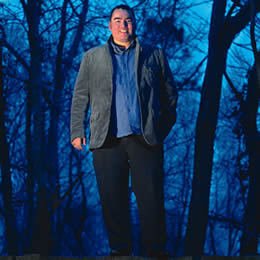 Imagine you find your home in the Alaskan Yukon territory, with a bitter wisp of cold that never seems to end. For Casey Dame ’92, the coldness could be found inside as well. The first five years of his life were spent in a foster home while he dreamed that a kindhearted family might add him to their loving brood. In that time, other dreams emerged—dreams of monsters, dragons and spaceships, the kinds of things numerous children believe in but must eventually put aside in adulthood, when the real world of the 40-hour work week firmly takes hold.

Now, when Dame works, 40 hours would be a dream. His job is a grueling life-consuming process that can hole him up for as much as six months at a time, anywhere his work sees fit to send him. And the monsters go with him. As a creature technical director who’s worked on such Academy Award-winning films as The Lord of the Rings: The Return of the King and now on Dr. Seuss’ family classic Horton Hears A Who!, Dame never left his dreams behind—he lives them.

“It all began with a movie called Mind’s Eye,” he says. “It was a series of weird, abstract-driven animations using the computer as a tool. I looked at that and realized that this was really cool—this was what I was meant to do.” This, he later learned, was about problem-solving as much as anything. “You really need to understand the full character setup as a technical director,” he says, “so I’ll create a skeletal structure for characters and perhaps even muscle structure—skin and hair, fur, tentacles. . . . I’m like a puppeteer, except I move the strings through a computer.”

Dame also learned to devote time to observing things, from how people walk to how birds fly, from bone structure to the composition of skin. “All these things reveal character without saying a word.”

Much To Learn
All the lessons weren’t revealed to Dame after stumbling upon Mind’s Eye years ago; it was only the beginning of his detective work. “I cold-called people from the film world and did a lot of research to figure out how I could be a part of this.” It was 1995, three years after college graduation. Dame was working then as a real-estate appraiser.

“Looking back, it’s hard to believe I fell into that hole of just working for a living without being passionate about it.” Still, it wasn’t just passion that drove Dame, it was a fellow graduate and his adopted family, the one that plucked him out of Alaska and into the warmer, if only slightly, climate of Saint Paul, Minnesota. “My parents were always supportive of my art abilities, and I was always in art classes whenever they had them in the area. When they didn’t have them close by, they were finding youth programs through colleges. Never had a shortage of pencils or paper. It makes a difference.”

As did the pep talk he received during a business lunch with former Fighting Irish football player Dave Casper ’74. Dame says he was moping about how miserable the real-estate market was, and Casper reminded him of where he was. “This is America, Casey,” he said. “You can do whatever you want.” Dame still chuckles at the “cliché corniness” of the statement, yet is still taken aback by the truth of it. “I was making excuses for myself,” he says. “He made me wise up and keep my eyes open for opportunities.”

Dame’s research made him conclude he needed to learn high-end computer systems if he were to forge ahead. He enrolled in the School of Communication Arts in Minneapolis, returning him to his hometown and hot home-cooked meals. At the end of the year-long program he had a demo reel, which he sent to film studios, post-production houses and gaming companies. They sent back rejection letters, 80, in fact, although he gained valuable contacts with people in the industry. It was studio number 81 that gave Dame his real shot, a small project for Hanna-Barbera, the animation company most famous for Saturday-morning cartoon fare. Dame would cut his animated teeth on the –The Real Adventures of Jonny Quest_. “I jumped in my car and drove three days out to Los Angeles—I was never so excited in my life.”

Stepping into the Ring
Move ahead, years later. Director Peter Jackson and New Line Cinema had scored an astounding studio-system altering hit with –Lord of the Rings_. Its much anticipated third installment, The Return of the King, would be nothing short of a pressure-cooker production. “It required six months, seven days a week, 12 hours a day,” Dame recalls. “When I got off the plane they told me it would be a blast—and they were right. What I enjoyed is people were so enthusiastic about the story that it sucked you in. We’d see Orcs all doing battle, then hours later you’d see one smoking a cigarette and talking on a cell phone—surreal.

“I was with animators setting up their scenes in a part of New Zealand called Wellington. You can see my work on the Pelennor Fields battle scene, the smashing through crowds of soldiers. I do a lot of gore scenes in films, and it’s fun to do. If a guy has to be decapitated, I have to ask myself how his head is supposed to come off. Never thought I’d be asking myself that question!” he says with a laugh.

In the breaks between projects, he and his wife, Michelle Ramos ’92, travel. “We’ve visited Thailand, Australia, Fiji, France, Vietnam and stopped in for Oktoberfest in Munich. We celebrated our 10-year anniversary by renewing our vows on a beach in Nayarit, Mexico. Our goal is to set foot on all seven continents while we are still young.”

His work-related goal involves staying fresh. “The technology is always changing, so it’s important to keep up. As an artist it’s important to always be learning,” he says. “In my spare time I study. I am currently reading five books. They vary from quantum physics to poetry by Richard Brautigan. . . . I think it helps to be a geek in this industry.”

This particular geek has been a part of films that have grossed countless millions worldwide, from Lord of the Rings to The Chronicles of Narnia to Pirates of the Caribbean: Dead Man’s Chest. But there’s one billion-dollar franchise Dame will never forget having a hand in. “As an 8-year-old I had seen the first Star Wars and never thought I’d be working on the last one. I didn’t really know how much of a fan I was till I’m on the project and I’m working on Wookies and C-3PO. I remember just pausing for a moment and thinking to myself, ‘I could do this forever.’”

A New York-based freelance writer, Butterman previously contributed profiles of directors Tony Bill and M. Clay Adams for this magazine. He can be reached at ericbutterman@yahoo.com.