Lifting a panel of romaine lettuce, Jan Pilarski ’79, ’96M.A., exposes a tangle of plump roots. Over a year’s time, her social enterprise business, Green Bridge Growers, can produce several hundred pounds of organic vegetables and herbs. This year’s winter crop includes sorrel, kale and rosemary. On a side table sits snipped basil, which is headed for the local Whole Foods Market. 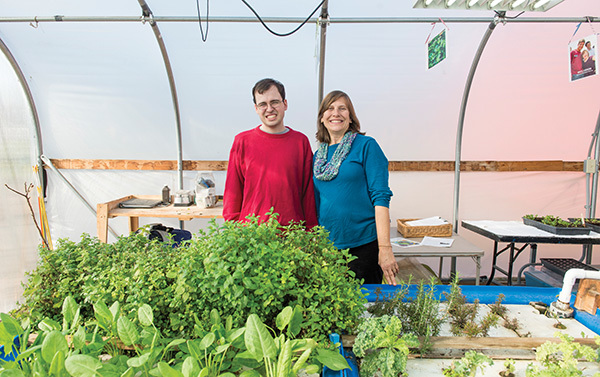 The entrepreneurial venture Pilarski began with her son Chris Tidmarsh is an aquaponic farming operation that provides training and jobs for young adults on the autism spectrum.

After graduating from Hope College in 2010, Tidmarsh had trouble with employment — a common challenge for individuals who, like him, are autistic. Considering her son’s interests, education and experience — Tidmarsh has an environmental studies and chemistry degree — Pilarski says she struck on aquaponic growing as a field where her son and others with autism could apply their specific skills and talents.

Green Bridge Growers, which offers sustainably produced crops year round, yielded its first harvest in 2013. Plants are cultivated through a method called aquaponics, an indoor growing system that recirculates water between a fish tank and plant grow beds. Fish are kept in a large barrel and produce fertilizer through their waste, which breaks down naturally into nutrient-rich water. The water is pumped out of the tank, filtered to remove any solids, then piped into the grow beds. Plant roots absorb what’s needed and, in turn, clean the water, which cycles back into the fish tank.

Tidmarsh and other caretakers track the system’s water chemistry almost daily, using testing kits to monitor pH and nitrogen levels. An imbalance means they feed the koi a bit more or less. “The level of work and the focus that these folks provide is exceptional,” Pilarski says. “That’s what we hope to share with others, that sense of the capability of people with autism.” She cites attention to detail and focus as among the strengths they bring to the job.

The system’s watery burble is a soothing constant inside the prototype greenhouse at Hannah and Friends, a South Bend living community and day center for adults with different abilities. Tidmarsh and Pilarski are involved with the nonprofit organization, and they thought the location would mutually benefit the community and their start-up. And it has: Green Bridge Growers’ produce is used within the community for meals and cooking classes.

Tidmarsh and his coworkers also give tours of the greenhouse, a practice that develops leadership and public speaking skills. “They talk about how everything works together, and what’s produced, their role in it,” says Pilarski, “and also what [it means] to them to finally have work that they enjoy, where they’re making a contribution.”

The first years of production allowed the team to test and prove that aquaponics is a viable system and that special-needs individuals are receptive to learning the skills required for this type of growing. “I like taking care of the plants and watching them grow,” Tidmarsh says. “And I like seeing my work pay off. I’m able to use a bit of my science training.”

When Pilarski set out on the venture, she knew it would be a huge undertaking. So she sought help from a number of local resources. Notre Dame, she says, “is very much in the DNA of who we are.” As a first step, she enrolled in a social enterprise course with the Gigot Center for Entrepreneurship in the Mendoza College of Business. For a class project, Pilarski teamed up with student groups who helped her fashion a business proposal for Green Bridge Growers. The course, says Pilarski, “jumpstarted my whole thinking about how to design the business, what sort of model to use, how to measure impact.”

She then presented the idea during a Startup Weekend event sponsored by the University’s ESTEEM (Engineering, Science & Technology Entrepreneurship Excellence Master’s) program. Later she partnered with FISH (Fellow Irish Social Hub), a social venture incubator that works in cooperation with the Gigot Center and provides clients with mentoring in areas such as marketing, finance and the legal aspects of business. “They were very instrumental to our development,” Pilarski says.

Through her ties with the ESTEEM program, Pilarski even found assistance with the science that was required for her entrepreneurial leap. Four students in the Naughton Fellowship Program, all of them engineers from Ireland, offered advice on where to locate the greenhouse, how to construct and heat it, and helped her and Tidmarsh build it.

Pilarski also credits many local volunteers who support the business and its social mission. Equally important, she notes, are Green Bridge Growers’ ties with Indiana University South Bend, where she and Tidmarsh were named fellows for its Center for a Sustainable Future. “How we approach our work seems so much less daunting because of these different partnerships that we have in the community,” she says.

Pilarski’s enthusiasm for social justice work emerged while volunteering as an undergrad with Notre Dame’s Center for Social Concerns. Thanks to the guidance of its founding director, Father Don McNeill, CSC, ’58, Pilarski learned about Catholic social thought and how to live one’s faith. “I would say my work since then has been how to put that into practice,” she says.

After graduation she joined Holy Cross Associates in Portland and later worked at the social justice office of the Archdiocese of Washington, D.C. When Pilarski came back to South Bend, the mother of four earned a master’s degree in theology and returned to work for the Center for Social Concerns. In 1997, she became director of the Justice Education program at Saint Mary’s College, where she still teaches part time.

Recently, Pilarski acquired two more greenhouses at a site just south of South Bend and is working to add employees and build up the project’s influence, so other “employers can see that it would be in their interest to hire people with autism.” Tidmarsh shares that goal with his mom. “It’s great to have us working as a team,” he says. “We’ve learned a lot together.”