It might make science majors cringe, but a useful metaphor for understanding the extraordinary change in undergraduate science education taking place in the opening this autumn of the Jordan Hall of Science is to call it a quantum leap. 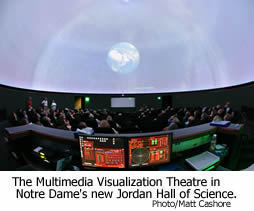 Properly, this would mean the smallest possible change as electrons zipping around in an atom shift from one energy level to another. But the conventional use of the term is most appropriate to the Jordan—progress that is sudden, enormous and illuminating.

Joseph Marino, dean of the College of Science, uses plain English to convey Jordan Hall’s significance. “The magnitude of this project is unparalleled in the United States,” he said while giving a building tour in August. “No other university, whether it’s Harvard or other schools in the top 10 or 20, has put an emphasis on science the way Notre Dame has.”

The University’s administration, the trustees and donors, the building’s designers and the science faculty have poured $70 million and many years into Jordan Hall’s ingenious uses of space and cutting-edge teaching technology to make sure assessments like Marino’s are no hyperbole. As students prepared to start the 2006–7 academic year, work crews and Notre Dame scientists were putting the finishing touches on the hall’s four-story, 202,000-square feet interior.

Two of the new building’s chief virtues—its size and its layout—will provide students with what Marino calls an “unconstrained learning exposure to science.” Roomy common areas give students places to study together between classes. Lecture halls and labs were designed with the same ideas in mind: using space and equipment to prompt creative thinking, interdisciplinary learning and more frequent interactions among students and teachers.

Gone from the undergraduate experience are the cramped, chaotic labs that tested students’ patience. Jordan’s 40 laboratories will more than double students’ work space, even accounting for the 20 percent increase the facility will allow in the registration capacity of most lab-course sections. Many labs are adjacent to a data-analysis room, so students won’t lose time between experimentation and analysis the way they formerly did.

The increased research activity will have a lighter environmental impact. State-of-the-art fume hoods and evaporators, for example, will drastically reduce water use and improve air quality in the building.

Marino says the new hall will give students “a more realistic view of how science is done,” whether in academia or the premier laboratories of the private sector. Equally important to him, however, is the intellectual boost he believes the hall will offer.

“We want to prepare independent thinkers and leaders,” he said. “The building itself isn’t going to do everything. But if you don’t have the top facilities, you can’t dream.”

If the space allotted for undergraduate science has improved, consider some of the new teaching technologies available this fall. Scratching the surface from north to south, Jordan’s new venues include:

—*The Multimedia Visualization Theatre*. Most will see the semidetached, domed octagon as a 136-seat planetarium. It will serve a planetarium’s purpose, making use either of digital software that can take audiences to the moon, Mars or beyond the Milky Way, or of live images gathered from the observatory on Jordan’s roof. But it also will be used to immerse students—or, on weekends, visitors—in three-dimensional learning experiences of unprecedented clarity in fields ranging from cell biology to organic chemistry to architecture. A bank of 11 computers will coordinate a pair of first-in-the-world Sony projectors to generate full-dome images of up to 16 million pixels and match them with a 9000-watt JBL surround-sound speaker system.

—*Twin 250-seat lecture halls located off the ground floor concourse*. Each auditorium features three 21-by-12 foot screens where teachers might project videos, computer simulations, diagrams from an electronic whiteboard or real-time footage of demonstrations they are conducting in the front of the room. Students will sit in terraced rows as in many traditional lecture halls, but the chairs will swivel to allow students from one row to discuss lecture points across a table with those behind them. Instructors will be able to solicit student feedback through a wireless response system available throughout the room.

—*The Great Hall*. Stretching the length of the building, the hall is lined with display cases featuring museum-quality exhibits of Notre Dame research. At the hall’s southern end, projectors located under each of the upper floors will show looping films covering various science topics on the white space of the opposite wall.

—*The Center for Health Sciences Advising*. An expansion of the Preprofessional Studies office, the center will be open to all Notre Dame students interested in exploring careers in medicine, dentistry, public health, radiology and other health fields. Flat-panel televisions in the adjacent lobby will supplement students’ use of center resources between classes. The center will direct undergraduates to research and internship opportunities that may prepare them for professional life.

—*The Observatory*. When complete, the observatory will house a telescope unsurpassed by any other in the Midwest. Nine pedestals lining the outdoor observation deck support smaller telescopes for hands-on undergraduate learning. In conjunction with the University’s access to the Large Binocular Telescope Observatory in Arizona, the Jordan observatory represents a major step forward in the quality of students’ research opportunities in astronomy and related disciplines.

Jordan’s other major features include a greenhouse, vastly improved access to Notre Dame’s legendary collection of 600,000 plant and animal specimens in a new Museum of Biodiversity, and an advanced computing lab that will encourage new course offerings and interdisciplinary research based on computer simulations.

Jordan Hall is named for primary benefactor John W. “Jay” Jordan ’69, a Chicago-based investment executive who chairs the Investment Committee of the University’s Board of Trustees. It was designed by The S/L/A/M Collaborative of Glastonbury, Connecticut, and constructed by Geupel Demars Hagerman of Indianapolis. The older science buildings on campus will undergo renovations to better serve Notre Dame’s research faculty and graduate students.