As the temperature drops and frost cakes my windshield, ’tis the time to unpack boxes of down coats and knit mittens and perhaps make myself one of those draft-stoppers to smoosh next to the sliding patio door. For me, ’tis also the time to turn off my country music.

No, I’m not listening to Christmas music. I remain fervent that Christmas music is not to be played until after Thanksgiving, so as not to blanket a perfectly good holiday with jingling bells and jolly snowmen that we’ll all be sick of by December 26 anyway. But still, as the winds begin to wail and chase the sunshine out of town it seems my country crooners and twangy twiddling are no longer appropriate because, for me, country music is a sign of summer.

I got my license in June and waiting for me in the driveway was my dad’s beat-up ‘92 Ford pickup truck. At first it was any teenage girl’s nightmare — a beige, rusty hunk that dripped oil anywhere I parked it, idled around 10 miles per hour and had a severe femininity deficiency. It also only sat four people, unless you counted the half-seat in between the driver and passenger that required the person perched in the middle put one foot dangerously close to the gas or you threw a few people under a tarp in the bed. 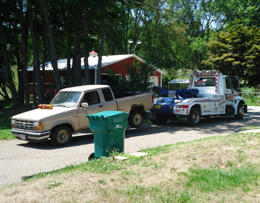 My wheels were initially embarrassing for the princess I was, but I had wheels. I soon found that despite its obvious flaws, my car allowed me freedom, not necessarily in where I went but in my choice of music. Instead of wrestling my three siblings for the radio dial as we switched between Eminem and “The Wheels on the Bus” and Mary Chapin Carpenter, my mother’s unanimously dreaded choice, I now had complete control of what I listened to.

I almost think tuning into the country station began as a joke. Here I was, a 16-year-old driving a pickup, and a few fiddles felt fitting. But what began in jest became a melody and place I felt most comfortable. I found myself driving with the windows down (there was no ac), eating blueberries out of a brown paper bag, tapping my leather cowboy boots as Tim McGraw belted on the radio, feeling young and liberated. I saved up for tickets to country music concerts and have now seen everyone from Rascal Flatts to Kenny Chesney to the Band Perry, nearly always outdoors in the heat of summer.

We recently pitched the truck after it had served my family well for nearly two decades, but even as I drive my Passat with functioning air conditioning I haven’t shaken the habit of driving with the windows down when I listen to country music. But now that it’s too cold to leave the windows open, I find myself dreading the lyrics “I got my toes in the water, ass in the sand, not a worry in the world, a cold beer in my hand” as I try to heat my engine. Instead I tinker with the knob and find a station playing Mumford and Sons or Flo Rida or whoever doesn’t sound like they’re recording from somewhere sunny.

In the words of the Zac Brown Band, “I saw goodbye in her eyes.” Yes, yes you did, all my country artists. I’m saying farewell for now, but with the first burst of sunshine come spring I’ll be back with the window rolled down.