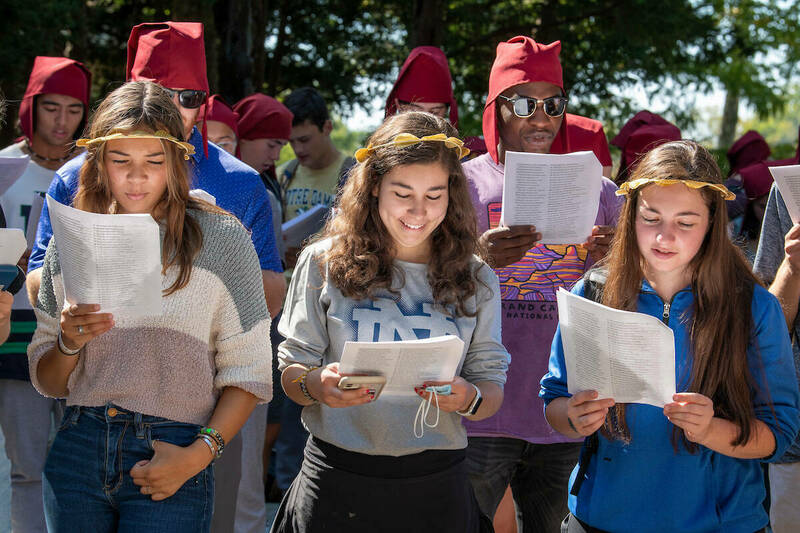 Adorned in laurels and cappucci in Dante’s honor. Photography by Barbara Johnston

Football season at Notre Dame is incomplete without the cappuccio a gota. Never heard of it? It’s not a pumpkin drink from Starbucks or a line from an obscure Catholic hymn. This “cheek-shaped hood” is most commonly seen adorning statues of the Italian poet Dante Alighieri.

And on one Friday each autumn, hundreds of cappucci adorn the heads of smiling Notre Dame students and faculty as they celebrate “Dante Now!” in the poet’s honor. This year, the commemoration took place October 1, as the Fighting Irish geared up to face Cincinnati.

It’s a special year for Dante fans: the 700th anniversary of Dante’s death, which prompted a papal apostolic letter and celebrations around the globe. Ted Cachey, professor and Ravarino Family Director of Italian and Dante Studies, says the annual “Dante Now!” event is a lighthearted way to share the poet’s influence.

“Dante is such an important author, and popes have been writing letters and encouraging the study and reading of Dante over the last century or more,” he says. “It’s 2021, which is the anniversary of the death of Dante worldwide . . . so we want to have a special edition of ‘Dante Now!’”

The event began over a decade ago, a time in America when malls and college campuses alike were overrun with flash mobs, a spirit “Dante Now!” still embodies. Cachey says that the elaborate costumes and pop-up nature were partially inspired by the craze. But instead of a chart-topper from Justin Beiber, the songs at this event have been around since the 1300s.

Senior Hayleigh Rockenbach began her day with a crowd favorite, Canto 5 of the Inferno, which details the tragic affair of young sweethearts Francesca and Paolo.

Professor Alessia Blad-Miller, director of the Center for the Study of Languages and Cultures and another of the event’s organizers, said Canto 5 is her favorite of the day.

“When you talk about it with students, there is so much that is so current still in their story,” she says. “It is a story of betrayal and lovers and passion, and students absolutely love it.”

The faux laurels of Rockenbach’s cappuccio fluttered in the wind as she related that story to a small crowd in front of the Golden Dome. A sociology major, she has studied Italian since her freshman year. Though she has never attended “Dante Now!” before, she said the anniversary deserved celebration.

She wasn’t the only one. Initially, the event grew out of an annual lecture on Dante hosted by the Center for Italian Studies and the Devers Family Program for Dante Studies. Starting during the 2012 football season, students and faculty would rove campus on Friday before a home game, reciting pieces of the Divine Comedy and eventually make their way to the lecture.

The spectacle of the afternoon’s “community recitation” portion often confuses and entices football fans as they explore the university.

“People will say ‘What language is that?’ And then we give them the script,” Cachey says. “Sometimes people will actually join the student groups that are circulating, and then they’ll follow and come to the lecture.”

It’s not just tourists who take notice. Blad-Miller recalls a time when Father Jenkins bumped into her cohort in front of the Main Building.

In their red cappucci, the crowds are hard to miss. Two to three hundred students join the ranks from all levels of Italian studies. Blad-Miller says this range is part of what makes “Dante Now!” so popular.

“It would have been easy to have only certain people participate, right? The graduate students at the upper level Italian classes,” she says. “But we decided to extend it to the undergraduate classes, the 101, so students that literally two weeks ago didn’t speak a word and they started with the alphabet, and here they are in October this year, reciting entire canti.”

The event’s popularity, especially among visitors, owes much to its finale. Just before the lecture, the crowds make a mini-pilgrimage to the Grotto. Packed tightly together, they recite the first 21 lines of Book 31 of the Paradisio: Dante’s prayer to the Virgin Mary.

Cachey said that throughout the day, but especially at the Grotto, the beauty of Dante’s writing shines through.

“I’ve been teaching Dante for more than 30 years now here at Notre Dame, and after a while it kind of teaches itself,” he says. “It engages the reader with this powerful poetry, in a way that’s just irresistible.”