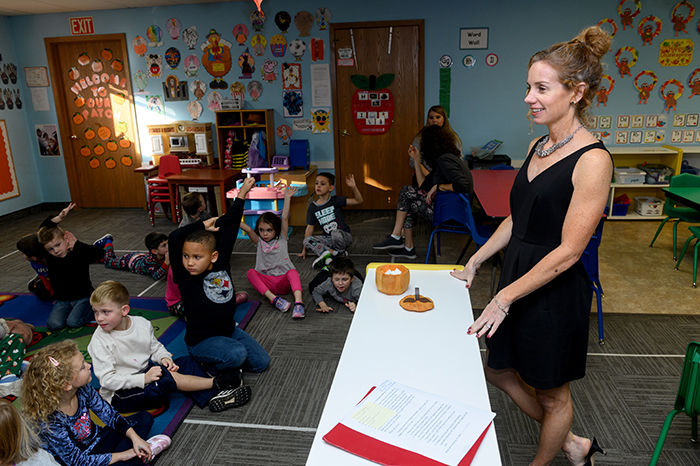 ‘I give them concrete ways to be happier and more productive,’ says Liz Aquino ’96. Photo by Justin Merriman

Shortly after graduating from Notre Dame with a psychology degree, Elizabeth Aquino ’96 was surrounded by a group of people whose jobs had forced them to master the art of manners: fundraisers. At the time, she was the director of meetings and education at the Association for Healthcare Philanthropy. She was inspired.

“Watching them was amazing,” Aquino says. “They always had their A-game because they were fundraising. I would watch the conversations they had so gracefully despite the uncomfortable situation they were in.”

Hoping to learn how to become a better communicator, Aquino studied education at the University of Virginia and ended up working toward a teaching certification, which she received in 2004. She then began teaching first and second graders just outside Washington, D.C.

In her first class, 20 of the 23 children she taught were immigrants. Teaching addition and spelling was important, but the students — and sometimes their parents — required attention in less concrete but equally valuable subjects.

“It was fascinating to watch them try to navigate this world with no role models of what was culturally acceptable,” Aquino says. “They didn’t have the technology we do now, where they could have learned on YouTube, so that’s when I started teaching manners.”

She did that in school and through the parks department in Fairfax County, Virginia. Aquino taught 7-year-olds to make eye contact with adults in order to focus on conversations. Inappropriate questions were identified and discouraged, such as asking other children how much money their parents made. Compliments, on the other hand, were encouraged. Aquino saw them as good icebreakers for children who were not yet comfortable speaking English. Much of the time, she says, it was the parents who would come to her with questions.

Aquino moved to Pennsylvania in 2010, and when she became a school librarian a few years later, she encountered a very different group of children — homogeneous, all U.S.-born — with social struggles very similar to that group of Fairfax second graders. Aquino felt compelled to teach manners full-time, which she does now in the Pittsburgh area through her Good Manners Group — though she doesn’t always advertise the name to her students.

“I never start by saying, ‘I’m here to teach you manners,’” Aquino says. “I just want to show kids tangible, tactical ways they can be polite. I give them concrete ways to be happier and more productive and to have that same effect on people around them.”

For Aquino, manners instruction is a three-act process in which she must navigate the roles of teacher, coach and motivational speaker all at once. She studies YouTube videos of different speakers to emulate how they reach their audiences. She studies coaching strategies — including those of former football coach Lou Holtz.

Aquino offers private lessons to children between the ages of 3 and 17, which requires different approaches depending on age and temperament. Some kids she calls “rebels” — those who don’t want to be told what to do. Others are “questioners” — those who will do what’s asked of them only after a thorough explanation of the reasoning behind the request.

She also offers tips that are simple and applicable to anyone. For example, she suggests living by “the one-minute rule”: If a helpful task can be done in that amount of time — like picking up books or dirty clothes off the floor — do it right away. She teaches “SLANT listening,” an acronym to remember these rules for conversation: sit up, lean forward, ask questions, nod your head, track the speaker.

“I tell them to close their eyes and imagine a world where everyone is polite and has good manners,” she says. “Or I’ll try to make them see — do you want to be someone who comes off as unhappy or unfriendly? I want it to be their decision. I want them to experience firsthand that ‘My teacher helps me more when I don’t shout out,’ or ‘My house is happier when I offer to help with dinner.’”

News of Aquino’s private lessons spread through word of mouth and she began receiving calls from parents and grandparents concerned about their children’s social prowess in different situations. Tania Garofoli, a fifth-grade teacher in the Pittsburgh area, heard about Aquino’s services on television and thought that learning etiquette would be valuable for her preteen students. For the past seven years, Aquino has visited Garofoli’s classroom to teach best practices for phone calls, family meals and movie theaters.

“I get responses back from parents about seeing the things that they’re learning about happening at home,” Garofoli says. “These lessons are really important in this day and age, since kids take a lot of things for granted with the internet and social media for social interactions. This is a good eye-opener for them.”

Aquino has worked with children who need preparation for a formal seven-course meal and others who have only ever eaten out at McDonald’s. She teaches them the universal nature of manners and how to apply them to their lives outside school.

And she sees positive changes, such as students starting to say good morning to their bus drivers or hanging up their coats when they get home. From those small acts, they develop a sense of how to navigate new situations with confidence and finesse.

Kelly Nicholson began searching for etiquette classes for her daughter Isabella three years ago. Isabella, who is now 7, works with Aquino once or twice a year on table manners and invitations for special occasions.

“When I teach Isabella something, I’m the mother, so she’s going to not get it as much as when I have an outside source come in and reinforce it,” Nicholson says. “When Liz comes in, it reinforces very well, and we can refer back to it later.”

Aquino presents most often to groups like parent-teacher associations, Girl Scout troops and volunteer organizations. She focuses on topics like introductions, sincere apologies, sportsmanship and stepping out of comfort zones — skills that give students a “competitive advantage” socially, especially now that so many are dependent on electronic communication.

Some lessons focus on avoiding the negative effects of technology on social graces and attention spans. She teaches thank-you-note writing and, for older students, job-interview etiquette. Group lessons end with salutes, an opportunity for students to congratulate each other for their acts of kindness.

During Aquino’s time at Notre Dame, she picked up public-speaking skills in some classes and behavioral-analysis skills in others, both of which have become crucial in her career. But what stood out to her most was the selflessness of her fellow students.

“A lot of high schoolers who are going to Notre Dame, including myself, were high achievers who were focused on themselves,” Aquino says. “But when I got there, by watching the other students and teachers and seeing how service-oriented they were, it inspired me to ask, ‘How can I help other people?’ And after I got my teaching job and I saw that need, I asked again, ‘How can I really help these people become more successful?’”