One cold winter morning, over 20 years ago when the new issue of the Notre Dame Magazine arrived in our mail, I recall that I was stunned by the cover. It was as though the artist who had created it had stepped into a very vivid dream I had recorded in my personal journal in 1983, almost 10 years earlier. In my long-ago dream there was a procession of priests walking down the street toward our parish church to welcome our new pastor. In the dream, our recently deceased pastor appears quite alive and is dressed in brilliant gold and white satin robes. He is radiant! He reassures me that he is very happy in Eternal Life. He hugs me and returns to the procession of priests. 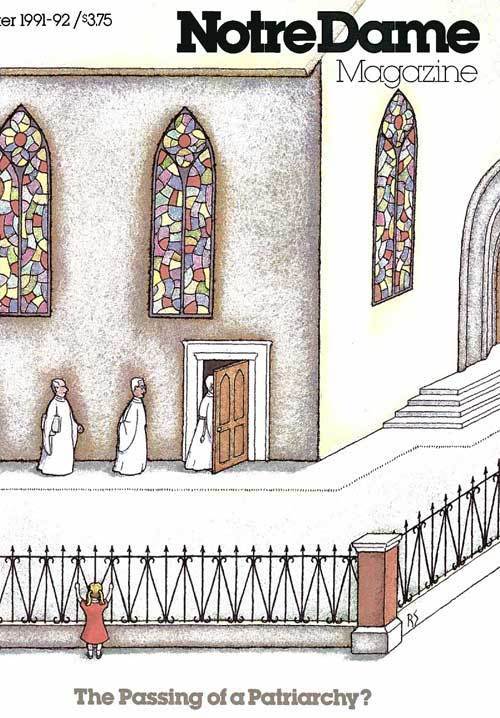 The church in my dream is surrounded by a wrought-iron fence, similar to the one pictured in the magazine, spikes and all. Suddenly in the dream, I realize that the new pastor is arriving but she is outside of the fence while the priests have moved inside. The new pastor finds that the gate has been closed and locked. She begins running, frantically searching for an opening in the fence so she can get into the church. She sees that the spaces between the bars are small and the spikes running along the top are foreboding. Soon, she does find a place where she can fit through. But the pastor does not look like the little girl with pigtails as illustrated on the cover — in my dream, this woman is actually me!

Undoubtedly the artist and I had both found images in the collective unconscious, images that illustrate patriarchy in the hierarchy of the Catholic Church. But as Pope Francis pledges to examine the role of women, among other subjects, in the Church, there is potential to change those images.

I had sought to do just that from the 1970s. From early childhood, I was aware that I was receiving and giving spiritual guidance, and my work as a registered nurse affirmed that belief. However, the actual call to chaplaincy came unexpectedly from my husband, Walt ’58, early in 1974. While awaiting word on the condition of our son who was being treated in the emergency room at Lutheran General Hospital, one the hospital chaplains, a CSC priest, visited us and shared his comforting presence and prayers while making his rounds in the family waiting area. When the chaplain left us, my husband shocked me when he said: “This is the work that you should be doing; that is the way you are all of the time.”
It seems that I squeezed through the fence when, in 1974, I was accepted into the Clinical Pastoral Education Program at Lutheran General Hospital in Park Ridge, Illinois. Soon after completing that program, I was employed as a pastoral associate in a local parish and subsequently left that position to begin what would become 22 years of employment as a chaplain at the hospital. My work was certified by the National Association of Catholic Chaplains and endorsed by the Chicago Archdiocese. Throughout those years, I participated in the education and supervision of seminarians and lay persons who were preparing for various roles of ministry in the church.

I recall being overwhelmed at times as I realized that I was embarking upon something that would have impact far beyond me and these events. Could a Catholic chaplain, bringing pastoral care to Catholic patients and their families, possibly be a woman? This was officially a new role for women in the Church. I had to get it right.

Years later, the Notre Dame Magazine cover and insightful stories which accompanied it made it clear that the door that had been opened a bit for me in the mid-1970s had not swung open much more by 1991, or even now in 2014. The question is still there: Has there been a passing of the patriarchy?
Lay women are increasingly engaged in various ministries and administrative roles within the church. However, the hierarchy has continued to resist mandating women for the “priestly” work of spiritual care.

Pope Francis’ remarks are renewing my hope that the spikes along the fence are really gone, the spaces between the uprights expanded and, some day, the gate, the door to the church and the way to the altar will be open to women.

Florence Flynn Smithe retired as a hospital chaplain 20 years ago. Now at age 76, she finds joy in family life as the wife of Walt ’58, mother of seven children, including Walter ’89MBA, grandmother of 19, including Maureen ’02, and great-grandmother of 12. Email her at flosmithe@gmail.com.